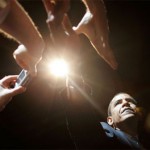 10 Quotes By Barack Obama About Islam

10 Quotes By Barack Obama About Christianity

#7 “I find it hard to believe that my God would consign four-fifths of the world to hell.  I can’t imagine that my God would allow some little Hindu kid in India who never interacts with the Christian faith to somehow burn for all eternity.  That’s just not part of my religious makeup.”

#8 “Those opposed to abortion cannot simply invoke God’s will–they have to explain why abortion violates some principle that is accessible to people of all faiths.”

#9 On his support for civil unions for gay couples: “If people find that controversial then I would just refer them to the Sermon on the Mount.”