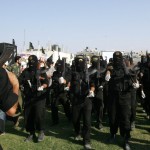 The 13-story, $100 million Islamic mosque that is slated to be built just two blocks from ground zero in New York City has been making a ton of national headlines over the past week, but the truth is that this is far from an isolated incident.  Islam is rapidly growing and is gaining tremendous influence inside the United States.  50 years ago, there were very few mosques inside the United States and Muslims were a very, very small minority.  But today all of that has changed.  Even as Christianity is losing millions of adherents in the United States, Islam is experiencing explosive growth.  The Council on American-Islamic Relations says that there are 7 million Muslims inside the United States in 2010, and huge new mosques are going up from coast to coast.  Each year, increasingly large numbers of Muslims immigrate to the United States both legally and illegally.  But Islam is not just growing through immigration.  All across America, substantial numbers of Americans are converting to Islam each year, and this is particularly true in U.S. prisons where radical Islam has found a ready-made pool of disaffected young men to exploit.  The danger signs are there.  Are we going to start paying attention to them?

The following are 12 signs that show the tremendous progress that radical Islam is making in America in 2010….

1 – According to Ihsan Bagby, a professor of Islamic Studies at the University of Kentucky, there were only approximately 1,200 mosques in the United States ten years ago.  Today there are approximately 1,900.

2 – An rapidly increasing number of U.S. public schools are actually adjusting their school calendars for the observance of Islamic holidays.

3 – Less than 100 feet from where it is said a plane hit the Pentagon on 9/11, Muslim military personnel bring prayer rugs and gather for group worship on weekday afternoons.

5 – A survey of Muslim Americans by the Pew Research Center in 2007 found that 39 percent of adult Muslims living inside the United States were immigrants that had arrived in the U.S. since 1990.

6 – In Dearborn, Michigan one high school football team has so many Muslim players that it has moved its two-a-day summer practice schedule to between 11 PM and 4 AM during Ramadan.  This was done so that the Muslim members of the team would not be forced to practice in the heat without drinking water.

7 – In the state of Maryland, Anne Arundel County recently decided to ban sporting events on the night before Islamic holidays.  They have also placed a ban on administering tests on the dates of Islamic holidays as well.

8 – In March, the opening prayer at the opening session of the Virginia General Assembly was delivered by a radical imam.

9 – Often funded with millions of dollars from overseas, a rapidly growing number of “mega-mosques” are being constructed in communities from coast to coast.

11 – At least one researcher claims that Muslim inmates now comprise 17-20% of the total U.S. prison population.

12 – Even the current occupant of the White House, Barack Obama, goes out of his way to say nice things about Islam.  Just consider the following list of glowing statements that Barack Obama has made about Islam that we documented in a recent article….

Meanwhile, Christians that attempt to express their faith and share the gospel of Jesus Christ with Muslims are increasingly being arrested and thrown in jail.  Just consider the following examples….

*Four Christians face fines of up to $500 each and up to 93 days in jail for sharing the gospel with Muslims on a public sidewalk outside of an Islamic street festival in Dearborn, Michigan.

*Two other Christians were arrested recently for sharing the gospel and singing hymns on a public sidewalk outside an Islamic mosque in the city of Philadelphia.

These Christians were simply exercising their free speech on a public sidewalk and they got thrown into prison for it.

It turns out that in America in 2010 it is much more important to protect Muslims from being offended than it is to allow Christians to exercise their constitutional rights.

The truth is that the spread of Islam inside the United States is not harmless.  In fact, radical Islamic groups are setting up training compounds from coast to coast and federal authorities don’t seem to be doing anything about it.

For example, a video released by the Christian Action Network shows members of the “Muslims Of America” participating in paramilitary style training outside of their compound in upstate New York, near the town of Hancock.

The “Muslims of America” is the name that an organization known as Jamaat ul-Fuqra uses inside the United States. They are a militant jihadist organization based in Pakistan.

In the video, you can see footage of members of Muslims in America being trained in combat techniques and the use of assault weapons.

Oh, but it is so important for us to be “tolerant” of them and to let them conduct paramilitary training on our soil.

Meanwhile, it is getting to the point where if a Christian even tries to share the gospel with a Muslim they are thrown into jail.

What in the world is happening to the United States of America?