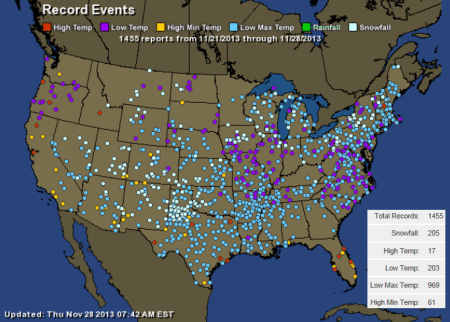 Back in 2009, Al Gore boldly declared that “the entire north polar ice cap during some of the summer months could be completely ice-free within the next five to seven years.”  Well, it turns out that was a lie along with almost everything else that Al Gore has been peddling.  The truth is that the polar ice cap is actually growing.  It is about 50 percent larger than it was at this time last year.  And as you will read about below, a shocking UN report that was recently leaked shows that the planet has actually not been warming for the past 15 years.  So if you are breathlessly anticipating that “global warming” will soon bring on the apocalypse, you can stop waiting.  On the other hand, there is rising concern about what “global cooling” will soon do to the planet as we suffer through the beginning of the coldest winter in decades.  Thanks to an unusually quiet solar cycle and an unusually high number of volcano eruptions, global temperatures have been falling.  And if this cold weather persists, that could lead to massive global problems.  Periods of very low temperatures throughout history have resulted in mass crop failures and widespread famines.  Could that soon happen to us?  The following are 16 signs that “global warming” was a lie and that we have now entered a period of global cooling…

1. According to a leaked UN report that absolutely rocked the “global warming” believers, the earth has not gotten any warmer for the past 15 years.

2. The amount of ice covering the Arctic is up by 50 percent compared to this time in 2012.

3. In just one week in late November, a combined total of more than 1000 new cold temperature and snowfall records were set in the United States.

4. In just one week in December, a combined total of more than 2000 new cold temperature and snowfall records were set in the United States.

5. On December 15th, 53 percent of the United States was covered in snow.  That was the highest level on this date in 11 years.

6. A snowstorm that spanned more than 1,000 miles slammed into New England on Sunday.

7. Some areas of upstate New York were hit with about six feet of snow a few days ago.

8. Chicago just experienced that coldest temperatures that it has seen in December in nearly 20 years.

9. On December 7th, Eugene, Oregon recorded the lowest temperature that it has seen since December 11th, 1972.

10. A few days ago, three feet of snow closed roads in Jerusalem.  It was the worst snow storm in Israel since 1953.

11. Heavy snow also fell on parts of Saudi Arabia.  That was considered to be extremely unusual.

12. The recent snowfall in Turkey was so bad that it closed 900 roads.

13. Temperatures have dropped so low that some Syrian war refugees are actually dying from the cold.

14. Cairo, Egypt just had the first snowfall that it has experienced in 100 years.

15. It was so cold in Canada recently that the Arctic Winter Games biathlon trials were forced indoors.

16. According to NASA satellite data, a temperature of minus 135 degrees Fahrenheit was recorded in Antarctica back in July.

So why is all of this happening?

Well, the number one factor affecting our climate is the giant ball of fire called the Sun that our planet revolves around.  As I detailed in a previous article, solar activity has dropped to a 100 year low.  The following is how a Space.com article recently described what we are currently experiencing…

The sun’s current space-weather cycle is the most anemic in 100 years, scientists say.

Our star is now at “solar maximum,” the peak phase of its 11-year activity cycle. But this solar max is weak, and the overall current cycle, known as Solar Cycle 24, conjures up comparisons to the famously feeble Solar Cycle 14 in the early 1900s, researchers said.

“None of us alive have ever seen such a weak cycle. So we will learn something,” Leif Svalgaard of Stanford University told reporters here today (Dec. 11) at the annual meeting of the American Geophysical Union.

Another factor that is causing all of this cold weather is a dramatic rise in volcanic activity.  Throughout human history, volcanic eruptions have produced some of the coldest winters ever recorded, and in 2013 we have witnessed a record number of volcanic eruptions.  Something appears to be happening to the crust of the earth, and that is one of the reasons why I included the future eruption of Mt. Rainier in my new novel.  The mainstream media does not talk about this much, but right now we are seeing a stunning rise in volcanic activity all over the planet.

The truth is that volcanoes can influence our climate far more than normal human activity ever possibly could.  When a tremendous amount of volcanic debris gets ejected into the atmosphere, it can have a huge impact on global temperatures and the consequences can be quite dramatic.  The following historic examples come from Wikipedia…

So are we now heading for a similar period of time?