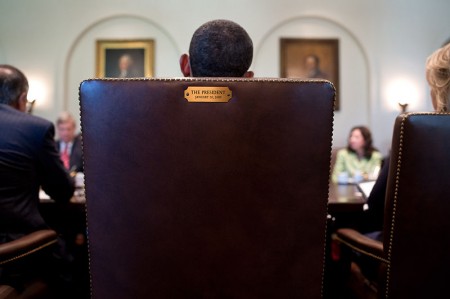 What is the number one job of the U.S. government?  Well, at this point the federal government in spending more time and money on redistributing wealth than it is on anything else.  In fiscal year 2012, 62 percent of the federal budget will be spent on entitlements.  How much farther do we have to go until everyone finally admits that we have become a socialist nation?  Our government has become the largest engine of wealth redistribution in the history of the world, and the redistribution of wealth has greatly accelerated during the presidency of Barack Obama.  Yes, wealth redistribution as a share of the economy also grew under George W. Bush and Bill Clinton, but Barack Obama has taken things to an entirely new level.  Back when Ronald Reagan took office, less than 30 percent of all Americans lived in a home where at least one person was receiving government benefits.  Today, an all-time record 49 percent of all Americans live in a home where at least one person receives government benefits.  Of course we always want to help the poor, the needy and those that cannot help themselves, but things in this country have gotten way out of balance.  And most Americans agree with me – according to a new Rasmussen survey, 64 percent of all Americans believe that too many Americans are dependent on government assistance.  We have become a nation that expects the government to take care of us from the cradle to the grave, and all of this government dependence is causing our debt to spiral completely and totally out of control.

Yes, without a doubt we will always need a safety net.  Nobody wants to see any American go without food or sleep under a bridge.

But we simply cannot afford to have more than 100 million Americans relying on that safety net.  It was never designed to accommodate so many people and the entire system is going to fail if we continue with this foolishness.

Sadly, a large percentage of the American people have become trained to vote for the politician that will promise them the most goodies.  Government benefits have become a way to “buy votes”, and it is deeply corrupting our system.

In such an environment it probably should not be a surprise that we elected a president that has publicly declared that “I actually believe in redistribution.”

But what kind of a society will we have if we continue down this road?  Will we have a society where the “dependent class” is always clamoring for more and where the “working class” has no ambition to work hard and make money because the government is just going to come along and take most of it away?

Socialism does not work.  But that is where the United States (along with most of the rest of the world) is headed.

The following are 17 numbers that prove that the redistribution of wealth has greatly accelerated since Barack Obama has been president….

#1 According to the U.S. Census Bureau, an all-time record 49 percent of all Americans live in a home where at least one person receives financial assistance from the federal government.  Back in 1983, that number was less than 30 percent.

#3 The number of Americans enrolled in the food stamp program has grown from about 17 million in 2000 to 31.9 million when Barack Obama took office to 46.6 million today.

#4 The number of Americans receiving Social Security disability payments has risen by more than a million since Obama has been in office.

#5 The growth of government dependence is far outpacing job growth in the United States even though we are supposed to be in an “economic recovery”.  Between the beginning of April and the end of June, the U.S. economy added only 200,000 new jobs, but 246,000 more Americans were added to the Social Security disability program and 265,000 more Americans were added to the food stamp rolls.

#7 Federal housing assistance outlays increased by a whopping 42 percent between 2006 and 2010.

#11 It is being projected that Obamacare will add 16 million more Americans to the Medicaid rolls.

#12 Medicare is also growing by leaps and bounds.  As I wrote about the other day, if current policies continue it is being projected that the number of Americans on Medicare will grow from 50.7 million in 2012 to 73.2 million in 2025.

#13 Thanks to our foolish politicians (including Obama), Medicare is facing unfunded liabilities of more than 38 trillion dollars over the next 75 years.  That comes to approximately $328,404 for each and every household in the United States.

#15 As I have written about previously, the number of Americans living below the poverty line has risen by 6 million since Barack Obama became president.

#16 Overall, the amount of money that the federal government gives directly to the American people has risen by 32 percent since Barack Obama first took office.

#17 When you account for all government transfer payments and all forms of government employment, more than half of all Americans are now at least partially financially dependent on the government.

The other day, the mainstream media went crazy over the “scandal” that Mitt Romney said the following at a fundraiser….

There are 47 percent who will vote for the President, no matter what. All right, there are 47 percent who are with him, who are dependent on the government, who believe that they are victims, who believe the government has a responsibility to care for them, who believe that they are entitled to health care, to food, to housing, to you name it…. Forty-seven percent of Americans pay no income tax. So our message of low taxes doesn’t connect. And so my job is not to worry about those people — I’ll never convince them that they should take personal responsibility and care for their lives.

The mainstream media howled in outrage about this, but to a certain extent Romney was right.

Of course the Republicans should have never nominated Romney, and Romney is running one of the most inept campaigns in the history of American politics, but Romney actually hit on some truth in that quote.

You can debate about what the exact number is, but the reality is that a growing number of Americans are satisfied with being dependent on the government and believe that the government should have a responsibility to take care of them.

Not that it is wrong to help the poor.  Of course not.  There are many people out there that honestly cannot take care of themselves, and almost everyone needs a helping hand at some point in their lives.

But there is a balance, and as a nation we have gotten way, way out of balance.

Of course it certainly doesn’t help that most of the burden for paying for all of this welfare always seems to end up falling on the middle class.

The wealthy have become absolute masters at avoiding taxes.  For example, Mitt Romney paid an effective tax rate of only 14.1 percent for the 2011 tax year.

If I could pay an effective tax rate of only 14.1 percent to the federal government I would be screaming for joy.  So would most middle class Americans.  Unfortunately, we don’t have the resources to hire expensive tax attorneys who know how to exploit the thousands upon thousands of loopholes in the tax code.

Our tax code is a complete and total abomination and should be immediately abolished.  Unfortunately, neither political party is suggesting that we do that.  In fact, both political parties seem to really like things just the way that they are.

You see, the reality is that socialism is really, really expensive.  In fact, the U.S. national debt has increased by 51 percent since Barack Obama took office.

Since Obama was inaugurated, the U.S. national debt has grown by more than it did from the time that George Washington became president to the beginning of Bill Clinton’s second term as president.

That is no small feat.

The federal government continues to throw money around as if there is no tomorrow, but the truth is that tomorrow always comes and our children and our grandchildren are going to be less than thrilled that we expect them to pay the 16 trillion dollar debt that we have foolishly run up.

But the mainstream media says that everything is just fine.  They are constantly praising Barack Obama, and top financial journalists such as Paul Krugman of the New York Times are proclaiming that the answer to our problems is to borrow and spend trillions more.

Thankfully, an increasing number of Americans are waking up to this nonsense.

According to a new Gallup survey, an all-time record high 60 percent of all Americans have little or no trust in the mainstream media.