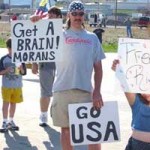 As bad as things have gotten in the United States, is there anyone who has considered whether America is now at the point where we may be simply too stupid to continue as a nation?  Before you scoff, just consider the 18 items discussed in this article.  You have to admit that they represent stupidity to the extreme.  Certainly it would be hard to argue that the vast majority of Americans living today are “founding father” material.  So can this be turned around, or have we now reached the point where the stupidity cannot be reversed?

Consider the 18 signs of America’s stupidity posted below and then leave a comment with your opinion…..

#1) The U.S. government is supposed to be “by the people” and “for the people”.  So to represent the interests of ordinary Americans, we have elected 237 millionaires to the U.S. Congress.

#2) As rich as the United States supposedly is, the truth is that half of all U.S. kids will be on food stamps during some point of their lives.

#3) The new airport security scanners that give security screeners a clear view of what your body looks like under your clothing also “tears apart your DNA”.

#4) The U.S. Fifth Circuit Court of Appeals has ruled that landowners in Mississippi have “standing” to sue oil and coal companies for emitting greenhouse gases. If you are an American landowner now you can get rich by suing any company that emits carbon dioxide too.  Meanwhile every last ounce of U.S. heavy industry will race to move their operations overseas.

#5) Tens of millions of Americans follow Al Gore, the “eco-prophet” who is trying to “save the environment” by viciously attacking carbon dioxide – one of the fundamental building blocks of life on earth.

#6) The fear of “climate change” is being used as a pretext to get world leaders to sign the Copenhagen Treaty which would tranfer huge portions of U.S. sovereignty to international bodies and which would be a gigantic step towards world government.

#7) A new bill in the U.S. Congress would give the Federal Reserve (the very bozos who created the financial crisis) more power over the U.S. economy than any agency of the U.S. government.  Considering the fact that the Federal Reserve is a privately owned central bank that has been systematically draining the wealth out of America’s middle class, is that really such a good idea?

#8) The U.S. Transportation Security Administration has stationed specially trained “behavior-detection officers” at 161 U.S. airports.  Anyone who has watched “Minority Report” knows that the idea of “pre-crime” does not work.   What kind of bizarre Big Brother police state are we creating anyway?

#9) With all of our amazing technological advances, the truth is that we still aren’t smart enough to even deal with a raging epidemic of bedbugs in New York City.

#10) With all of our big talk about “the war on terror”, we have still allowed radical Islamic jihadists to infiltrate every branch of the U.S. military.

#11) In fact, the U.S. allows Islamic jihadist training centers to openly operate all over America.

#12) Our Secretary of State believes that there are too many people in the world and that we need to start finding ways to get rid of some of them.

#13) The U.S. has abortion mills running all across the nation where employees are pushed to meet “abortion quotas” in order to boost profits.

#14) The CIA reportedly had a practice of sending terror suspects to prisons in Uzbekistan – a place where widespread torture practices include raping suspects with broken bottles and boiling them alive.  Then we have the gall to wonder why the rest of the world hates us so much.

#15) According to the Pentagon, more than a third of American youth of military age are unfit for service, mainly because they are too fat or sickly.  What a great generation of young men we have, eh?

#16) 45 percent of U.S. doctors say that they would consider shutting down their practices or retiring if Obamacare is ultimately adopted, the American people have been so outraged by the health care reform plan that there were near riots at town hall meetings all over the country this summer, and yet the U.S. Congress is still pushing it down the throats of the American people.

#17) One company in Arizona is reportedly freezing the heads of their customers when they die so that later they can bring them back to life and cure whatever had ailed them (or download their brains into a computer).

#18) Lastly, we are openly teaching our schoolchildren that it is perfectly acceptable to sing songs of praise and worship to our president.  Well, at least if he is a Democrat.