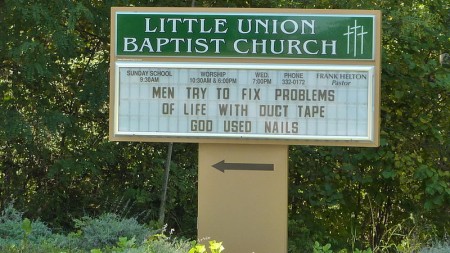 The decline of the Christian faith in America is accelerating.  The results of a new survey conducted by the Pew Forum on Religion and Public Life were just released, and the numbers are staggering.  The percentage of all U.S. adults with no religious affiliation at all is nearly up to 20 percent.  Even more frightening, 32 percent of all U.S. adults under the age of 30 have no religious affiliation whatsoever.  Meanwhile, the percentage of the U.S. population that is Protestant has hit an all-time low.  Sadly, this new survey just confirms what a whole bunch of other surveys have shown over the past few years.  The truth is that America is very clearly turning away from Christianity.  Right up front I will disclose that I am a Christian, so I consider this to be a very bad thing.  Others that are reading this may consider the statistics below to be wonderful news.  But what we should all be able to agree on is that the long-term trends clearly show that Americans are increasingly rejecting the Christian faith.  So what does this mean for the future of our nation?  Where does America go from here?  Those are very interesting questions.

But now things are dramatically changing.

Posted below are 19 numbers which prove that America is turning away from Christianity.  The first 10 numbers are from the new survey conducted by the Pew Forum on Religion and Public Life that was just released on Tuesday….

#2 The number of Americans with no religious affiliation has grown by 25 percent over the past five years.

#4 88 percent of those that are religiously unaffiliated “are not looking for religion”.

#6 The religiously unaffiliated now make up 24 percent of all registered voters “who are Democrats or lean Democratic”.

#9 51 percent of all U.S. adults believe that churches and other religious organizations “are too concerned with money and power”.

#10 66 percent of all U.S. adults believe that religion is “losing its influence on American life”.

Here are some more numbers which show that Christianity is declining in America….

#11 According to the U.S. Census Bureau, the number of Americans with “no religion” more than doubled between 1990 and 2008.

#13 A study conducted by the Barna Group discovered that nearly 60 percent of all Christians in the 15 to 29 year old age bracket are no longer actively involved in any church.

#14 As I have written about previously, Islam is now the fastest growing religion in America according to the latest U.S. Religion Census.  Between 2000 and 2010, the number of Muslims living inside the United States increased by approximately 1 million to a total of 2.6 million.

#15 According to a professor of Islamic Studies at the University of Kentucky, there were approximately 1,200 mosques in the United States back in the year 2000.  Now there are more than 2,100.

#16 It is being projected that the percentage of Americans attending church in 2050 will be about half of what it is today.

#17 One survey conducted a while back found that 52 percent of all American Christians believe that “at least some non-Christian faiths can lead to eternal life”.

#18 According to a study done by LifeWay Research, membership in Southern Baptist churches will fall by close to 50 percent by the year 2050 if current trends continue.

#19 LifeWay Research has also found that 46 percent of all Americans never even think about whether they will go to heaven or not.

If you are a Christian, those numbers should be very sobering.  The Church is most definitely losing ground in the United States.

It should be noted that Christianity is definitely not in danger of disappearing.  The Christian faith is experiencing absolutely explosive growth in Africa, South America and even in places such as China.

According to the Pew Forum on Religion and Public Life, there are approximately 2.2 billion Christians in the world.  That makes it the largest religion in the world by far.

But in the United States, Christianity is most definitely in decline.

Do you believe that this is a good thing or a bad thing?

Where does America go from here?