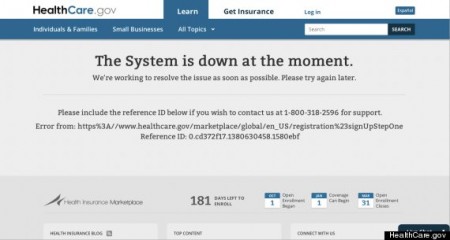 The launch of Obamacare has been a complete and total nightmare so far.  The “online exchanges” are constantly crashing, there are endless glitches and delays, and many of the people that actually have been able to successfully register for an account are discovering that health insurance premiums under Obamacare are far higher than what they are used to paying.  In fact, as I wrote about the other day, some Americans that have had their old policies canceled by their insurance companies are discovering that their health insurance costs will double or even triple under Obamacare.  What a great “success”, eh?  Under Obamacare, Americans are going to pay more for health care, they are going to have more limited health care options, they are going to be subjected to much more paperwork, and if they choose not to participate in the system they are going to be hit with very punitive fines.  What’s not to like?

But despite all of the negatives, a lot of Americans were actually looking forward to October 1st.  Millions of Americans rushed to the “healthcare exchanges” to get signed up for health insurance.  But what they discovered was that the websites were not ready and were constantly crashing.

One television station in Tennessee was not able to find a single person who successfully signed up for Obamacare.

Needless to say, there are a whole lot of very frustrated and very disappointed people out there right now.  The following are 21 of the best comments that have been posted on the official Healthcare.gov Facebook page so far…

21. “I am so disappointed. These prices are outrageous and there are huge deductibles. No one can afford this!”

20. “Good grief. Day three of trying and still can’t get on this website. The government KNEW about this thing going live for two years. TWO YEARS! And this is the best they could do? I shudder to think what’s going to happen once they are in control of my healthcare. They can’t even get their website functioning properly. If my business had rolled out a piece of crap that worked like this I’d be out of business.”

19. “How is it that Facebook, which is a non-essential social networking web site, can reliably handle BILLIONS of electronic interactions per second, but the Healthcare.gov site, which is literally the very heart of the Obamacare program wasn’t ready for the obvious millions of visitors that you had to know it would be receiving?”

18. “i’m just going to stop even bothering for a couple weeks or so… once the fervor dies down, hopefully i’ll be able to actually create an account!”

17. “The Federal Gov’t has ruined everything it has gotten involved in, does anybody really expect this healthcare disaster to be any different? Sorry, I’ll take the asinine fine.”

16. “And yet another day and several tries I once again keep getting nothing but a completely blank page after I log in. The top tab says ‘Successful URL’. Oh how ironic.”

15. “Didn’t these Feds ever have mothers that told them not to lie? Maybe they were raised in the wild. This system is trash. I can’t verify my identity or upload documents. Also what’s with Experian verifying ID’s? Don’t care for that at all.”

14. “I am a single mother of two, in school and working full time, living 75% below the poverty level and I DO NOT qualify for a healthcare subsidy”

12. “if you’re stupid enough to put all your banking information in to the federal governments computers you are definitely part of the problem”

10. “I have one question. What happens if I can’t afford the Affordable Health Care that you are cramming down my throat? I just ran your calculator, and if it is even close to accurate, I will have a choice…..I can pay my rent and buy groceries, or I can pay the health care premiums, move out into the streets and live under a bridge some where, and go hungry! Can I please get one of those exemption things that the President and Congress got?”

9. “I’ve been stuck at the security questions since 9am on October 1st”

7. “Here in Austin, TX have gotten to login screen three times today, wait is getting shorter, but am still getting a blank screen after getting a quick ‘authenticating, please wait’ message at top left of screen, then nothing but a blank white page and no indication that the browser is waiting for the server to do anything. Attempts to refresh the screen sends me back to the please wait screen.”

6. “I finally got past the security question problem, got my account, my verification email, and when I went to log in, it said the information was invalid.”

5. “I want to know how I am expected to pay $300+ for this and still pay my bills when the only income is $710 a month from my husband’s SSI? Am i supposed to lose my home and water and electricity or go to jail because I can’t afford this?”

4. “Government forces people to pay a new tax.  People click on website to see how much this new tax will cost them.  Website crashes in the first hour.  Government calls it a huge success.”

3. “I work a minimum wage job…how the heck can I afford health insurance and if the company doesn’t give full time? I am so angry right now…. I share housing with others because I can’t afford my own place… how do you expect people to afford obamacare if they barely get by from paycheck to paycheck????? I can’t afford a fine either! I think you are obligated to give the American people an answer and an explanation!”

2. “Y’all can kiss my butt. You got that? You want my bank account? I’ll close it. You put a lien on my house? Take it…and the mortgage too. Some things are worth fighting for, and freedom is one of them! I am sick and tired of the redistribution strategies of this socialist country and having my wages STOLEN to pay for them!”

1. The best comment was posted by a man named Will Sheehan with type 1 diabetes who was initially very excited to sign up for Obamacare.  But what he discovered while trying to sign up was absolutely horrifying…

I actually made it through this morning at 8:00 A.M. I have a preexisting condition (Type 1 Diabetes) and my income base was 45K-55K annually I chose tier 2 “Silver Plan” and my monthly premiums came out to $597.00 with $13,988 yearly deductible!!! There is NO POSSIBLE way that I can afford this so I “opt-out” and chose to continue along with no insurance.

I received an email tonight at 5:00 P.M. informing me that my fine would be $4,037 and could be attached to my yearly income tax return. Then you make it to the “REPERCUSSIONS PORTION” for “non-payment” of yearly fine. First, your drivers license will be suspended until paid, and if you go 24 consecutive months with “Non-Payment” and you happen to be a home owner, you will have a federal tax lien placed on your home. You can agree to give your bank information so that they can easy “Automatically withdraw” your “penalties” weekly, bi-weekly or monthly! This by no means is “Free” or even “Affordable.”

You can see a screenshot of his comment below… 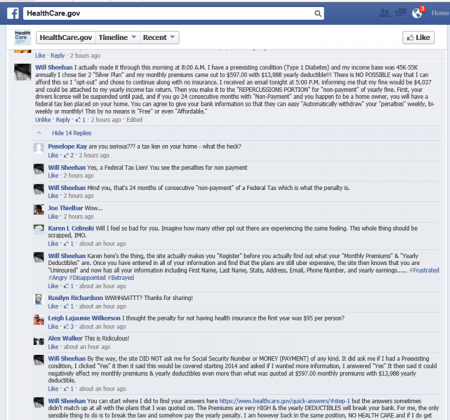 I don’t know.  This is not the way that we were told things were going to work, but when was the last time our politicians actually told us the truth about anything?

Meanwhile, most of the people who go to these websites can’t even get to the point of being able to sign up for health insurance.  Just check out what happened when a CNN reporter attempted to sign up for Obamacare…

BROOKE BALDWIN: So you guys hit a wall. we’re here in Georgia. What about other states? Similar issues?

ELIZABETH COHEN: The CNN medical team branched out. We tried in about 20 different state states. In 12 of them we hit glitches. Sometimes it made it impossible to sign up. There were error messages or that little annoying kind of twirly thing.

BALDWIN: I hate the twirly thing.

COHEN: Hate it, hate it, right? In many cases, you just couldn’t sign up.

And there have already been reports of personal information being compromised.  Just check out what happened in Minnesota…

Minnesota insurance broker Jim Koester was looking for information about assisting with Obamacare implementation; instead, what landed in his inbox last month was a document filled with the names, Social Security numbers and other pieces of personal information belonging to his fellow Minnesotans.

In one of the first breaches of the new Obamacare online marketplaces, an employee of the Minnesota marketplace, called MNsure, accidentally emailed Koester a document containing personally identifying information for more than 2,400 insurance agents, the Minnesota Star Tribune reported. MNsure was able to quickly undo the damage because Koester cooperated with them, but the incident left him unnerved.

“The more I thought about it, the more troubled I was,” Koester told the newspaper. “What if this had fallen into the wrong hands? It’s scary. If this is happening now, how can clients of MNsure be confident their data is safe?”

The Obama administration has had a couple of years to get ready for the launch of Obamacare and this is the best that they could do?

So have any of you tried to sign up yet?  If you have a story about Obamacare, please feel free to share it by posting a comment below…