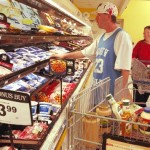 Well, it is official.  40.2 million Americans received food stamps in March, which represented a 21 percent increase from a year earlier.  That means that more than one out of every eight Americans is now dependent on the federal government for their daily bread.  But the truth is that things are going to get even worse.  The U.S. Department of Agriculture is projecting that more than 43 million Americans will be on food stamps by the end of 2011.

The old timers used to tell us that one day we would all be standing in bread lines, but this is ridiculous.

The United States is rapidly becoming a socialized welfare state and nobody seems to be able to do anything to stop it.

You see, it is not only the food stamp program that is exploding.

It seems like almost everyone is getting money from the government these days.

But of course all of these government handouts are also creating a huge problem.

It is called debt.

We have piled up the biggest mountain of debt in the history of the world and there is no possible way that we are ever going to be able to pay it off.

In fact, this crushing debt load will almost certainly destroy the U.S. economy.

But the tens of millions of Americans that are getting handouts from the government each month do not want to give them up.

In fact, it is those handouts that are keeping many of them off the streets.

Long-term unemployment has never been this bad in the United States in the post-World War II era.

In fact, 45.9% of those currently unemployed in the United States have been out of work longer than six months.  That is the highest percentage since the Labor Department began keeping track in 1948.

And the truth is that there are fewer and fewer good jobs out there.

You see, we shipped millions and millions of good jobs to other countries after our politicians promised us that “free trade” and “globalism” would be so good for us.

Well, they were good for the greedy CEOs that raked in record profits by exploiting third world labor pools, but they were not so good for the millions of Americans that have now lost their jobs.

Increasingly, the U.S. is becoming a “two tier” society.

The very rich are thriving while tens of millions of other Americans have never had it harder.

So where will all of this end?

Will we all be on food stamps someday?

This is getting ridiculous and it has to stop.

The U.S. is on the path to economic and financial oblivion.

But the politicians in Washington D.C. seem content to continue business as usual.

As long as they keep getting elected they really don’t seem to care much about what they are doing to the long-term future of this nation.

But of course ultimately it is our responsibility for electing such a bunch of absolute losers to represent us.

The truth is that the United States of America is falling apart and Obama, Pelosi and Reid are completely incapable of fixing things.

Not that the Republicans did much better when they controlled Congress and the White House.

The truth is that both parties are filled with corrupt career politicians that shouldn’t be hired to run a Burger King much less make decisions for this entire nation.

But this is where we are at.  We have come to a time of great national crisis and the leadership in Washington D.C. is pretty much completely incompetent.

So is there a way out of this mess?  Feel free to leave a comment with your opinion….