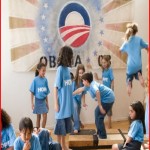 Well, the truth is that it is happening. Not just in one or two isolated cases either. But thanks to the Internet we have video of some of these songs, and we have posted 6 of them below.

This first example is freshly discovered video of school children praising Obama in a classroom setting.  It was apparently created in February 2009 after Obama was inaugurated.  The lyrics to this disturbing song are posted after the video…..

Obama is the President!
First African America in history
44th president of the United States
The ground has shifted
The world has changed!

Im going to study really hard just like Barack
Learning never ever stops
Gonna set my goals HIGH and graduate
You might be looking at the President of 2048!

We are a nation of a thousand colors, look at me
Our strength is our diversity
Walking hand in hand we sing
Each a day a little closer to the dream of Dr. King

Together we walk
Me and you
So so much work
Left to do.

This next example is the video that has been showing up all over the mainstream news lately.  It is apparently loosely based on “Jesus loves the little children”.

This very creepy song contains the very chilling line: “Red, Yellow, Black or White – All are equal in his sight”.

All are equal in Obama’s sight?

This video was reportedly filmed on or around June 19th, 2009 at the B. Bernice Young Elementary School in Burlington, New Jersey.  The lyrics to the song are posted afterwards…..

Barack Hussein Obama
He said that all must lend a hand
To make this country strong again
Mmm, mmm, mm!

Barack Hussein Obama
He said that we must take a stand
To make sure everyone gets a chance
Mmm, mmm, mm!

Barack Hussein Obama
He said Red, Yellow, Black or White
All are equal in his sight
Mmm, mmm, mm!

The next example is a well known video that exploded on to the scene during the 2008 presidential election.  The girl at the beginning of the video has a very beautiful voice, but one can only think of how horrified she will be one day to realize that she was used as a propaganda tool for Barack Obama…..

This next example has been called an “Obama Youth” video that shows students at a middle school in Missouri performing military style drills while chanting a song about how great Obama is…..

Even up in Canada kids are singing Obama’s praises.  This next video features teenagers in Toronto, Canada performing a song for Obama in school…..

Lastly, this newly discovered video entitled “Kids Rock for Barack” was apparently filmed during the 2008 presidential election campaign.  It features school children holding up pictures of Obama and singing a very creepy song about how wonderful he is…..

After watching those videos how do you feel?

We would love to get your reactions in the comments section below.

Also, please get these videos out to everyone that you know.

We have seen videos like this before, haven’t we?

Do they not bring to mind the kind of mindless praise that we have seen in the propaganda campaigns for the major socialist and communist movements of last century?

The truth is that almost every time there is a major socialist or communist revolution there is a “cult of personality” built around a “grand leader”.  Just think of any nation on earth that has adopted socialism or communism and you will see that this is true.

It is sickening for American school children to be taught to sing songs of praise for any political leader.  If you know of any other videos like this, please leave a comment and let us know.  This type of manipulation of the next generation is yet another sign of how far we have fallen as a nation.  Let us hope that the American people wake up soon.