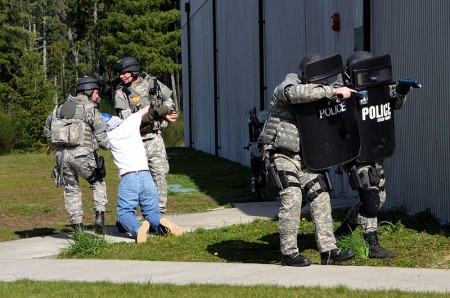 Could you imagine being fined $250 every time you have your friends come over to watch football?  Could you imagine having the government authorities take you to court over a Friday night card game?  Well, down in Venice, Florida authorities are cracking down on Shane and Marlen Roessiger for holding a Bible study in their home on Friday nights.  The meetings consist of at most 10 people gathering for a time of prayer and Bible study, but authorities in Venice insist that this is a “zoning violation” and Shane and Marlen Roessiger are being threatened with a fine of $250 per meeting.  Sadly, this is not the first time something like this has happened.  The truth is that authorities all over America are seeking to suppress home Bible studies and other expressions of the Christian faith.  It isn’t enough that they have essentially removed every trace of Christianity from public life in America.  Now they are coming after us in our own homes.  Unfortunately, this is the direction that our country is heading.  We are becoming a “Big Brother society” in which virtually every little move we make is scrutinized by government bureaucrats and control freaks.

If someone has hundreds of people over to their home on a regular basis, then yes, things like traffic congestion and noise can become an issue.

However, when the day comes that we can’t have quiet gatherings of 10 people or less in our own homes then we will know that we have entered complete and total tyranny.

Fortunately, in this case Shane and Marlen Roessiger appear to have some good legal representation on their side according to a recent Fox News article….

The Pacific Justice Institute is representing the Roessigers as they fight back against the city’s attacks. Dacus said they are hearing of a number of assaults on home Bible studies across the nation.

“They are having a specific problem with this family solely because they are having family and friends over to read the bible and pray,” Dacus told Fox News. “That may be fine in some tyrannical parts of the world. That is not okay in the United States of America.”

Even if you are not religious, hopefully you can see how their rights are being trampled.

Just think about how you would feel if you had a few friends over to discuss politics or some other topic that was very important to you.  Would you want the authorities showing up at your door?

Unfortunately, this is not the only home Bible study that has been attacked in recent months.

Over in southern California, Chuck and Stephanie Fromm were fined $300 for holding a home Bible study on their property.  They were told that they did not have the proper “conditional use permit” to hold such a meeting.

And this is the direction that our country is heading in today.  Instead of protecting our freedoms and liberties, the “authorities” tell us that we have to get “permission” from the government to do just about anything.

Down in Phoenix, Arizona one man was actually sentenced to 60 days in prison and he was fined $12,180 for holding a Bible study on his property.

In that case he would have several dozen people over to his home for the meetings and he did have a “church sign” in his front yard, but instead of trying to work things out the authorities threw the full force of the law at him.

So if we can’t meet in our own homes, where are we supposed to go?

Should we rent a school building?

That is what many Christian groups around the country do, but now authorities in many areas are starting to crack down on that.

For example, WND reported earlier this year that New York City was trying to cancel the leases of all religious groups that were renting space in public school buildings….

Sadly, this is all part of a pattern of hostility toward Christianity that is steadily building in this country.

A recently released report entitled “The Survey of Religious Hostility in America” contained a whole host of incidents that demonstrate this very clearly.  The following are just a few examples from the 140 page report….

Perhaps you are not a Christian and you are glad that authorities are making things tough on the Christians.

Well, what about when they come and knock on your door and trample on your rights?

For example, in some areas of the country it is now apparently “wrong” for kids to play in their own yard unsupervised.  The following is from a recent Natural News article….

A Virginia mother was recently interrogated four times by police, and visited twice by social services, after neighbors spotted the mother’s children playing in their own yard unsupervised, and decided to report the non-incident to local authorities. According to Lenore Skenazy of Free-Range Kids, such hysteria and Stasi-style paranoia are becoming the norm in America, where children are being excessively coddled, overprotected, and treated as though they are always in grave danger of being kidnapped or harmed.

Can you see where all of this is headed?

We live in a nation run by control freaks.

We live in a nation where 51 percent of the people agree with this statement: “it is necessary to give up some civil liberties in order to make the country safe from terrorism.”

We live in a nation where people have become convinced that it is normal for security goons to touch the private parts of our women and our children before they are allowed to board their flights.

We live in a nation where the government is installing a nationwide network of very sophisticated facial recognition cameras to watch what we are all doing.

If we continue to allow our liberties and freedoms to be eroded at this pace, eventually we will have nothing left.

Someday our children may wake up in a dystopian nightmare far beyond anything that George Orwell ever dreamed of.

And who will be to blame?

We will be, because we never stood up and said something while we had the chance.