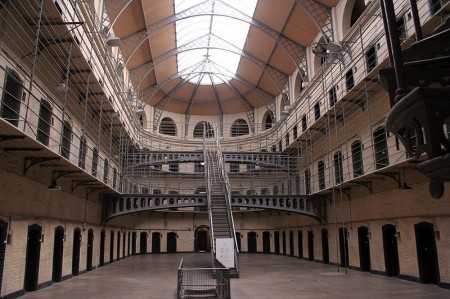 “You are being watched.  The government has a secret system – a machine – that spies on you every hour of every day.”  That is how each episode of “Person of Interest” on CBS begins.  Most Americans that have watched the show just assume that such a surveillance network is completely fictional and that the government would never watch us like that.  Sadly, most Americans are wrong.  Shocking new details have emerged this week which prove that a creepy nationwide network of spy cameras is being rolled out across the United States.  Reportedly, these new spy cameras are “more accurate than modern facial recognition technology”, and every few seconds they send back data from cities and major landmarks all over the United States to a centralized processing center where it is analyzed.  The authorities believe that the world has become such a dangerous place that the only way to keep us all safe is to watch what everyone does all the time.  But the truth is that instead of “saving America”, all of these repressive surveillance technologies are slowly killing our liberties and our freedoms.  America is being transformed into an Orwellian prison camp right in front of our eyes, and very few people are even objecting to it.

This week, New York City officials proudly announced the rollout of their new high tech surveillance system.  A vast network of spy cameras, license plate readers and databases will make it virtually impossible to do anything in public in New York City without the police knowing about it.

The following is from a New York Daily News article about this new system….

The NYPD is starting to look like a flashy, forensic crime TV show thanks to a new super computer system unveiled Wednesday near Wall St.

“We’re not your mom and pop police department anymore,” Mayor Bloomberg crowed. “We are in the next century. We are leading the pack.”

Most Americans may read this and think that they do not have anything to worry about since they do not live in New York City.

Well, if you are thinking that right now you would be dead wrong.

As mentioned earlier, a new nationwide network of spy cameras is being rolled out all across the United States.  This surveillance grid is reportedly going to cover every major U.S. city and every major “high value target” in the country.

An RT article that was published on Friday revealed some absolutely shocking details about this new program….

Former senior intelligence officials have created a detailed surveillance system more accurate than modern facial recognition technology — and have installed it across the US under the radar of most Americans, according to emails hacked by Anonymous.

Every few seconds, data picked up at surveillance points in major cities and landmarks across the United States are recorded digitally on the spot, then encrypted and instantaneously delivered to a fortified central database center at an undisclosed location to be aggregated with other intelligence. It’s part of a program called TrapWire and it’s the brainchild of the Abraxas, a Northern Virginia company staffed with elite from America’s intelligence community. The employee roster at Arbaxas reads like a who’s who of agents once with the Pentagon, CIA and other government entities according to their public LinkedIn profiles, and the corporation’s ties are assumed to go deeper than even documented.

Most of the people involved in implementing this kind of technology honestly believe that what they are doing is good for America.

They believe that it will help prevent terrorist attacks and make America a safer place.

But what kind of country will this be once the government is looking over our shoulders 24 hours a day?

According to RT, this new surveillance system is already operating in major cities from coast to coast….

Since its inception, TrapWire has been implemented in most major American cities at selected high value targets (HVTs) and has appeared abroad as well. The iWatch monitoring system adopted by the Los Angeles Police Department (pdf) works in conjunction with TrapWire, as does the District of Columbia and the “See Something, Say Something” program conducted by law enforcement in New York City, which had 500 surveillance cameras linked to the system in 2010. Private properties including Las Vegas, Nevada casinos have subscribed to the system. The State of Texas reportedly spent half a million dollars with an additional annual licensing fee of $150,000 to employ TrapWire, and the Pentagon and other military facilities have allegedly signed on as well.

Do we really want to give up all of our privacy just so that we can feel a little bit safer?

The truth is that no surveillance system on earth could possibly keep us 100% safe.  Bad things are always going to happen, and no amount of surveillance is going to prevent that.

More surveillance may make it easier to catch the people who do those bad things, but do we really want to give up all of our privacy for that?

Sadly, in recent years a whole bunch of polls and surveys have found that a majority of Americans are willing to sacrifice liberty for more security.

Perhaps that is why more Americans are not objecting to the horrible abuse that is happening at U.S. airports.

Americans have been trained to believe that turning our country into a high tech security state is a good thing and so most of them are just going along with it.

We live at a time when paranoia is running rampant.  The government has even created an iPhone app that is designed to encourage us all to take photos of “suspicious activity” and report our neighbors to the Feds.

When I was growing up, totalitarian regimes such as North Korea were portrayed as the “bad guys”, but now we are becoming more like them every single day.

And this is not just happening on the federal level.

Police on the local level are also acting like totalitarian thugs as well.

Recently, a woman down in Florida was pulled over by a police car for rolling through a stop sign.  What happened next is something out of a horror movie….

The cop then placed Tarantino in the back of the squad car, where she allegedly sat for two hours. When backup arrived, Tarantino was strip searched on the side of the road, where passing motorists could see everything.

Then, in a gruesome twist, a female officer “forcibly removed” a tampon from Tarantino.

Are we still living in America?

What in the world are we becoming?

After 9/11, we were told that the terrorists were overseas and that we needed to create a “Department of Homeland Security” to protect us all from them.

Well, now we are finding out that “extremist domestic organizations” are as much of a “threat” as terrorists from overseas are.

The following is from an article posted on the Homeland Security News Wire….

The FBI and other government law-enforcement agencies have been convinced for a while that terrorism from extremist domestic organizations is just as dangerous as terrorism from foreign organizations, but efforts by authorities to detect and pre-empt violent extremists have faced serious legal and political hurdles, including free speech guarantees and pushback from political lobbies suspicious of the government’s motives

In America today, literally everyone is a potential terrorist.

That means that you must be watched.

That means that you must be spied on every hour of every day.

Welcome to the new Amerika.  I hope that you will enjoy your Orwellian prison camp.