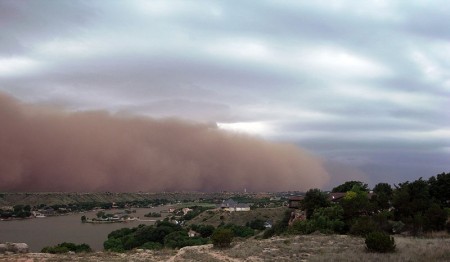 What would you do if a 15 hour dust storm with winds up to 60 miles an hour hit your home and afterwards there were three foot drifts of dirt covering everything that you owned?  As crazy as that sounds, that is exactly what is now happening in some areas of the western United States.  Three years of severe drought has turned the soil of much of the western United States into a fine powder that the wind can easily pick up.  As a result, we are seeing “apocalyptic” dust storms unlike anything the region has seen since the days of the Dust Bowl of the 1930s.  Farmers and ranchers are literally watching their valuable topsoil being blown away by the wind and there is not a whole lot that they can do about it.  So what is going to happen if the drought continues?  As I mentioned in a previous article, according to scientists the 20th century was the wettest century in the western half of the United States in 1000 years.  Unfortunately, they are also telling us that things are reverting back to more “normal” historical patterns, and that is very bad news for farmers and ranchers.  So are we heading toward a full-blown replay of the Dust Bowl days?  Or could the coming years actually end up being worse than the Dust Bowl?  Those are very sobering questions to consider.

For Jillane Hixson and her husband Dave Tzilkowski, the huge financial loss to their land, Hixson Farm four miles south of Lamar, caused by the 60mph hurling ‘dust devil’ has left them ‘shellshocked’ and depressed’.

The couple were trapped in their home for about 15 hours from May 24 as the punishing storm rolled around them.

‘You hear sand and dirt pounding against the window,’ Hixson told The Denver Post.

‘You know that it’s your crop that’s hitting the windows and blowing away, and it’s not just affecting you, but also everyone else.

‘You can’t stand to look at it. It’s like a train wreck, looking a disaster full in the face.

‘At one point, the sand was pounding on the glass so hard, I didn’t know if it was hail or dirt.

As the fog of dirt seeped through cracks in the house, the couple was forced to cover their faces with handkerchiefs.

‘It was in your nose, on your tongue, in your eyes,’ Hixson said.

They went to bed at 11 p.m, putting their heads under the blankets to shield them from the noise and the dirt.

The storm had passed by the next morning, but three-foot drifts of dirt covered everything.

Sadly, a storm like that is no longer considered to be an anomaly in the western United States.

In fact, on Tuesday USA Today had a front page story about an “apocalyptic” dust storm that caused a 27 vehicle pileup on one road in rural Nevada…

Twenty-seven vehicles slammed into each other during a sandstorm in rural Northern Nevada, killing one person, seriously injuring several others and sapping already-thin emergency resources Monday evening, officials said.

Humboldt County sheriff’s dispatchers called in virtually every medical, law enforcement and fire worker in the sparsely populated area after drivers reported “near-apocalyptic” conditions on Interstate 80 three miles west of Winnemucca, according to officials at the Humboldt General Hospital.

The amount of dust being blown across the landscape has increased over the last 17 years in large swaths of the West, according to a new study led by the University of Colorado Boulder. The escalation in dust emissions — which may be due to the interplay of several factors, including increased windstorm frequency, drought cycles and changing land-use patterns — has implications both for the areas where the dust is first picked up by the winds and for the places where the dust is put back down.

So what is causing this to happen?

Well, basically drought is the big problem.  Not enough rain is falling, underground aquifers are being depleted and important bodies of water such as the Colorado River are drying up.

The western United States is become a very dry place and is rapidly approaching a major water emergency.

Posted below are some more facts about the coming water shortage in the United States.  These facts come from one of my previous articles entitled “30 Facts About The Coming Water Crisis That Will Change The Lives Of Every Person On The Planet“…

1. The Ogallala Aquifer is being drained at a rate of approximately 800 gallons per minute.

2. According to the U.S. Geological Survey, “a volume equivalent to two-thirds of the water in Lake Erie” has been permanently drained from the Ogallala Aquifer since 1940.

3. Decades ago, the Ogallala Aquifer had an average depth of approximately 240 feet but today the average depth is just 80 feet. In some areas of Texas, the water is gone completely.

4. Scientists are warning that nothing can be done to stop the depletion of the Ogallala Aquifer. The ominous words of David Brauer of the Ogallala Research Service should alarm us all…

“Our goal now is to engineer a soft landing. That’s all we can do.”

5. According to a recent National Geographic article, the average depletion rate of the Ogallala Aquifer is picking up speed…

Even more worrisome, the draining of the High Plains water account has picked up speed. The average annual depletion rate between 2000 and 2007 was more than twice that during the previous fifty years. The depletion is most severe in the southern portion of the aquifer, especially in Texas, where the water table beneath sizeable areas has dropped 100-150 feet; in smaller pockets, it has dropped more than 150 feet.

6. According to the U.S. National Academy of Sciences, the U.S. interior west is now the driest that it has been in 500 years.

7. Wildfires have burned millions of acres of vegetation in the central part of the United States in recent years. For example, wildfires burned an astounding 3.6 million acres in the state of Texas alone during 2011. This helps set the stage for huge dust storms in the future.

8. Unfortunately, scientists tell us that it would be normal for extremely dry conditions to persist in parts of western North America for decades. The following is from an article in the Vancouver Sun…

But University of Regina paleoclimatologist Jeannine-Marie St. Jacques says that decade-long drought is nowhere near as bad as it can get.

St. Jacques and her colleagues have been studying tree ring data and, at the American Association for the Advancement of Science conference in Vancouver over the weekend, she explained the reality of droughts.

“What we’re seeing in the climate records is these megadroughts, and they don’t last a decade—they last 20 years, 30 years, maybe 60 years, and they’ll be semi-continental in expanse,” she told the Regina Leader-Post by phone from Vancouver.

9. Experts tell us that U.S. water bills are likely to soar in the coming years. It is being projected that repairing and expanding our decaying drinking water infrastructure will cost more than one trillion dollars over the next 25 years, and as a result our water bills will likely approximately triple over that time period.

10. Right now, the United States uses approximately 148 trillion gallons of fresh water a year, and there is no way that is sustainable in the long run.

12. Lake Mead supplies about 85 percent of the water to Las Vegas, and since 1998 the level of water in Lake Mead has dropped by about 5.6 trillion gallons.

13. It has been estimated that the state of California only has a 20 year supply of fresh water left.

14. It has been estimated that the state of New Mexico only has a 10 year supply of fresh water left.

So what happens when there is not enough fresh water to support our rapidly growing cities in the western half of the country?

Today, Lake Mead supplies approximately 85 percent of the water that Las Vegas uses, and it provides electricity for tens of millions of Americans (including much of southern California).  But Lake Mead is drying up.  Since 1998 the water level in Lake Mead has dropped by about 5.6 trillion gallons, and when Lake Mead falls below 1,050 feet the turbines of the Hoover Dam start to shut down.

So what is everyone going to do once the water is gone?

Big changes are happening folks.  It looks like Dust Bowl conditions are returning with a vengeance, and this is going to be much, much more than just a minor inconvenience.