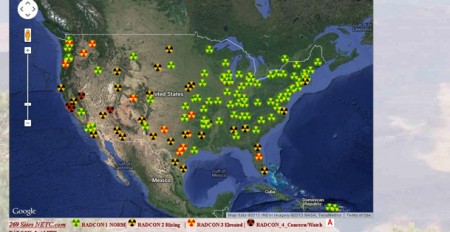 According to an absolutely shocking study that has just been released, one area of the Pacific Ocean floor was 98 percent covered by decomposing sea creatures in July 2012.  But in March 2012, only 1 percent of that same section of the Pacific Ocean floor was covered by dead sea creatures.  This study has been going on for 24 years, and the scientists that are running this study say that during “the past 2 years” they have seen “the biggest amounts of this detritus by far”.  In other words, the scientists that are studying this section of the ocean floor have never seen anything quite like this before.  And when you consider this in conjunction with all of the other reports that have been coming in of sea creatures dying all over the Pacific Ocean, it is only natural to start asking some hard questions.  Could radiation from Fukushima be responsible for all of this death?

National Geographic recently published a very interesting article about this study of the Pacific Ocean floor.  The scientists running the study cannot really explain the very strange changes that they have observed since 2011…

In March 2012, less than one percent of the seafloor beneath Station M was covered in dead sea salps. By July 1, more than 98 percent of it was covered in the decomposing organisms, according to the study, published this week in the Proceedings of the National Academy of Sciences.

The major increase in activity of deep-sea life in 2011 and 2012 weren’t limited to Station M, though: Other ocean-research stations reported similar data.

Although climate change is a leading contender for explaining the major increases in 2011 and 2012, Huffard says that these spikes could be part of a longer-term trend that scientists haven’t yet observed.

Even though they do not have a “scientific explanation” for what is happening, the scientists are admitting that they have never seen a die-off of this magnitude in the 24 years that this study has been going on…

“In the 24 years of this study, the past 2 years have been the biggest amounts of this detritus by far,”  said study leader Christine Huffard, a marine biologist at the Monterey Bay Aquarium Research Institute in California.

Could this phenomenon possibly be related to what has been going on at Fukushima?

It should be a fair question to ask.  Especially in light of all of the other sea creature deaths that have been happening all over the Pacific.  The following is a short excerpt from a recent CNN article…

“One of my favorite sayings right now is we may be experiencing global weirding,” Jim Covel at the Monterey Bay Aquarium said.

The Pacific recently has seen its fair share of weird. Last year, there was an invasion of Humboldt squid around coastal California and sea lion dying off in worrying numbers. And in recent weeks, disturbingly, sea stars – from Alaska to San Diego are wasting away, literally melting.

So what in the world would cause sea stars to begin “literally melting”?

Once again, scientists do not have an answer.

But clearly, something definitely appears to be significantly affecting life throughout the Pacific Ocean.  In fact, one very experienced Australian adventurer has stated that he felt as though “the ocean itself was dead” as he journeyed from Japan to San Francisco recently…

Shouldn’t someone out there be trying to put all of the pieces together and asking if Fukushima could somehow be responsible for all of this?

For much more on the epidemic of death that we have been witnessing in the Pacific Ocean lately, please check out some of my previous articles about Fukushima…

-“Something Is Killing Life All Over The Pacific Ocean – Could It Be Fukushima?”

-“What Is Happening To Alaska? Is Fukushima Responsible For The Mass Animal Deaths?”

And this is a crisis that is not going away any time soon.  In fact, it just keeps getting worse.  The Japanese government has estimated that approximately 300 tons of highly radioactive water is pouring into the Pacific Ocean from the destroyed Fukushima nuclear facility every single day, and according to a recent RT article, outdoor radiation levels at Fukushima recently hit a new all-time high…

Outdoor radiation levels have reached their highest at Japan’s Fukushima nuclear plant, warns the operator company.  Radiation found in an area near a steel pipe that connects reactor buildings could kill an exposed person in 20 minutes, local media reported.

So the total amount of radioactive material that has been released into the Pacific Ocean is constantly going up, and considering the fact that some of these radioactive particles have a half-life of about 30 years, all of this nuclear material is going to be sitting in the Pacific for a very, very long time.

And guess what?  Even more highly radioactive water may soon be released into the Pacific Ocean.  The Japanese are running out of places to store the radioactive water that they have been able to capture, and the IAEA is actually recommending that the “storage problem” should be solved by dumping the water into the ocean…

In an attempt to solve the storage problem the International Atomic Energy Agency (IAEA) proposed on Wednesday to consider dumping toxic water into the ocean after lowering the level of radioactive materials.

It is almost as if they consider the Pacific Ocean to be a giant trash dumpster.

And the mainstream media has been greatly misleading the public as to the true nature of the disaster at Fukushima.

According to nuclear expert Mycle Schneider, the lead author of the World Nuclear Industry status reports, the rest of the world should be very alarmed by what is happening…

“It is much worse than we have been led to believe, much worse.”

But the mainstream media in the United States really doesn’t talk much about Fukushima anymore.

They seem to believe that it isn’t a crisis worth talking about anymore.

Meanwhile, dangerous radiation levels are being measured all over the country.

NETC, an independent organization that collects and monitors radiation data from locations all over America, recently issued an alert for Austin, Texas and Grand Junction, Colorado…

RADCON 5 Alerts have been reported in both Austin, Texas as well as Grand Junction, Colorado as shared in the screenshots below from the Nuclear Emergency Tracking Center – NETC. Radiation levels are also way above normal background levels in St. George, Utah and Augusta, Georgia.

Over the past couple of years, radiation levels have been abnormally high in the U.S. – especially in the western half of the country.

So why isn’t the mainstream media talking about this?

And is all of this something that we should be deeply concerned about?