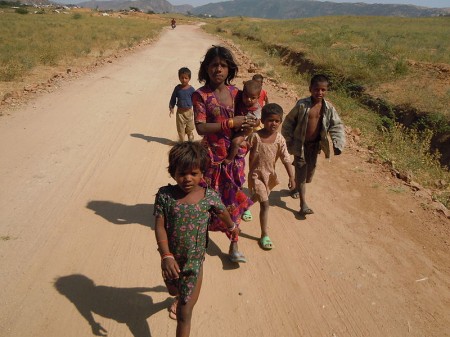 For six of the last eleven years the world has consumed more food than it has produced.  This year, drought in the United States and elsewhere has put even more pressure on global food supplies than usual.  As a result, global food reserves have reached their lowest level in almost 40 years.  Experts are warning that if next summer is similar to this summer that it could be enough to trigger a major global food crisis.  At this point, the world is literally living from one year to the next.  There is simply not much of a buffer left.  In the western world, the first place where we are going to notice the impact of this crisis is in the price of food.  It is being projected that overall food prices will rise between 5 and 20 percent by the end of this year.  It is becoming increasingly clear that the world has reached a tipping point.  We aren’t producing enough food for everyone anymore, and food reserves will continue to get lower and lower.  Eventually they will be totally gone.

The United Nations has issued an unprecedented warning about the state of global food supplies.  According to the UN, global food reserves have not been this low since 1974…

World grain reserves are so dangerously low that severe weather in the United States or other food-exporting countries could trigger a major hunger crisis next year, the United Nations has warned.

Failing harvests in the US, Ukraine and other countries this year have eroded reserves to their lowest level since 1974. The US, which has experienced record heatwaves and droughts in 2012, now holds in reserve a historically low 6.5% of the maize that it expects to consume in the next year, says the UN.

“We’ve not been producing as much as we are consuming. That is why stocks are being run down. Supplies are now very tight across the world and reserves are at a very low level, leaving no room for unexpected events next year,” said Abdolreza Abbassian, a senior economist with the UN Food and Agriculture Organisation (FAO).

But the population of the globe is much larger than it was back in 1974.  So needless to say, we have a major league problem on our hands.

The United States exports more food than anyone else in the world, and so the devastating drought that the U.S. experienced this summer is putting a lot of stress on the entire global food system.

According to Reuters, the drought hit U.S. ranchers particularly hard.  Many of them had to kill off large portions of their herds because they couldn’t afford to feed them any longer.  So there was a short-term surge in the supply of meat, but because herds are smaller now in the long-term the supply of meat is going to become much tighter.  So expect meat prices to start to go up significantly…

The worst drought to hit U.S. cropland in more than half a century could soon leave Americans reaching deeper into their pockets to fund a luxury that people in few other countries enjoy: affordable meat.

Drought-decimated fields have pushed grain prices sky high, and the rising feed costs have prompted some livestock producers to liquidate their herds. This is expected to shrink the long-term U.S. supply of meat and force up prices at the meat counter.

The price of corn — a key component in livestock feed and an ingredient in powdered sugar, salad dressing, soda and more — catapulted 60% in early summer. A British trade group recently predicted “a world shortage of pork and bacon next year,” which most analysts interpreted to mean that higher prices are ahead.

In the meantime, chickens and turkeys are getting more expensive just in time for the holidays. Already, chicken prices are up 5.3% from a year earlier, while the cost of turkey and other poultry is up 6.9%. Eggs cost 18% more in September than they did a year earlier.

Sadly, the truth is that food prices have already been steadily rising in the United States in recent years.  We have come to accept this as “normal”, but these horrible price increases are really squeezing the budgets of middle class families and we certainly don’t need food prices to start going up even faster.

One man recently came came across a grocery receipt that was eight years old.  When he compared those prices to what he is paying now he was absolutely stunned…

Many prices had doubled on him in just eight years.

Now that food prices are projected to start rising even more rapidly, how soon will it be until food prices double again?

Many Americans will be shocked by rising food prices, but at least for now we won’t have to deal with actual food shortages like many on the other side of the globe will be soon.

At the end of August, the World Bank issued a global hunger warning…

“Food prices rose again sharply threatening the health and well-being of millions of people,” said World Bank group president, Jim Yong Kim. “Africa and the Middle East are particularly vulnerable, but so are people in other countries where the prices of grains have gone up abruptly.”

The bank said food prices overall rose by 10% between June and July to leave them 6% up on a year earlier. “We cannot allow these historic price hikes to turn into a lifetime of perils as families take their children out of school and eat less nutritious food to compensate for the high prices,” said Kim.

The price of food can mean the difference between life and death in some of the poorest areas of Africa.  What some African families face on a daily basis would be absolutely unimaginable to many of us in the western world.  The following example is from a recent article in the Guardian…

On the other side of the world, Mary Banda, who lives in Mphaka village near Nambuma in Malawi, has had a year during which she has barely been able to feed her children, one of whom has just gone to hospital with malnutrition.

Government health worker Patrick Kamzitu says: “We are seeing more hunger among children. The price of maize has doubled in the last year. Families used to have one or two meals a day; now they are finding it hard to have one.”

How would you feel if you only got one meal per day?

In many parts of India and in many parts of Africa more than 40 percent of all children have stunted growth due to malnutrition and a lack of clean water.

So if your family has enough to eat and drink every day you should be thankful for your blessings.

What makes things even worse is that the big banks have turned betting on the price of food into a giant casino game.

Many are making huge amounts of money through commodity speculation, but by driving up prices they are severely hurting millions of families on the other side of the planet.  The following is from a recent article by Heather Stewart…

The Institute of International Finance has estimated that by the middle of last year, $450bn of financial assets was invested in commodities – or derivatives, betting on future price movements.

In principle, there would be nothing wrong with financiers moving into the food market if it directed billions of dollars of investment towards expanding production, bringing new land into cultivation and developing new technologies to boost yields.

But – as the thoroughly mad market for mortgage-backed securities in the run-up to the credit crisis, and the resulting building boom across the US, illustrated very clearly – the price signals emerging from the stampeding herds of Wall street can be deeply misleading.

In a recent paper, provocatively titled “Don’t Blame the Physical Markets,” the UN’s trade and development arm, Unctad, argued that the wall of money flooding into commodities has badly distorted the price signals a well-functioning market should send to producers and consumers.

The era of seemingly endless cheap food has come to an end.  In future years, there simply will not be enough food for everyone on the globe.  Some people are going to go hungry.  That is one reason why I am encouraging everyone to start preparing for the coming global food crisis.

Some experts are projecting the worst for the years ahead…

Let us certainly hope for the best, but let us also prepare as if the absolute worst is headed our way.

I am busy preparing.