The Obama administration would have us believe that there will be “lasting peace” in the Middle East if Israel will just agree to a two-state solution based on pre-1967 borders.  Once there is a Palestinian state with East Jerusalem as the capital, Obama insists that the threat of war will be over.  But is that actually true?  Of course not.  As you will see below, the people that Israel is “negotiating” with are taught from a very early age to hate the Jewish people and that every Muslim is called by Allah to work toward the total elimination of the nation of Israel.  If a temporary “peace agreement” will allow them to partially reach that goal, then that is acceptable.  In Islam, there is a long history of using temporary treaties to advance the cause of jihad that goes all the way back to Muhammed himself.  And there is a doctrine in Islam known as “Tawriya” that allows a Muslim to lie to others as long as he is able “to articulate his deceit in a way that is true to him“.  As far as Hamas, Hezbollah and the leadership of the Palestinian Authority are concerned, their ultimate goal has never changed.  In fact, a senior Palestinian Authority official recently stated during a Syrian television program that a treaty with Israel will just be one step toward destroying Israel in stages…

In response to concern expressed by the interviewer that any US-imposed deal would be “deficient”, insofar as it would “only” require Israel to cede Judea and Samaria, a smiling Zaki urges calm.

“You can relax. We find ourselves united for the first time. Even the most extreme among us, Hamas, or the fighting forces, want a state within the ’67 borders [sic]. Afterward, we [will] have something to say, because the inspiring idea cannot be achieved all at once. [Rather] in stages,” he responded.

You can watch video of those comments being made right here…

One of the parties that Israel must come to agreement with for any “peace treaty” to work is Hamas, which governs the Gaza Strip.  The founding document of Hamas is exceedingly clear about what the purpose of that organization is.  The following are just a few quotes from the Hamas Charter…

-“Israel will exist and will continue to exist until Islam will obliterate it, just as it obliterated others before it.”

-“The land of Palestine is an Islamic Waqf [Holy Possession] consecrated for future Muslim generations until Judgment Day. No one can renounce it or any part, or abandon it or any part of it.”

-“The time will not come until Muslims will fight the Jews [and kill them]; until the Jews hide behind rocks and trees, which will cry: Oh Muslim! There is a Jew hiding behind me, come on and kill him!”

Is Hamas going to change their Charter before they agree to a treaty with Israel?

Of course not, because the ultimate goals of Hamas have not changed.

When Ariel Sharon recently died, the true feelings of the Palestinian people came out once again just like they did during the aftermath of 9/11.  According to one recent news report, even Palestinian children were greatly celebrating the death of Sharon…

“Palestinian children hold weapons, celebrate, and chant slogans against Israel after hearing of the death of Ariel Sharon, the hard-charging Israeli general and prime minister.”

Of course this should be no surprise to those of us that are aware of how those children are educated.  They are taught to hate Jewish people from birth, and their school textbooks are full of anti-Jewish propaganda.  For example, according to the Daily Mail one textbook for 9th grade Palestinian students actually contains the following statement…

“The hour (of judgment) will not come until the Muslims fight the Jews and kill them. There is a Jew behind me come and kill him.”

And of course there are many more quotes like that in Palestinian textbooks.  The following is an excerpt from a report entitled “From Nationalist Battle to Religious Conflict: New 12th Grade Palestinian Textbooks Present a World Without Israel“…

The teachings repeatedly reject Israel’s right to exist, present the conflict as a religious battle for Islam, teach Israel’s founding as imperialism, and actively portray a picture of the Middle East, both verbally and visually, in which Israel does not exist at all. The following description of Israel’s founding represents the dominant dogma about Israel in Palestinian schoolbooks: Defining Israel’s founding as a “catastrophe unprecedented in history,” “a theft perpetrated by “Zionist gangs,” together with numerous other hateful descriptions of Israel as “colonial imperialist” and “racist”, compounded by the presentation of the conflict as a religious war, leaves no latitude for students to have positive or even neutral attitudes towards Israel. This negative imagery and religious packaging are compounded by hateful presentations of Israeli policy. The young students are imbued with a Palestinian identity as “victims” just by virtue of Israel’s existence. The well-meaning student is left with no logical justification or religious option to accept Israel as a neighbor or to seek coexistence. Given the total rejection of Israel’s right to exist, on nationalistic and religious grounds, Palestinian terror against Israel since Israel’s founding in 1948 is defined as: “resistance … acts of most glorious heroism.” PA educators teach that fighting Israel is not merely a territorial conflict, but also a religious battle for Islam. The schoolbooks define the conflict with Israel as “Ribat for Allah” – “one of the actions related to Jihad for Allah, and it means: Being found in areas where there is a struggle between Muslims and their enemies”.

In much of the Islamic world, Islam is not just a religion.  It is a political, economic, social and religious system which is all-encompassing.

And for Palestinians, being anti-Israel is at the very core of that system.  Just check out what kindergarten children at one particular Palestinian school are being taught…

Children attending a kindergarten in Gaza that is run by Islamic Jihad celebrated their graduation by dressing up in army attire, waving toy rifles and chanting anti-Israel slogans.

“It is our obligation to educate the children to love the resistance, Palestine and Jerusalem, so they will recognize the importance of Palestine and who its enemy is,” the kindergarten’s director said.

The children were dressed up in uniforms of Jihad’s armed-wing, the al-Quds Brigades, and each of them received a toy rifle. Some of them held up photos of Islamic Jihad founder Fathi Shaqaqi.

You can see some extremely disturbing photographs of this kindergarten graduation event right here.

The truth is that you are never going to have lasting peace until both sides truly want peace.

And it should be abundantly clear that the Palestinians do not want peace.  Just check out some of the results from one survey in which Palestinians were asked about their beliefs about Israel and the peace process…

-60 percent were in favor of direct negotiations with Israel that would result in a “two state” solution.

-Approximately two-thirds of the respondents agreed that “over time, Palestinians must work to get back all the land for a Palestinian state.”

-Only 23 percent of the respondents believed that  “Israel has a permanent right to exist as a homeland for the Jewish people.”

-58 percent of those surveyed preferred “armed struggle” over “engagement with Israel.”

-Just 12 percent of the respondents said that official maps, documents and school textbooks should show the name “Israel”.

So you can see, most Palestinians are actually in favor of a “two state solution”.

How in the world can you ever have “lasting peace” in that type of an environment?

This type of thinking is regularly demonstrated in other areas of the Middle East as well.  For instance, a top Iranian official recently stated that a nuclear bomb “is necessary to put down Israel”…

Iran would be able to build a nuclear bomb in “two weeks” if it gets “access to 270 kilograms of 20 percent [enriched uranium], 10 tons of 5 percent, and 20 thousand centrifuges,” Nabavian stated, according to Iranian media reports. “We are not looking for a nuclear bomb, but having a nuclear bomb is necessary to put down Israel.”

And if you want to see something incredibly chilling, watch the video that I have posted below.  It is of a massive public rally for Muhammed Mursi when he was running for president of Egypt.  Most Americans never get to see videos like this one.  The obsession that these jihadists have for exterminating the state of Israel is very apparent in this video…

Right now, Israel is the most hated nation on the entire planet.  Hundreds of millions of Muslims are absolutely convinced that the nation of Israel will eventually be eradicated.

When Israel signs a treaty that exchanges land for peace, it will be hailed as a great diplomatic achievement in the western world.

But the truth is that all that it will really do is set the stage for the next great war in the Middle East.

Sadly, most of those living in the western world do not understand this.  They simply do not understand that the ultimate goal of jihad is to bring the entire planet into submission.  Muslims are taught this from a very early age.  They want “world peace”, but their definition of world peace is when everyone in the world will finally be brought into the House of Islam.

And yes, “everyone” includes you too.

So if you are wishing for “peace” in the Middle East, perhaps you need to carefully define what you are talking about.

Yes, a “major treaty” will probably be agreed to in the Middle East later this year.

But it will solve absolutely nothing.  Instead, it will just create even more problems. 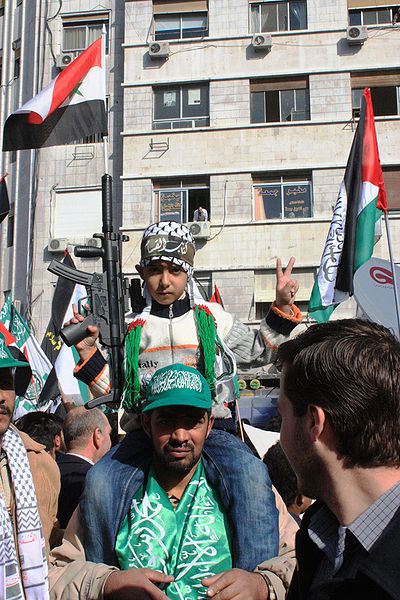