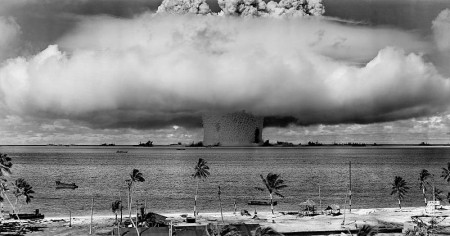 Did you know that Russia is building submarines that are so quiet that the U.S. military cannot detect them?  These “black hole” submarines can freely approach the coastlines of the United States without fear of being detected whenever they want.  In fact, a “nuclear-powered attack submarine armed with long-range cruise missiles” sailed around in the Gulf of Mexico for several weeks without being detected back in 2012.  And now Russia is launching a new class of subs that have “advanced stealth technology”.  The U.S. Navy openly acknowledges that they cannot track these subs when they are submerged.  That means that the Russians are able to sail right up to our coastlines and launch nukes whenever they want.  But instead of trying to find a way to counteract this potential threat, the Obama administration has been working very hard to dismantle the U.S. strategic nuclear arsenal.  In the end, we could potentially pay a great price for this utter foolishness.

A recent RT article discussed these new super silent “black hole” submarines.  To say that they are impressive would be a massive understatement…

Russia has launched its new state-of-the-art Novorossiysk submarine, which set sail from a St Petersburg shipyard to become the first of six diesel-electric stealth subs delivered to the Russian Black Sea fleet in the next two years.

The Novorossiysk belongs to the Varshavyanka-class (Project 636), which is characterized by advanced stealth technology, making it virtually undetectable when submerged.

“Our potential opponents call it the ‘Black Hole’ due to the very low noise emission and visibility of the submarine,” Konstantin Tabachny, captain of the Novorossiysk, told Channel One TV. “To be undetectable is the main quality for a submarine. And this whole project really fits its purpose.”

Of course Russia has been building “near silent” submarines for quite some time.  In fact, their nuclear submarines are already far quieter than anything the U.S. currently has…

The Borey Class submarine, dubbed Vladimir Monomakh, has a next generation nuclear reactor, can dive deeper than 1,200 feet, and carries up to 20 nuclear intercontinental ballistic missiles (ICBM).

Each of these “Bulava” ICBM’s can carry ten detachable MIRV warheads, what they call “re-entry vehicles,” capable of delivering 150 kiloton yields per warhead

And as I mentioned above, these submarines have the ability to approach the coastlines of the United States without the U.S. military ever even knowing that they were there.

In addition, Russia has been working feverishly to upgrade other elements of their strategic arsenal as well.  For example, it was recently announced that Russia will soon begin work on a new strategic bomber…

Russia will begin the full-scale R&D work on its future strategic bomber in 2014, a senior aircraft-manufacturing industry official said Thursday.

The project, known as PAK-DA (an acronym meaning “future long-range aircraft”), has been in the works for several years but was given the formal go-ahead by the Russian leadership last year.

Russia is developing several new missiles, including a weapon U.S. intelligence agencies have assessed as a covert intermediate-range nuclear missile called the RS-26 that is being developed and tested in apparent violation of the 1987 Intermediate-range Nuclear Forces Treaty.

The Russian government has denied the RS-26 violates the INF treaty and claims it is a new ICBM, which some arms compliance experts say is a violation of the 2010 New START treaty.

Sadly, most Americans have no idea that any of this is going on.

Most Americans just assume that “the Cold War is over” and that Russia will never be a threat to us ever again.

If only that was actually true.

Today, Russia is stronger both economically and militarily than it has ever been before.

And as you just read about, Russia is rapidly preparing for a potential future conflict with the United States.

If the Cold War truly is over, then why does Russia have more spies inside the U.S. today than it did at any point during the Cold War?

The American people need to wake up.

As all of this has been going on, Barack Obama has been working relentlessly to dismantle the U.S. strategic nuclear arsenal.  The following is an excerpt from one of my previous articles…

Since that time, the U.S. strategic nuclear arsenal has been reduced by about 95 percent.

The START Treaty that Obama agreed to back in 2010 will limit both the United States and Russia to a maximum of 1,550 deployed strategic nuclear warheads.

But that is not nearly enough of a reduction for Obama.

Back in June, he declared that “after a comprehensive review” he has decided that the United States can reduce the number of our deployed nuclear warheads by another one-third…

After a comprehensive review, I’ve determined that we can ensure the security of America and our allies, and maintain a strong and credible strategic deterrent, while reducing our deployed strategic nuclear weapons by up to one-third.  And I intend to seek negotiated cuts with Russia to move beyond Cold War nuclear postures.

That would leave us with around 1,000 warheads.

And thanks to the various treaties that we have signed, Russia will know where most of those warheads are located.

So this makes a scenario in which Russia and China collectively conduct a first strike against the United States much more conceivable.  If Russia or China knows exactly where our warheads are, it would be very easy to take most of them out in less than 10 minutes with a submarine-based first strike.

The fact that Russia is building subs that are so quiet that the U.S. Navy cannot even detect them is a very, very big deal.

It means that at any time the Russians could have their subs pop up right off of our coastlines and deliver an absolutely crippling first strike that would hit us before we would have any chance of responding.

No, I do not believe that such a thing will happen this year, or next year or the year after that.

But as relations between the United States and Russia continue to go downhill, the stage is being set for such a scenario to happen in the future.

World War III is coming at some point, and the decisions that are being made right now are making it far more likely that the United States will be the loser of that conflict.