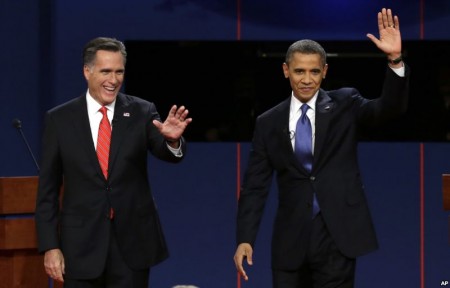 This is proving to be one of the tightest presidential elections in U.S. history, and with less than two weeks to go even a minor scandal could completely change the outcome of the race.  Now is the perfect time for an October surprise.  If I was an operative for either Mitt Romney or Barack Obama, now would be the time to unleash any big secret that you were still holding back.  Americans tend to have very short attention spans, so you wouldn’t want to reveal your October surprise too early.  But now that the debates are all done, this is the perfect opportunity to bring the hammer down.  Of course our founding fathers are probably rolling over in their graves as they watch all this, but sadly the truth is that this is how the game of politics is played in America today.  Veteran political operatives on both sides know that it is either “eat or be eaten”, and this election is coming right down to the wire.  One nicely timed blow from either side could make all the difference.

Even a false rumor could change the outcome of the election if enough people believe it.  And I certainly would not rule out the possibility of operatives on both sides floating false rumors in the coming days in an attempt to get an edge.  After the election the rumors may turn out to be entirely baseless, but at that point nobody will be able to undo the results of the election.

Most Americans would be absolutely horrified to find out what goes on behind the scenes in political campaigns in this day and age.  A lot of political operatives will do literally anything to win.

Of course an October surprise is even more effective if it is actually true.  And there certainly seems to be a lot of important things that the American people do not know about Obama and Romney yet.

Did Barack Obama Sell Cocaine While He Was In College?

According to RadarOnline.com, a close friend of Barack Obama during his college years is ready to come forward with allegations that Obama sold cocaine while he was in college…

A man claiming to be a close pal to President Obama during college made contact with Republican operatives recently, ready to go public with claims that Obama used and sold cocaine in college, RadarOnline.com is reporting exclusively.

The operatives tried to spread the story through the media and the Romney campaign, a source close to the situation told Radar.

“At first he wanted to do a book,” a source close to the situation told RadarOnline.com about the alleged college pal. “But there just wasn’t enough time before the election.

If this story is true, it could potentially be absolutely huge.  But even if it comes out now, we probably won’t know whether it is true or not until after the election.

Liberal websites are going crazy over a story that alleges that Mitt Romney and other members of his family are “major investors” in a voting machine company that made the voting machines that will count the votes in Ohio on November 6th.

Well, according to Business Insider, the truth is actually a bit more complicated than that…

So Solamere may not have a direct or indirect investment in the voting machine company. But its partner H.I.G. does. And the partner, H.I.G., is run by executives who actively support the Romney campaign.

Needless to say, the truth is still very alarming.  What will people say if the voting results in Ohio are much more favorable for Romney than anticipated?

According to the Investigative Project on Terrorism, radical Islamists have been regularly visiting the White House during the Obama adminisration…

A year-long investigation by the Investigative Project on Terrorism (IPT) has found that scores of known radical Islamists made hundreds of visits to the Obama White House, meeting with top administration officials.

Court documents and other records have identified many of these visitors as belonging to groups serving as fronts for the Muslim Brotherhood, Hamas and other Islamic militant organizations.

The IPT made the discovery combing through millions of White House visitor log entries. IPT compared the visitors’ names with lists of known radical Islamists. Among the visitors were officials representing groups which have:

You can read the rest of the IPT report right here.

A Spanish Company Will Be Counting Many Of Our Votes?

As I have reported previously, a Spanish company known as Scytl will be involved in reporting election results for hundreds of jurisdictions across the United States on election day.  According to WND, there are serious concerns about the security of Scytl software…

Just prior to the midterms, Washington, D.C., tested its own new electronic-voting system and discovered it had been hacked.

As a program security trial, the D.C. Board of Elections and Ethics reportedly encouraged outside parties to hack and find flaws in its new online balloting system. A group of University of Michigan students then hacked into the site and commanded it to play the school’s fight song upon casting a vote.

The state of Florida has also found vulnerabilities in Scytl software…

Project Vote noted that in 2008, the Florida Department of State commissioned a review of SCYTL’s remote voting software and concluded, in part, that:

So will these vulnerabilities by exploited on November 6th?

Allegations Of Voter Fraud On Both Sides

As I wrote about the other day, both the Democrats and the Republicans have already been accused of committing voter fraud.

Down in Florida, voters are receiving letters in the mail questioning their citizenship and instructing them not to vote…

Voters are getting letters that look like they are from local elections offices, questioning their citizenship. But Local 6 has learned the letters are fake, and they are going out across Central Florida and many other parts of the state.

Officials on Monday said voters who had received the letters thus far are white, registered Republicans who consistently vote in elections.

“This is a major concern,” said Seminole County Supervisor of Elections Mike Ertel, who received a letter from a voter mailed from Seattle with no return address. “You should not expect a letter from your elections office saying, ‘You’re not registered to vote, please don’t go to the polls.’ That’s ridiculous.”

On Tuesday, the state of Florida said there have been reports from more than 20 counties where voters have received fraudulent letters impersonating supervisors of elections.

For much more on reports of voter fraud from all around the nation, please see this article: “Are Operatives From Both Parties Systematically Committing Election Fraud?”

Threats Of Violence If Romney Wins

Over the past few weeks, Obama supporters have been flooding social media with threats that they will riot in the streets of our major cities if Romney wins.

Many have even been threatening direct physical violence against Mitt Romney himself if Romney wins the election.

To see some of the most disturbing threats against Mitt Romney on Twitter, please see this article.  But please be warned that some of the foul language used in these threats is extremely strong.

It is absolutely mind blowing that the mainstream media is ignoring these threats which continue to endlessly pour in every single day.

Are they also going to ignore the rioting and violence that erupt once Romney wins?

An October Surprise From Gloria Allred?

RadarOnline.com is reporting that Gloria Allred is heading to court in an attempt to dig up some dirt on Mitt Romney…

Famed civil rights attorney Gloria Allred will be in a Boston area courtroom Wednesday in an attempt to unseal the sworn testimony given by Republican Presidential hopeful Mitt Romney, in a prior court case, RadarOnline.com is exclusively reporting.

“The Boston Globe is headed to court tomorrow morning for an emergency hearing in an attempt to obtain a court order to unseal the sworn testimony given by Mitt Romney in a prior court case and to lift a gag order so that the parties can speak about Romney. Gloria Allred will be in court representing one of the parties in the case,” a source close to the situation tells RadarOnline.com.

Could Gloria Allred once again change the course of an election?

So what do you think about all these rumors?

Do you have any to add to the list?