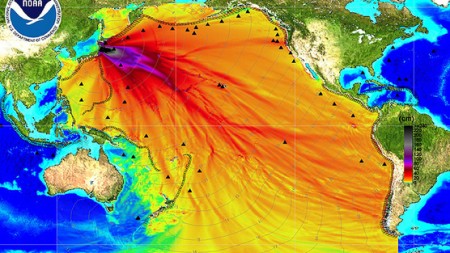 Right now, a massive amount of highly radioactive water is escaping into the Pacific Ocean from the ruins of the destroyed Fukushima nuclear facility in Japan.  This has been going on all day, every day for more than two years.  The enormous amounts of tritium, cesium and strontium that are being released are being carried by wind, rain and ocean currents all over the northern Hemisphere.  And of course the west coast of the United States is being hit particularly hard.  When you drink water or eat seafood that has been contaminated with these radioactive particles, they can stick around for a very long time.  Over the coming years, this ongoing disaster could potentially affect the health of millions upon millions of people living in the northern hemisphere, and the sad thing is that a lot of those people will never even know the true cause of their health problems.

For a long time, the Japanese government has been trusting Tepco to handle this crisis, but now it has become abundantly clear that Tepco has no idea what they are doing.  In fact, the flow of radioactive water has gotten so bad that authorities in Japan are now calling it an “emergency”…

Highly radioactive water seeping into the ocean from Japan’s crippled Fukushima nuclear plant is creating an “emergency” that the operator is struggling to contain, an official from the country’s nuclear watchdog said on Monday.

This contaminated groundwater has breached an underground barrier, is rising toward the surface and is exceeding legal limits of radioactive discharge, Shinji Kinjo, head of a Nuclear Regulatory Authority (NRA) task force, told Reuters.

The amount of water that we are talking about is absolutely enormous.  According to Yahoo, 400 metric tons of water is being pumped into the basements of destroyed buildings at Fukushima every single day…

The utility pumps out some 400 metric tons a day of groundwater flowing from the hills above the Fukushima Daiichi nuclear plant into the basements of the destroyed buildings, which mixes with highly irradiated water that is used to cool the reactors in a stable state below 100 degrees Celsius.

Tepco is trying to prevent groundwater from reaching the plant by building a “bypass” but recent spikes of radioactive elements in sea water has prompted the utility to reverse months of denials and finally admit that tainted water is reaching the sea.

And of course all of that water has to go somewhere.  For a long time Tepco tried to deny that it was getting into the ocean, but now they are  finally admitting that it is…

Tepco said on Friday that a cumulative 20 trillion to 40 trillion becquerels of radioactive tritium had probably leaked into the sea since the disaster. The company said this was within legal limits.

Tritium is far less harmful than cesium and strontium, which have also been released from the plant. Tepco is scheduled to test strontium levels next.

40 trillion becquerels of radioactive tritium have gotten into the Pacific Ocean?

And that is what they are publicly admitting.  The reality is probably far worse.

And all of that tritium is going to be around for a very long time.  You see, the truth is that tritium has a half-life of about 12 years.

But strontium is even worse.  Strontium can cause bone cancer and it has a half-life of close to 29 years.

Tepco said in late June that it had detected the highly toxic strontium-90, a by-product of nuclear fission that can cause bone cancer if ingested, at levels 30 times the permitted rate.

The substances, which were released by the meltdowns of reactors at the plant in the aftermath of the huge tsunami of March 2011, were not absorbed by soil and have made their way into underground water.

Cesium has an even longer half-life than strontium does.  It has a half life of about 30 years, and according to samples that were taken about a month ago levels of cesium at Fukushima have been spiking dramatically…

Samples taken on Monday showed levels of possibly cancer-causing caesium-134 were more than 90 times higher than they were on Friday, at 9000 becquerels per litre, Tokyo Electric Power (Tepco) revealed.

Levels of caesium-137 stood at 18 000 becquerels per litre, 86 times higher than at the end of last week, the utility said.

“We still don’t know why the level of radiation surged, but we are continuing efforts to avert further expansion of contamination,” a Tepco spokesperson stated.

When cesium gets into your body, it can do a tremendous amount of damage.  The following is an excerpt from a NewScientist article that described what happens when cesium and iodine enter the human body…

Moreover the human body absorbs iodine and caesium readily. “Essentially all the iodine or caesium inhaled or swallowed crosses into the blood,” says Keith Baverstock, former head of radiation protection for the World Health Organization’s European office, who has studied Chernobyl’s health effects.

Iodine is rapidly absorbed by the thyroid, and leaves only as it decays radioactively, with a half-life of eight days. Caesium is absorbed by muscles, where its half-life of 30 years means that it remains until it is excreted by the body. It takes between 10 and 100 days to excrete half of what has been consumed.

And it is important to keep in mind that it has been estimated that each spent fuel pool at the Fukushima nuclear complex could have 24,000 times the amount of cesium that was produced by the nuclear bomb that the U.S. dropped on Hiroshima at the end of World War 2.

That is a massive amount of nuclear material.  Chernobyl only contained 180 tons.

And of course the crisis at Fukushima could be made even worse at any moment by a major earthquake.  In fact, a magnitude 6.0 earthquake hit northern Japan on Sunday.

This is a nightmare that has no end.  Every single day, massive amounts of highly radioactive water from Fukushima is systematically poisoning the entire Pacific Ocean.  The damage that is being done is absolutely incalculable.

Please share this article with as many people as you can.  The mainstream media does not seem to want to talk about this, but it is a matter that is extremely important to every man, woman and child living in the northern hemisphere of our planet.