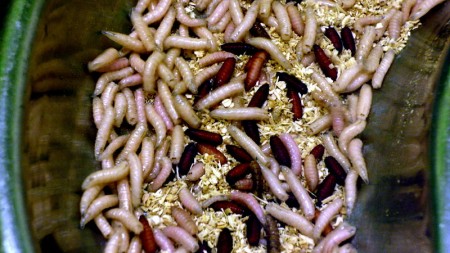 Would you eat a sandwich that contains meat from a chicken that had been fed a steady diet of maggots?  Would you eat a burger that comes from a cow that had been fed lots of gummy worms and expired candy?  Would you eat a burger that is made out of recycled human poop?  Those are just some of the bizarre solutions to the global food crisis that scientists are currently working on.  And without a doubt, we are rapidly approaching a day of reckoning as far as the global supply of food is concerned.  The global food supply is the lowest that it has been in nearly 40 years, but global demand for food just keeps rising.  In fact, global demand for meat and dairy products is projected to double by 2050.  So how in the world are we going to feed everyone?  That would be a great challenge even if we had good weather year after year, but in recent years our weather patterns have become increasingly erratic.  Intense drought in the breadbasket areas of the globe have caused harvests to be quite disappointing.  So what is going to happen if we have more drought over the next several years?  Could we potentially experience an unprecedented global food shortage and see food riots erupt all over the planet?

The way that our scientists are thinking about food is rapidly changing.  In the EU, a plan to feed maggots that have been raised on cow and pig excrement to cows and chickens that humans eat is in the process of being tested.  The following is how the Daily Mail described this plan…

A plan to feed animals with protein-rich maggots which have been reared on cow and pig excrement is currently being trialled by the EU.

Soya beans which are normally used in feed for animals such as chickens, pigs and fish, are in great demand so scientists and farmers have been searching for a cheap and viable alternatives.

The EU plan would see flies bred on an industrial scale using readily-available animal and vegetable waste, with the maggots, or larvae, which they create then being used for feed.

I don’t know about you, but I wouldn’t want anything to do with meat that comes from animals that have been fed a steady diet of maggots.

In the United States, the recent drought has caused many farmers to search out cheaper sources of food for their animals.  In some cases, farmers are actually feeding candy to their cattle.  According to CNN, this practice has become fairly widespread…

Cattle farmers struggling with record corn prices are feeding their cows candy instead.

Feeding candy to cows has become a more popular practice in tandem with the rising price of corn, which has doubled since 2009, fueled by government-subsidized demand for ethanol and this year’s drought. Thrifty and resourceful farmers are tapping into the obscure market for cast-off food ingredients. Cut-rate byproducts of dubious value for human consumption seem to make fine fodder for cows. While corn goes for about $315 a ton, ice-cream sprinkles can be had for as little as $160 a ton.

But I would rather eat a burger that comes from a cow that has been raised on candy than eat one of the burgers that a team of scientists in Japan are developing.

It is hard to believe, but over in Japan they are actually developing burgers that come from human excrement.

Unfortunately, these “poop burgers” are not a joke.  The following is an excerpt from a Fox News article…

Anyone up for some poop burgers?

He thinks that’s perfectly good protein you’re sending out to sea, and he’s found a way to extract it, mix it with steak sauce and create a fecal feast fit for a king.

Why in the world would anyone come up with such a thing?

Well, apparently Tokyo sewers are being overwhelmed by human sludge, and scientists were asked to find a way to do something with it…

Tokyo is swimming in sewage mud, it seems, and there’s only one way it can save itself and that’s eat it.  Prof Ikeda found the mud was loaded with protein due to the high bacteria content. Combine it with reaction enhancer and put it in a magical machine called an “exploder” and artificial steak comes out the other end.

Sadly, in a few years these kinds of products may become common on our store shelves as global food supplies get much tighter.

Right now, the world is eating more food than it is producing and the number of hungry mouths just continues to grow.  Some experts are projecting the worst for the years ahead…

As I mentioned in a recent article, more than 3 billion people currently live on less than 2 dollar a day.  A very large percentage of the global population is in survival mode from day to day.

Things are going to get very, very tight at some point.  This is one reason why a lot of people are storing up food right now.  You want to store up during the “good times” so that you can be ready for the bad times.

Unfortunately, time is quickly running out.  I hope that you are preparing while you still can.