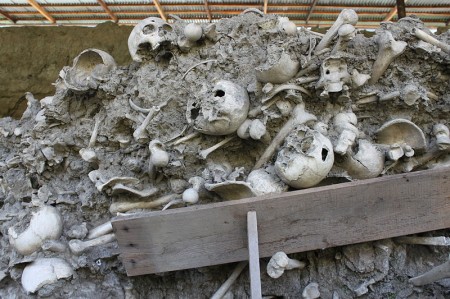 Billions of dollars is being poured into an effort to reduce population growth all over the world, and most people do not even know that it is happening.  These efforts are often promoted under such labels as “family planning”, “abortion rights” and “public health programs”, but the primary goal is always to get women to have less children.  This population control agenda has millions upon millions of supporters all over the planet and it is gaining even more adherents with each passing day.  It is being taught in colleges, universities and schools all over the globe.  It is being promoted by radical humanists who are completely and totally convinced that the core crisis that humanity is facing today is that there are way too many people living on this planet.  They fully believe that overpopulation is the root cause of most of our economic, social, political and environmental problems.  In fact, the truth is that many of them actually believe that they are literally in a “life or death” race to save the planet.  Many of the “true believers” are entirely convinced that if human population numbers are not greatly reduced from where they are now, the planet we are living on will be completely destroyed.  That is why many of these radical humanists would absolutely love for you and I to die.  From their perspective, the less people the better.

Many that write about the population control agenda make it sound as if there is just a “tiny elite” that is promoting this philosophy.  Sadly, that is simply not accurate.  The truth is that this twisted agenda is being taught at the majority of the colleges and universities in the United States.  It is being promoted in our television shows and in our movies.  It is even being taught to elementary school children.

As a result, more Americans that ever are embracing this philosophy.  You would be surprised how many people actually believe that our growing population will soon cause major shortages of food, water, oil and other important resources.

For example, the following is an excerpt from one comment that was left on one of my previous articles about population control….

It is undeniable, the earth is being completely destroyed and while the planet could theoretically sustain probably between 13 to 16 billion people, this would require 2 developments to occur:

1. There would have to be a global resource-rational production & distribution scheme which would ensure that each person could have enough air, water & food, in an environment where, due to the resulting scarcity on clean resources, excess & hoarding would be directly correlated with human death.

2. There would have to be a dramatic reduction in the quality of life for a dramatically higher percentage of the world’s population than currently experience miserable lives.

Rather than accept these awful outcomes of unfettered industrialization, let us instead embark on a course to drastically limit the global population to around 500 million.

Does that figure sound familiar?

It should.  That is the exact target number for the global human population that we find on the Georgia Guidestones.

But when the population of the earth was back at 500 million did we still have poverty, war, famines and other similar problems?

Of course we did.

Reducing the population of the planet by more than 90 percent would not wipe out any of our problems.

But this sick agenda is being endlessly promoted in the mainstream media.  For example, during a recent radio interview HBO personality Bill Maher stated that he is “consistently pro-death” and that he wants society to find ways to get more people to die off…

You can hear Maher making these comments right here.

If you think that is sick, just check out this next example.

Two “scientists” recently published a paper in the Journal of Medical Ethics in which they called for the legalization of the murder of newborn babies.  Instead of “murder”, they want it to be called “after-birth abortion” instead….

“[W]hen circumstances occur after birth such that they would have justified abortion, what we call after-birth abortion should be permissible. … [W]e propose to call this practice ‘after-birth abortion’, rather than ‘infanticide,’ to emphasize that the moral status of the individual killed is comparable with that of a fetus … rather than to that of a child.

Therefore, we claim that killing a newborn could be ethically permissible in all the circumstances where abortion would be. Such circumstances include cases where the newborn has the potential to have an (at least) acceptable life, but the well-being of the family is at risk.”

Actually, you would probably be surprised at how many people there are that will read this article and find nothing wrong with the idea of “after-birth abortion”.

Respect for life is rapidly declining in our society, and a big reason for that is because the population control agenda is being pushed at our colleges and universities.

Just check out this quote from an actual classroom lecture by MIT professor Penny Chisholm….

“The real trick is, in terms of trying to level off at someplace lower than that 9 billion, is to get the birthrates in the developing countries to drop as fast as we can. And that will determine the level at which humans will level off on earth.”

There is something deeply insidious about specifically targeting the “developing countries” for population control.  Do you think that Professor Chisholm really understands the full implications of what she is saying?

This sick population control agenda is also being heavily promoted in Europe.

“Scenarios for a One Planet Economy in Europe” examines four different scenarios that could play out as Europe moves toward a “green” future.  The following is a quote from a section of the report that discusses a scenario entitled “Breaking Point”….

“The EU must take strong measures to limit population growth both in Europe, but more importantly in the rest of the world in the face of increasing demand at a time when technological innovation is stagnant and global shortages (e.g. of fossil fuels and agricultural land) are pushing up prices. In some European countries, life expectancy stagnates; in others it falls.”

Once again, we see an example of where population growth for “the rest of the world” is considered to be absolutely crucial.  And that tends to be the attitude of many of these radical humanists.  It is always “someone else” that is the biggest part of the problem.

Farther down in the report, it is suggested that financial coercion could be used to motivate families to have less children….

“Beginning in 2012, one of the measures taken to control population growth was to phase-out child benefits for multi-children families. By 2020, benefits were only provided for up to a maximum of 2 children. As the economy in general has become more labour intensive, immigration policies were relaxed in order to attract low skilled labour, especially for the agriculture sector. This further adds to social tension in the EU. Bilateral trade deals require trading partners to implement population control measures.”

And in many of the wealthier countries we are also seeing fertility levels steadily drop.  Thanks to all of the garbage in our food, air and water it is getting harder and harder to get pregnant.

A recent article by Anthony Gucciardi included the text of an email from a biotech scientist who admitted that he was aware that his work was contributing to reduced fertility.  What you are about to read is absolutely stunning….

In the email, the biotech scientist known as ‘Ed’ explains how he thinks it’s absolutely ‘awesome’ that GMOs are contributing to infertility, as he believes the world is overpopulated. He also attacks me personally for my work on warning the public over the dangers of GMOs (particularly the latest news over the research linking GMOs to organ failure and tumor development). As of right now we have not released the full name of ‘Ed’ nor his organization, but we may in the future after considering the legal concerns.

Here is the Full Email:

I am no traitor against humanity. If this **** causes infertility… Awesome!!

The world is over-populated, and people need to stop having children. This is one of earth’s largest problems.

The reason they do, is that the earth cannot produce enough food on its own to feed us all.

This is why GMO is actually saving the planet.

A REAL ‘traitor to humanity’

You can also view the screenshot for yourself here.

Many of those promoting genetically-modified foods for the public actually privately insist on organic foods for their own families.

They know what they are doing, but they truly believe that it is good for the planet.

For these radical humanists, the ends often justify the means.  Many of them are entirely convinced that humanity is only going to have a bright future if the global population is reduced dramatically.  So they are willing to take extraordinary measures for “the greater good”.

The mindset of some of these radicals is absolutely frightening.  For example, Dave Foreman, the co-founder of Earth First, once said that reducing the global population to 100 million is one of his three primary goals….

“My three main goals would be to reduce human population to about 100 million worldwide, destroy the industrial infrastructure and see wilderness, with it’s full complement of species, returning throughout the world.”

This kind of philosophy rises to the surface in some of our most trusted publications quite often as well.

For example, Time Magazine once ran an article entitled “How To Die” that explained why it is a good thing to kill off the elderly.

Newsweek actually once ran an article entitled “The Case For Killing Granny“.

Sadly, there was not a massive national uproar over either of those articles.  Yeah, a few people were upset, but most Americans did not get seem too disturbed.

The truth is that the American public is starting to buy into the propaganda that getting married and having children is not such a great thing.

Today, an all-time low 44.2% of all Americans between the ages of 25 and 34 are married, and fertility rates in the U.S. are steadily dropping.

So the numbers are definitely going in the direction that population control advocates want.

This twisted philosophy is even represented in the White House.  Barack Obama’s primary science adviser, John P. Holdren, once co-authored a book in which he advocated the mass sterilization of American women.  The following is just one of the incredibly disturbing quotes from Holdren’s book….

And this population control agenda was even reflected in the new health care law.  It is not an accident that sterilization won’t cost women a single penny under Obamacare.

They want U.S. women to choose sterilization.  They want to make it as easy for them as possible.

The more women that get sterilized, the less children that will be running around.

There is so much more that could be written about the population control agenda of these radical humanists.  The following are 10 of my previous articles about this issue….

#6 “Yes, They Really Do Want To Reduce The Population – 22 Shocking Population Control Quotes From The Global Elite That Will Make You Want To Lose Your Lunch”