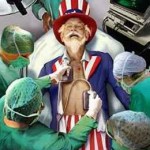 Remember the days when Americans could freely contract with private health insurers for whatever level of health coverage that they wanted for themselves and their families? Those days are over. In the health care bill being rammed through the U.S. Senate, Americans are given 4 health care plan templates from which they must choose and 2 places from which they can get that coverage (either their workplace or from a state-based “insurance exchange”). You see, this is the new socialist America – where health care choices are limited and where conformity is required.

But unless what all Americans “want” is contained in the four standardized U.S. government health plan templates that is most definitely not going to be the case.

You see, private health insurers will still be involved in offering health insurance under the new plan, but their health plans will be required to meet the standards set forth by the U.S. government templates. The New York Post puts it this way…..

Consumers must buy policies from their employers or through the exchanges — but, either way, their choice of coverage is limited to one of four basic insurance plans that the government sanctions.

Private insurers will still compete to offer policies but must model their coverage on one of these four templates. In short, the Senate bill explicitly standardizes health benefits and then establishes elaborate mechanisms (including subsidies and penalties) to pay for them.

The vast majority of Americans have not even noticed that their health care choices are about to be scaled way back, but the Wall Street Journal has.  In a scathing editorial, the lack of flexibility and choices in these “health plans” was pointed out….

Unnoticed by the press corps, the Congressional Budget Office argued recently that the Senate bill would so “substantially reduce flexibility in terms of the types, prices, and number of private sellers of health insurance” that companies like WellPoint might need to “be considered part of the federal budget.”

But even among the four health plan templates there apparently is not that much of a difference.  The New York Post describes it this way….

While these four plans vary from low- to high-cost options, the benefits offered under them are pretty much the same. The difference between the cheaper and pricier plans is mostly the amount of cost sharing (e.g., you pay less for insurance if your co-pays are higher).

It means that everyone is going to end up with essentially the same health insurance.

2 Places To Get Health Coverage

The Senate health care reform bill also gives Americans just two places from which to acquire health care coverage.  Either they can get it from their employer, or they can buy it from one of 50 state-based insurance “exchanges”.

Reuters has posted a breakdown of how these state-based insurance exchanges will work….

The proposed government-run insurance option would be dropped from the bill. Instead, the federal government would contract with insurers for two national or multi-state health insurance plans that would be offered through the new insurance exchanges. The U.S. Office of Personnel Management, which oversees health policies for 8 million federal workers and their families, would manage the public plans.

So what does this do to health insurance companies?

It fundamentally changes their nature.

The Wall Street Journal put it this way….

So where does this leave the American people?

It leaves them with a giant socialist mess of a health care system.

The American people are going to be furious when they learn about the minimal health care choices that they have under this new system.

Experienced U.S. doctors will leave or retire in massive numbers.  One recent poll found that 45 percent of American doctors said that they would quit or retire if Barack Obama’s health care reform plan is adopted.

If there is a mass exodus of doctors, it would absolutely cripple the health care system in America.

The level of medical care in America will also probably experience a dramatic decline if the Senate plan is adopted.  Just ask veterans or those on Indian reservations how well U.S. government managed health care works.

The truth is that whenever the U.S. government gets involved in health care it quickly becomes a nightmare.

But now that is what all Americans will have – government planned health care.

The new Wall Street Journal editorial about the Senate plan expressed amazement at “the hubris of an Administration that thinks it can substitute government planning for market forces in determining where the $33 trillion the U.S. will spend on medicine over the next decade should go.”

The truth is that the U.S. government is replacing a capitalist health care system with a socialist one.

But the Democrats are going to ram it down our throats anyway.