It is absolutely mind blowing that any Republican would ever consider casting a single vote for Newt Gingrich.  The truth is that Newt Gingrich is not a real conservative.  He isn’t even close.  After he left Congress, he spent years portraying himself as a “progressive” and he devoted a lot of time and resources to promoting liberal causes.  But now that he is running for office as a Republican again, all of a sudden he is trying to sound like a conservative.  And it is fooling a whole lot of people.  One recent poll had his support up to 38 percent.  But a Gingrich administration would be a total disaster for America.  A Gingrich administration would essentially be just about the same as a second Obama administration.  That is how liberal Newt Gingrich is.  Gingrich is a big time RINO (“Republican in name only”) that is so liberal that he should actually be in the  other political party.  If you believe that Newt Gingrich is a real conservative and you plan to vote for him, then you are being incredibly foolish.

So what is so wrong with Newt Gingrich?

Well, for one he is for an individual health care mandate.

Republicans are supposed to be against Obamacare, and yet a huge percentage of them are supporting a candidate that was pushing an individual mandate way before Obamacare was ever even invented.

In June 2007, Gingrich made the following statement….

“Personal responsibility extends to the purchase of health insurance. Citizens should not be able to cheat their neighbors by not buying insurance, particularly when they can afford it, and expect others to pay for their care when they need it.”

Gingrich says that he will repeal Obamacare, but back in 2008 Gingrich wrote a book entitled “Real Change” in which he endorsed an individual health care mandate.

The truth is that Newt Gingrich is not a real conservative.

He just plays one on TV.

Gingrich has reaffirmed his commitment to an individual mandate over and over.  The following is an excerpt from an exchange between host David Gregory and Gingrich during an interview earlier this year on NBC’s Meet The Press….

MR. GREGORY: You agree with Mitt Romney on this point.

REP. GINGRICH: Well, I agree that all of us have a responsibility to pay–help pay for health care. And, and I think that there are ways to do it that make most libertarians relatively happy. I’ve said consistently we ought to have some requirement that you either have health insurance or you post a bond…

REP. GINGRICH: …or in some way you indicate you’re going to be held accountable.

MR. GREGORY: But that is the individual mandate, is it not?

REP. GINGRICH: It’s a variation on it.

If you are against Obamacare, you must be against Newt Gingrich.

There is no middle ground.

But this is not the only issue where Gingrich has been showing his liberal tendencies.

For example, before he was running for president, he was running around the country with Al Sharpton promoting the socialist education policies of the Obama administration.

Also, back in 2008 Gingrich actually did a television commercial with Nancy Pelosi in which he declared that “our country must take action to address climate change”.

The following is the sickening video that he did with Nancy Pelosi….

Not only that, Gingrich also has promoted the idea of a “cap and trade” carbon trading scheme.  Back in 2007, Gingrich said the following….

“I think if you have mandatory carbon caps combined with a trading system, much like we did with sulfur, and if you have a tax-incentive program for investing in the solutions, that there’s a package there that’s very, very good. And frankly, it’s something I would strongly support.”

In addition, as we have seen during the recent debates, Gingrich openly supports amnesty for millions of illegal aliens.

So how in the world is Gingrich still leading in the polls?

Are Republicans this stupid?

It is almost as if they don’t even care about all of the corruption that has been revealed.

For example, according to Bloomberg, Gingrich earned somewhere between $1.6 million and $1.8 million lobbying for Freddie Mac between 1999 and 2008.  He was supposed to lobby Republicans in Congress and convince them that Freddie Mac was doing a good job….

Former Freddie Mac officials familiar with his work in 2006 say Gingrich was asked to build bridges to Capitol Hill Republicans and develop an argument on behalf of the company’s public-private structure that would resonate with conservatives seeking to dismantle it.

He was expected to provide written material that could be circulated among free-market conservatives in Congress and in outside organizations, said two former company executives familiar with Gingrich’s role at the firm. He didn’t produce a white paper or any other document the firm could use on its behalf, they said.

But now Gingrich says that he was not doing any lobbying.

The truth is that it is really hard to know that if we can believe anything that Gingrich is saying these days.  Just check out the amazing video posted below.  You have got to see this….

So why are so many Tea Party activists supporting Newt at this point?

Newt represents everything that they are supposed to be against.

For example, In 2008 Newt Gingrich declared that he would have voted for the TARP bailout if he was still a member of Congress.

Isn’t the Tea Party supposed to be against bailouts?

The Tea Party is supposed to be against higher taxes too.

But Newt Gingrich voted for higher taxes on numerous occasions.

In fact, while Newt was the Speaker of the House the amount of taxes collected by the U.S. government soared from $1.001 trillion to $1.511 trillion.

Does that sounds conservative to you?

In addition to everything else above, Newt Gingrich has shown that he does not have the character to be president.

The Republican Party is supposed to be the party of “family values”, but they are getting ready to send someone to the White House that has a track record that would make Bill Clinton blush.

The following is how a recent Business Insider article described the “skeletons in the closet” from his personal life….

Newt’s personal baggage is either weird or scary. He married his high-school geometry teacher. He cheated on her and divorced her while she had cancer. So he married Marianne Ginther six months later. But that wasn’t to last.

Gingrich conducted a tawdry affair behind her back with one of his staffers while making political hay out of Clinton’s affair with a White House intern. He then divorced Marianne and married the staffer.

How in the world can Republicans be supporting this guy?

The following video has more about Newt’s marital issues….

If the Republicans nominate this guy, Christians should leave the party in droves.

For much more on the skeletons in Newt’s closet, just check out this shocking website.

The sad truth is that Newt Gingrich is not a real conservative.  He is not even close.

His tough talk about Obama is just an illusion.  It is just a trick to get elected.

Yes, four more years of Barack Obama would be a complete and total nightmare for America.

But so would four years of Newt Gingrich.

And then after Gingrich failed as president we would almost certainly get Hillary.

Is that what you want?

Please share this information about Newt Gingrich with as many people as you can.  There is still time to turn this election season around. 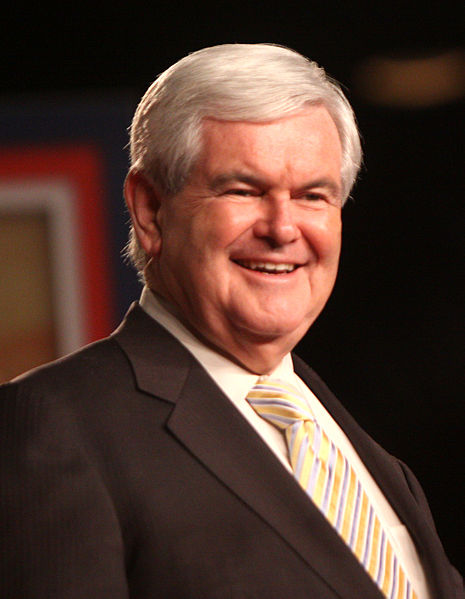