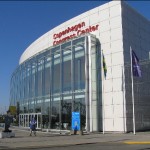 As the U.N. Copenhagen climate change summit begins today, prostitutes in that city are looking forward to doing a brisk business with government officials who are flying in from all over the world.  However, things are not looking so great for anyone who would dare to protest the climate change summit.  Authorities have prepared small metal cages for the “extended detention” of protestors.  By publicizing the severe security measures being implemented ahead of time, summit organizers appear to be attempting to send this message to opponents: “Don’t mess with us!”

Denmark is one of the growing number of countries where prostitution is actually legal.  Instead of being called “prostitutes”, they are known as “sex workers”.  You can almost hear thousands of world officials salivating as they arrive in Copenhagen anticipating a very productive and stimulating time away from their home countries.

But not everyone is thrilled.  Copenhagen’s mayor actually sent out postcards to 160 Copenhagen hotels urging summit delegates to “be sustainable – don’t buy sex”.

But since prostitution is legal in Denmark, there is not much the mayor can do to stop it.  In fact, many of Copenhagen’s “sex care workers” are reportedly offering free sex to anyone who can produce one of the mayor’s postcards.  They are furious that the mayor would try to disrupt the busiest time that they will see this entire year.

In fact, a spokeswoman for the Sex Workers Interest Group said that Mayor Bjerregaard is “abusing her position as Lord Mayor in using her power to prevent us carrying out our perfectly legal job”.

On another note, law enforcement officials in Copenhagen have constructed a “holding facility” that contains approximately three dozen small steel cages which they say can accommodate more than 350 protesters.

While some observers have criticized these steel cages as being inhumane, the reality is that law enforcement authorities now see these kinds of “security measures” as routine whenever globalist leaders assemble around the globe.

The New York Times quotes Per Larsen, the top coordinating officer for the Copenhagen police force as saying that this “is surely the biggest police action we have ever had in Danish history”.

In addition to the new holding facility with the steel cages, Denmark also rushed new laws through Parliament that allow for stiffer fines and “extended detention” for protestors.  Law enforcement authorities have also made it a point to have public displays of newly acquired antiriot equipment – in hopes that potential protesters would “get the message”.

So why would protesters be so upset?

Is it because they don’t have anything better to do?

No, it is because a group of mostly unelected world leaders is poised to take a gigantic step towards world government.  An elaborate web of rules and regulations is expected to be agreed to in Copenhagen that will have fundamental consequences for every man, woman and child on earth.  The global agenda of the ruling elite of the world is about to be ruthlessly pushed forward at the expense of the middle class and the poor – all in the name of “saving the earth” from carbon dioxide.

But anyone who dares to protest this will be jammed into a small steel cage while the global elitists run around Copenhagen cavorting with prostitutes.