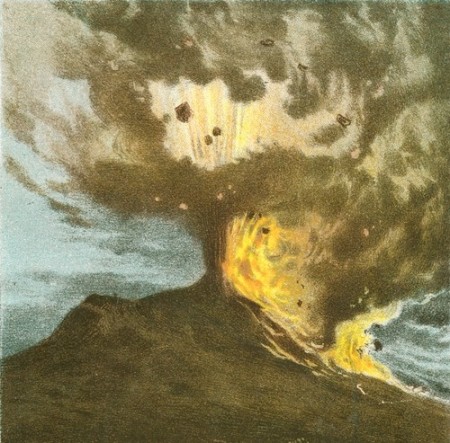 All of a sudden, the Ring of Fire is starting to tremble violently.  Last month, we had a whole bunch of major earthquakes along the Ring of Fire, and this month volcanoes all over the Ring of Fire are erupting.  Of course there has always been seismic activity within this giant band that stretches around the Pacific Ocean.  After all, approximately 75 percent of all volcanoes are located in the Ring of Fire and approximately 90 percent of all global earthquakes occur along the Ring of Fire.  But what is alarming is that the level of activity appears to be rising.  Chile is experiencing almost constant shaking by earthquakes, a volcano in Peru just awakened for the first time in 40 years, and major volcanic eruptions have just taken place in Ecuador, the Kamchatka peninsula and off the coast of Japan.  The west coast of the United States also lies along the Ring of Fire, but so far it has gotten off easy.  Yes, there has been a little bit of shaking in southern California in recent weeks, but it hasn’t been too bad.  But scientists assure us that will change.  At some point, there will be a major seismic event along the west coast.  It is only a matter of time.

Unfortunately, the mainstream media in the United States pays very little attention to seismic activity around the rest of the world unless it happens in a heavily populated area.  But the truth is that we have been witnessing some very unusual things lately.

For example, a volcanic eruption off the coast of Japan has created a brand new Island called “Niijima” that is literally eating another small volcanic island next to it…

Niijima is Japan’s newest island located in the Philippine Sea that has consistently grown in size since its inception in November. A NASA satellite image from March 30 found that Niijima merged with nearby island Nishino-shima.

Niijima resulted from a seafloor volcano that sprouted in the western Pacific Ocean this past November. It is located 600 miles south of Tokyo in the Pacific Ring of Fire, which spans from the coast Chile to Alaska and Siberia and then south to New Zealand. The volcanic island has not stopped erupting since November.

As a result of the nonstop eruption, Niijima recently merged with another nearby volcanic island, Nishino-shima. The newly formed island is about 3,280 feet across and sits 196 feet above sea level.

In Ecuador, the Tungurahua volcano has been extremely active lately.  In fact, it shot hot ash 10 km up into the sky just the other day…

A volcano in central Ecuador has spewed up a column of hot ash and smoke 10 kilometres high, increasing fears of an eruption.

Activity has been building at the Tungurahua volcano 130 kilometres south of the capital Quito since early February.

On Friday (Saturday Australian time), experts reported a loud explosion that lasted for five minutes and an expulsion of ash.

Most Americans don’t realize this, but there are some very powerful volcanoes in Russia as well.  On the Kamchatka peninsula, which is located on the east coast of Russia, a large volcano has belched a column of ash 6 km into the air…

Down in Peru, a volcano that has been dormant for most of the past 40 years has suddenly “awakened” and is now “spewing ash and dust into the sky”…

It’s been four decades since a volcano in Peru has awakened, but on Tuesday, it came back to life and began spewing ash and dust into the sky. The volcano is located in southwestern Peru and has led to more than 50 people being evacuated from the nearby village of Querapi.

So should we be alarmed by all of this?

Without a doubt, it is normal for volcanoes to erupt and for the earth to shake along the Ring of Fire.

But what is a bit concerning is that the intensity and the frequency seems to be picking up.

Just look at what has been happening down in Chile.  We have seen dozens upon dozens of large earthquakes down there over the past month, and there have been eight earthquakes of magnitude 4.0 or greater in Chile over the past 24 hours alone.

Hopefully things will settle down soon.

But if they don’t, it will probably only be a matter of time before the west coast of the U.S. joins the party.

Scientists have been warning about “the Big One” down in California for decades.  But up until now, it hasn’t happened and people have gotten complacent.  Scientists tell us that a magnitude 7.5 earthquake along the Puente Hills fault in southern California would be “the quake from hell” and would cause hundreds of billions of dollars of damage.  An earthquake of magnitude 8.0 or greater in the same location would be catastrophic beyond what most people would dare to imagine.

And do you remember the devastation that the eruption of Mount St. Helens caused back in 1980?

Well, that was small potatoes compared to what we could eventually see up in the Northwest.

In Oregon, Mt. Hood experienced a swarm of more than 100 earthquakes in just a few days last month, fueling fears of an eruption.

So does that video actually prove anything?

But what we do know is that certain areas of Yellowstone have been experiencing “ground uplift” in recent months, and there has been some highly unusual earthquake activity in the park in recent weeks.  In fact, one of the earthquakes was the largest to be recorded at Yellowstone in about 30 years.

Does that mean that something major is going to happen soon?

Let’s hope not, because a major eruption of the Yellowstone supervolcano would end life as we know it for most of the country.

We have entered a time of heightened seismic activity all over the globe.  Even with all of our modern technology, we are still at the mercy of natural disasters.

If you are living along the west coast or near one of these volcanoes, your life could literally change at any moment.