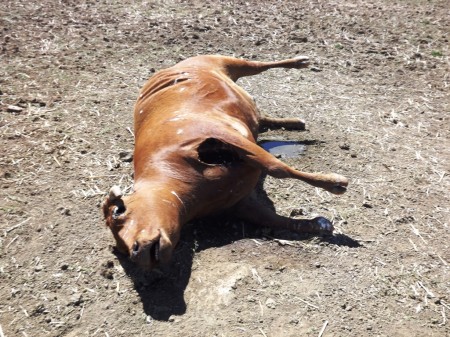 All over the United States, cattle are being brutally mutilated and nobody seems to know who is doing it.  Hearts, udders, teets, ears, tongues and reproductive organs are being removed, and in most of these cases the cuts are made with surgical precision and no trace of blood is left behind at the scene.  Sometimes the mutilated cattle are left in the mud or in deep snow, but there are no footprints or any other signs that anyone had ever been there.  This phenomenon has been going on for many years, especially in the western half of the U.S., and yet authorities have no leads and absolutely no explanation for why this is happening.  Could it be possible that there is not a natural explanation for this unexplained mystery?

That is what one rancher out in Missouri thinks.  She has had several cattle mutilated over the past few years, and the latest incident that happened on her ranch got so much national attention that it even made the Drudge Report.

The mutilation of her cows fits the same pattern that we have seen all over America, and she is convinced that it could be the work of aliens.  The following is how the CBS affiliate in St. Louis described this case…

Who would cut the tongues and take the reproductive organs from several cows? That’s the mystery police in a small town 90 miles away from Kansas City are dealing with.

Robert Hills, Henry County Sheriff’s Chief Deputy, says the first cow was discovered in December of 2011, the second and third this summer. All were female cows and were owned by rancher Lyn Mitchell.

Why would someone do something like this?  The kinds of mutilations that were done to her cattle are absolutely disgusting…

The next two discovered on July 9th and 19th of this year had their tongues removed along with their udders, anus, reproductive organs, and ears. A veterinarian wasn’t called to examine the first two cows.

But one did examine the third one.

Mitchell said the veterinarian told her the cuts to the cow were precise and surgical. Also what seems to be the common denominator of all these incidents is the lack of blood and other bodily fluids surrounding the area and inside the animal.

Posted below is a video of Lyn Mitchell describing what happened to her cattle.  Nobody should ever have to go through something like this…

Unfortunately, this has been happening all over the United States.  The first reported case of this phenomenon happened back in 1967, and most of the reported cases have been in the western half of the country.  The following is from the Wikipedia article on this phenomenon…

Cattle mutilation (also known as bovine excision) is the killing and mutilation of cattle under apparently unusual or anomalous circumstances. Sheep and horses have allegedly been mutilated under similar circumstances.

A hallmark of these incidents is the surgical nature of the mutilation, and unexplained phenomena such as the complete draining of the animal’s blood, loss of internal organs with no obvious point of entry, and surgically precise removal of the reproductive organs and anal coring. Another reported event is that the animal is found dumped in an area where there are no marks or tracks leading to or from the carcass, even when it is found in soft ground or mud. The surgical-type wounds tend to be cauterized by an intense heat and made by very sharp/precise instruments, with no bleeding evident. Often flesh will be removed to the bone in an exact manner, consistent across cases, such as removal of flesh from around the jaw exposing the mandible.

Since the time that reports of purported animal mutilations began, the causes have been attributed variously to natural decomposition, normal predators, cryptid predators (like the Chupacabra), extraterrestrials, secretive governmental or military agencies, and cults.

Many skeptics have attempted to blame predators for this phenomenon, but if you ask the ranchers that have been victimized, they will clearly tell you that there is no way that predators could have done this.  For example, the following is from a story about another case that occurred out in Colorado a few years ago…

Manuel Sanchez tucks his leathery hands into well-worn pockets and nods toward a cedar tree where, last month, he found his fourth mysteriously slaughtered calf in as many weeks.

Four calves, all killed overnight. Their innards gone. Tongues sliced out. Udders carefully removed. Facial skin sliced and gone. Eyes cored away. Not a single track surrounding the carcasses, which were found in pastures locked behind two gates and a mile from any road. Not a drop of blood on the ground or even on the remaining skin.

So if predators are not responsible, then who is?

On his blog, paranormal researcher LA Marzulli explained the conclusion that he has come to after his many years of research…

In one instance that UFO Hunters reported, the carcass of a mutilated cow was found in six inches of new snow, and there were no footprints around it. It appeared as if it had dropped from the sky. Cattle Mutilations, in my opinion, are but another facet of the UFO phenomena. Are these bovine body parts used in the genetic engineering of alien/human hybrids that Dr. Jacobs and others tell us is happening? Does this mirror what happened long ago when the fallen angels did much the same thing, as described in Genesis 6? Are we once again living in times that are similar to the Days of Noah? In my opinion, the answer is yes. We are looking at the manifested works of fallen angels. Their actions are nefarious and pernicious. How can any one who examines a cattle mutilation, say that those responsible are somehow benevolent? In order to believe that you have to check your brain at the door. Yet we see in some circles of Ufology, that this is precisely the case. The disclosure crowd wants us to embrace the idea that E.T., is benevolent. First of all, this is not E.T. It is the fallen ones, the dark forces of spiritual wickedness that is manifesting, in what I believe are the last days. Think about this, why take a cow or steer, then mutilate it in the most horrific way and then leave it in plain sight? As I stated before, it is deliberate. It causes fear, and fear is the currency of the Luciferians, or satanic beings that are promulgating this in the first place. It is time to realize that this phenomena is not something from the lunatic fringe, nor is it a one time incident. It is real, and burgeoning and not going away! The farmer who was interviewed by UFO hunters had lost 27 cows since 1992, to the mutilation phenomena. He was unnerved and plainly at his wits end. He is getting out of the business and who could blame him, as his life has intersected with High Strangeness. He is dealing with spiritual wickedness, in high places. Rulers and principalities that are fallen, satanic, beings who hate mankind. The enemy is real and cattle mutilations are an example of his calling card.

Who do you believe is responsible for doing these things?