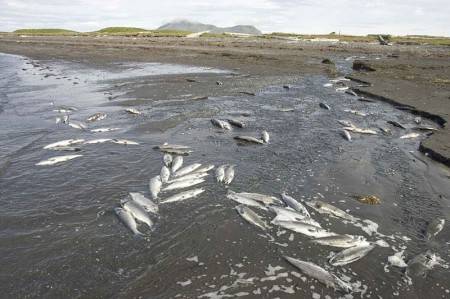 Millions upon millions of fish are suddenly dying in mass death events all over the world, and nobody seems to know why it is happening.  In many of the news reports that are linked to below, locals are quoted as saying that they have never seen anything like this before.  So is there a connection between all of the fish deaths that are now occurring all over the planet?  If there is a connection, is there anything that we can do to stop the fish die-off?  Sadly, because the big mainstream news networks in the United States have been virtually silent about this phenomenon, most Americans have absolutely no idea that it is happening.  Millions of fish are dying in mass death events every single month and most of the public is totally clueless.

Please share the list posted below with as many people as you can.  This list was originally started by Frank DiMora, but I have edited it and expanded it.  If there were just three or four items on this list, you could dismiss these news stories as coincidences, but taken together this list really is quite startling…

–July 18, 2013: Large numbers of fish washing up on the shores of Lake Michigan

–July 19, 2013: THOUSANDS OF TONS of fish have died in Lake Tondano, Indonesia

–July 25, 2013: Hundreds of fish found dead in a park pond in Birmingham, England

–July 29, 2013: Hundreds of dead fish wash ashore “due to pollution” on beach in Veracruz, Mexico

–July 29, 2013: Thousands of fish die “due to heat and storms” in Handsworth Park, Birmingham, England

–August 6, 2013: Hundreds of dead fish lining the shore of a pond in Toronto, Canada

–August 7, 2013: Thousands of dead fish found floating in a river in Hangzhou, China

–August 8, 2013: Tons of fish washed up on the shores of Karachi, Pakistan

And remember, the list compiled above represents less than a one month period.  The truth is that we have been seeing massive fish die-offs all over the globe month after month.

Is there anything we can do to stop it?

I would love to hear what you think.  Please feel free to share your opinion by posting a comment below…