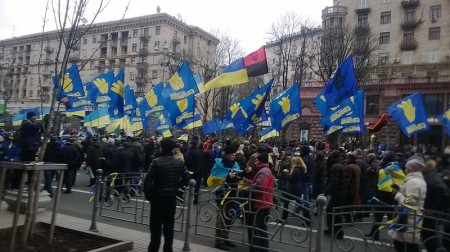 In World War II, the United States fought against rabidly anti-Semitic fascists.  In 2014, the United States helps them overthrow democratically-elected governments.  And the sick thing is that the mainstream media is acting an an accomplice because it is purposely ignoring or greatly playing down the rabid anti-Semitism in Ukraine.  The anti-Semitism of many of the “reformers” that have seized power in Kiev does not fit with the narrative that the U.S. government is trying to push, so the mainstream media conveniently turns a blind eye to the fact that the United States is essentially helping neo-Nazis take power.  In fact, leaders of the Svoboda Party have been appointed to numerous important positions throughout the new government.  As you will read about below, the head of the Svoboda Party has denounced the “criminal activities” of “organized Jewry”, another top Svoboda official regularly quotes Joseph Goebbels, and the Party itself was known as “the Social-National Party” (in reference to National Socialists) until 2004.  There is a long history of anti-Semitism in Ukraine, but our politicians in Washington D.C. don’t seem to care about that.  All they seem to care about is making sure that there is not a pro-Russian government in Ukraine no matter what the cost.

There is a reason why Russian President Vladimir Putin cited “ultranationalists” as one of the reasons why Russian troops had to intervene in Ukraine.  What we are seeing in Ukraine right now is eerily reminiscent of what we saw in Nazi Germany before World War II.  The following comes from a recent Gawker article…

Earlier this week, a synagogue in the country’s southeast was firebombed. There have been multiple reported beatings of Jews and acts of vandalism at Kiev synagogues. A leading rabbi in Kiev has called for Jews to leave the city and the country, if possible—though he later said he was stressing that it’s dangerous for everyone out there—and the Israeli embassy has reportedly advised members of the Jewish community to stay off the streets.

Some people are dismissing these as “isolated incidents”.  Well, then how do you explain the white power flags and other neo-Nazi symbols that have been going up all around Kiev?  In the video posted below, you can see a white power flag that has been erected in a city government building in Kiev…

The truth is that it is not a good time to be a Jewish person living in Ukraine.  Just like in so many other nations around the planet, anti-Semitism is on the rise.  The following is from an article about the rising anti-Semitism in Ukraine that comes from a news source in Israel…

“We are aware of a terrible situation unfolding there,” Frenkel noted. She receives updates on the crisis from a friend of her son’s; the contact has described attacks and accusations being leveled at Jews on a regular basis. Among other things, Frankel has been notified that a grenade has been lobbed into a synagogue, a hareidi man assaulted on his way home from synagogue on Shabbat, and anti-Semitic graffiti has cropped up in several places.

Earlier I mentioned the Svoboda Party.  It is one of the primary political parties that make up the new governing coalition in Ukraine.  Unfortunately, this party has historical roots in Nazism and nobody disputes this.

According to Slate Magazine, the Svoboda Party was even called “the Social-National Party” until 2004…

The party traces its roots to a Nazi-allied partisan army during World War II  and was known as the Social-National Party—in reference to National Socialism—until 2004.

And the current leader of the Svoboda Party, Oleh Tyahnybok, is quite a piece of work.  The following is what Stephen Lendman had to say about him…

In 2005, he denounced “criminal activities” of “organized Jewry.” He outrageously claimed they plan “genocide” against Ukrainians.”…

Tyahnybok extremism didn’t deter Assistant Secretary of State for European and Eurasian Affairs Victoria Nuland. On February 6, she met openly with him and other anti-government leaders.

In early January, 15,000 ultranationalists held a torchlight march through Kiev. They did so to honor Nazi-era collaborator/mass murderer Stepan Bandera. Some wore uniforms a Wehrmacht Ukrainian division used in WW II. Others chanted “Ukraine above all” and “Bandera, come and bring order.”

You would think that the U.S. government would want nothing to do with such people.

But instead, the U.S. government has actively aided their rise to power, and now members of the Svoboda Party have been appointed to very important positions throughout the new government in Ukraine…

As the fires die down from the turmoil in Kiev, a political party that has been accused of promoting anti-Semitism and xenophobia is set to reap the benefits of the new government arrangement.

The Svoboda Party will take control of not one, but three ministries in the interim government.

These posts include the deputy prime minister and the heads of the agriculture and environmental ministries. In addition to these positions, a Svoboda lawmaker was appointed the new prosecutor general in the interim government.

If I was a Jewish person living in Ukraine, I would be trying to get out as fast as I could.

Fortunately, there are some people that are seeking to help them.  In fact, they will soon receive a million dollars from one organization to help with security…

Ukrainian Jews are slated to receive $1 million to increase security against possible upticks in anti-Semitic behavior in the wake of the country’s massive political upheaval.

The money is coming from the International Fellowship of Christians and Jews, the Jewish Week reported, and is going toward protection for places where Jews gather, as well as for the elderly and poverty-stricken.

“From the many conversations I’ve conducted this week with Jewish leaders in the Ukraine, we understood that the situation on the ground is critical,” organization founder and president Rabbi Yechiel Eckstein said. “Rabbis and communal leaders feel under threat.”

Hopefully as word gets out about the extreme anti-Semitism of some of these Ukrainian politicians, our politicians in Washington D.C. will start to change their tune.

But we have seen this kind of thing before.  The Obama administration helped al-Qaeda take power in Libya, it is helping al-Qaeda try to overthrow the Syrian government, and now it is helping neo-Nazis rise to power in Ukraine.

It is almost as if a case of collective insanity has gripped the people running things in Washington.

I truly fear for what is ahead.