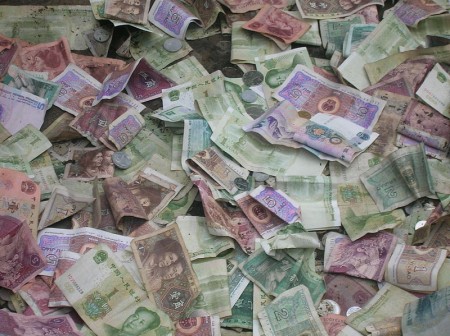 Most Americans have no idea what a tremendous advantage the United States possesses by having the primary reserve currency of the world, and most Americans also have no idea how close the U.S. dollar is to losing that status.  For the past 40 years, the vast majority of all global trade (including the buying and selling of oil) has been done in U.S. dollars.  That is still the case today, but things are starting to shift.  All over the globe international agreements are being made to move away from the U.S. dollar and to use other currencies in global trade.  The second largest economy in the world, China, has been particularly aggressive in seeking to change the existing financial order.  As you will see below, China has been running all over the planet making agreements with other nations to start conducting an increasing amount of trade in currencies other than the U.S. dollar.  And of course the Chinese are heavily promoting their own currency – the renminbi.  So why is this happening?  Well, for one thing, the truth is that the United States is not the only superpower in the world anymore.  The Chinese economy is actually projected to become larger than the U.S. economy by 2016, and by some measurements the Chinese economy is already larger.  So Chinese leaders have been very open about the fact that they believe that it just doesn’t make sense that the vast majority of all global trade should continue to be conducted in U.S. dollars, especially considering the reckless money printing that the Federal Reserve has been doing.  At a time when the status of the U.S. dollar is already slipping, QE3 is deeply undermining confidence in U.S. currency.  And when the U.S. dollar does lose reserve currency status, the consequences for the United States are going to be absolutely catastrophic.

Sadly, most Americans don’t even know what a “reserve currency” is or that the U.S. dollar is under attack.

The Chinese have not only been talking about cutting the legs out from under the U.S. dollar – they have been actively doing it.  The following is an excerpt from a recent story by Alan Wheatley, a global economics correspondent for Reuters….

Fed up with what it sees as Washington’s malign neglect of the dollar, China is busily promoting the cross-border use of its own currency, the yuan, also known as the renminbi, in trade and investment.

The aim is both narrowly commercial – to reduce transaction costs for Chinese exporters and importers – and sweepingly strategic.

Displacing the dollar, Beijing says, will reduce volatility in oil and commodity prices and belatedly erode the ‘exorbitant privilege’ the United States enjoys as the issuer of the reserve currency at the heart of a post-war international financial architecture it now sees as hopelessly outmoded.

The mainstream media in the United States is almost entirely ignoring these developments, but the truth is that all of this is a very, very big deal.

The following are just some of the international currency agreements that China has made in the last couple of years….

Most U.S. economists dismiss this threat by pointing out that China has stockpiled so many U.S. dollars and so much U.S. debt that if anything happens to the U.S. financial system China would be significantly damaged as well.

That may be true to a certain extent, but what is also true is that most Americans fundamentally misunderstand our relationship with China.

Most Americans believe that we are “friends” with China just because they are conducting massive amounts of trade with us.

Sadly, that is not how the Chinese see us.  They see us as “the competition”, and they very much plan on coming out on top in the end.

Right now, the Chinese are stockpiling mind blowing amounts of gold.  They are preparing for the day when the U.S. dollar crashes and when hard assets will be the place to be.

And some are even speculating that the Chinese may be planning to back their own currency with gold at some point.

The following is an excerpt from a recent article by Christopher K. Potter, the president of Northern Border Capital Management….

For three thousand years China has been at the forefront of monetary innovation.  It was the first to legalize gold money in the tenth century BC and two millennia later it issued the world’s first paper currency.  Fast forward to 2012 and China is at it again, eclipsing Australia as the largest producer of gold and increasing its monetary gold reserves at an alarming rate.  Five years ago China surpassed the US in gold production and five years from now it will own more gold than the US Federal government.

Do not dismiss this as just another example of China’s insatiable appetite for natural resources.  It is not.  China is preparing for a world beyond the inconvertible paper dollar, a world in which the renminbi, buttressed by gold, becomes the dominant reserve currency.

Lest anyone doubt China’s resolve, just consider the following:  The Chinese government has recently removed all restrictions on personal ownership of gold; legalized domestic gold exchange traded funds; is currently purchasing 100% of domestic gold mine production; has imported over 750 tons of gold (27% of global output) in the last 12 months; stated publically its intention to add 1,000 tons per year to its central bank gold reserves; and is buying major stakes in foreign gold mining companies.  The scale of this initiative is extraordinary.

When the U.S. financial system crashes, what do you think the rest of the world is going to want – paper U.S. currency that is rapidly becoming worthless or renminbi backed by gold?

And China is gobbling up gold mining operations all over the planet at a staggering rate.  I discussed this extensively in a previous article that you can find here.

Okay, so what happens if the rest of the world starts rejecting the U.S. dollar as a reserve currency and starts moving to other currencies such as the Chinese renminbi?

The change would potentially be dramatic.

Up until now, there has been a constantly growing demand for more dollars from the rest of the globe.  They have needed dollars to buy oil and to trade with one another.

All of this demand has kept the value of the U.S. dollar up.  But if the rest of the globe started rejecting the dollar, it would drop like a rock.

When the value of the dollar declines, imports become more expensive.

So the price of oil would go higher and you would pay more for gasoline at the gas pump.

The era of endless super cheap imports would be over and our standard of living would experience a massive adjustment.

So just how bad could things get?

Well, how would your life change if you went to the store a couple of years from now and the cost of everything was double or triple what it is today?

Yes, I know that sounds dramatic, but a major currency crisis coupled with reckless money printing by the Federal Reserve could actually produce such an outcome.

So enjoy those cheap imports while you still can.  The days of the U.S. dollar being the sole primary reserve currency of the world are numbered, and when the dollar dies it is probably going to happen very rapidly.