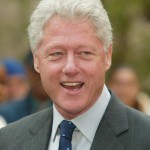 Bill Clinton has discovered a truly unique way of raising money to pay off his wife’s campaign debts. He is raffling off the opportunity to spend a day with him.  Yes, ladies and gentlemen, Bill Clinton is now a lottery prize.

He has sent an email to millions of people who supported Hillary Clinton’s campaign in 2008 that asks this question:

“How would you like the chance to come up to New York and spend the day with me?”

Reportedly, an online donation of as little as $5 gets you into the lottery.

Or maybe this is just a way for Bill to meet chicks.

In any event, the opportunity to spend a day with Bill Clinton is out there.

I wonder what he would do if a hardcore conservative won?

That could be fun.

You could spend half the day just asking him about the truth regarding the scandals during his administration.

Actually, the more I think about it, the more appealing a day with Bill Clinton sounds.

So if the opportunity came up, sure, I think I would hang out with Bill Clinton for a day.

But I would never give Hillary a dime, so I guess I am out of luck.

But if you are interested, feel free to give the Clintons a donation.