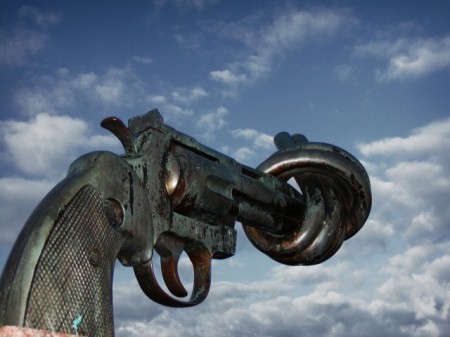 Whenever there is a great crisis or a great tragedy in the United States, the collectivists immediately try to use it for their own political advantage.  As Rahm Emanuel once said, “you never want a serious crisis to go to waste”.  So it should be no surprise that liberals are doing their best to exploit the horrible tragedy that just happened at Sandy Hook Elementary School in Newtown, Connecticut.  20 small children and 6 adults were savagely murdered, and instead of appropriately mourning this great loss, liberals are in a feeding frenzy and are falling all over one another as they rush to exploit this horrible tragedy for political gain.  Some of the most horrible things that you can imagine are being said about gun owners and about the NRA.  They are being called murderers, terrorists and “the new KKK”.  Some are even suggesting that they should be shot or rounded up and put into camps.  It is absolutely disgusting to watch what is going on, and the mainstream media is just eating all of this up.  The mainstream media loves any story that they can use to demonize those that are opposed to the collectivist agenda.

Fortunately, the rampant demonization of gun owners is only having a limited impact on the poll numbers.  One new survey taken after the shooting at Sandy Hook Elementary School has found that 71 percent of all Americans are against banning handguns entirely.  So hopefully we won’t see our politicians try to ban all gun ownership any time soon.

But they are definitely going to come after “assault weapons” early next year.  Some members of Congress have already indicated that they plan to introduce new gun control legislation in January.

Meanwhile, we can expect the demonization of gun owners and the NRA to continue.  The following are a few of the crazy things that have been said by gun grabbers in recent days…

“After the shooter Adam Lanza, no one is more to blame for the massacre of 20 first graders and six women at the Sandy Hook Elementary School than the National Rifle Association”

“You know, I did not go as far as I’d like to go because my thoughts on the NRA and America’s gun culture – I believe the NRA is the new KKK. And that the arming of so many black youths, uh, and loading up our community with drugs, and then just having an open shooting gallery, is the work of people who obviously don’t have our best interests [at heart].”

“And then I guess my final point would be, I think if we’re going to control guns, we really have to do it massive.

I think I’m all for getting rid of the assault weapons and machine guns and all that tough, but if we want to prevent something like this, we have to really think seriously about drastically reducing the number of guns in our society, and particularly — this is an old Patrick Daniel Moynihan idea — the number of bullets. It is very hard to control 300 million guns. The bullets are a little easier to control.”

“…it’s the confiscation of these types of weapons that counts and will have an impact.”

The things that people are saying on Twitter are even worse…

–@fullofbalogna: “The NRA & gun manufacturers are terrorist organizations. We need to eliminate them. Why do RWers support terrorists & murder of kids?”

–Ryan: “The NRA is nothing more than an enabler of mass murder, a terrible organisation that has children’s blood on their hands. Wake up USA.”

–John Cobarruvias: “Can we now shoot the #NRA and everyone who defends them?”

–Stacy Fernandes: “all NRA members need to be rounded up and put in camps where they cant hurt anyone else”

But it is not just gun owners that are being demonized by the mainstream media.  Over the past couple of days there has also been an attempt to portray the mother of Adam Lanza as a deluded prepper that had been preparing “for the end of the world”.  The following quotes from mainstream sources come from a recent article by Daisy Luther…

Before this crisis I wrote an article entitled “Why Are Preppers Hated So Much?“, and in that article I detailed how preppers and survivalists are increasingly being demonized by the media.

Well, now it is getting a whole lot worse.

As I wrote about the other day, political correctness has taken over America, and the mainstream media is systematically demonizing any group that will not go along with the program.

Sadly, the truth is that if just one teacher or one principal at Sandy Hook Elementary School had been armed, a whole lot of lives could have been saved.  There have been numerous examples of mass shootings that have been stopped by private citizens with guns.  University of Tennessee law professor Glenn Harlan Reynolds discussed a couple of these in a recent piece for USA Today…

If there’s someone present with a gun when a mass shooting begins, the shooter is likely to be shot himself. And, in fact, many mass shootings — from the high school shooting by Luke Woodham in Pearl, Miss., to the New Life Church shooting in Colorado Springs, Colo., where an armed volunteer shot the attacker — have been terminated when someone retrieved a gun from a car or elsewhere and confronted the shooter.

And time after time we have seen crime go down when gun laws are relaxed.  Criminals are much less likely to try something when they know that their targets are likely to be armed.

Here are some more statistics about guns and crime from foxandhoundsdaily.com…

* Guns are used 2.5 million times annually or 6,860 times a day. This means that each year, firearms are used more than 80 times more often to protect the lives of honest citizens than they are to take lives.

* Less than 8 percent of the time, a citizen will kill or wound his/her attacker.

* 200,000 women use a gun every year to defend themselves against sexual abuse

* Citizens shoot and kill at least twice as many criminals as police do every year.

* Only 2 percent of civilian shootings involved an innocent person mistakenly identified as a criminal. The ‘error rate’ for the police, however, was 11 percent, more than five times as high.

Sadly, the collectivists seem absolutely determined to use the tragedy at Sandy Hook Elementary School to unleash a new era of strict gun control laws.

So if you wanted to get a gun to protect your home and your family, you might want to do it now.  The witch hunt has begun, and it will soon become much more difficult to exercise your 2nd Amendment rights.