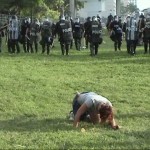 The following list was compiled by “Major Carpenter”, a great friend of the site. I think that you will really enjoy what he has put together. The truth is that the United States is in a serious state of decline, and in a desperate attempt to keep things together, the United States is rapidly being transformed into a totalitarian Big Brother police state. I don’t want to make this introduction too long, so without any further yapping by me, here is the article that Major Carpenter sent over to us the other day…..

I’ve compiled this list of horrors (in no particular order) from two prior lists, one done by U.S. author Naomi Wolf and another by UK writer Dr. Lawrence Britt, as published in the Guardian newspaper.

Sadly, I count all seventeen as aspects of the Untied Status of Amerika today. AKA the “BRA” (Banana Republik of Amerika).

Again, what do WE the PEOPLE do about it?

How many of these do you see as part of a once great country?

1. Powerful And Continuing Nationalism – Fascist regimes tend to make constant use of patriotic mottos, slogans, symbols, songs, and other paraphernalia. Flags are seen everywhere, as are flag symbols on clothing and in public displays.

2. Disdain For The Recognition Of Human Rights – Because of fear of enemies and the need for security, the people in fascist regimes are persuaded that human rights can be ignored in certain cases because of “need.” The people tend to look the other way or even approve of torture, summary executions, assassinations, long incarcerations of prisoners, etc.

4. Supremacy Of The Military – Even when there are widespread domestic problems, the military is given a disproportionate amount of government funding, and the domestic agenda is neglected. Soldiers and military service are glamorized.

6. Obsession With National Security – Fear is used as a motivational tool by the government over the masses.

7. Corporate and Government Power Are Intertwined And Their Combined Power Is Protected – The industrial and business aristocracy of a fascist nation often are the ones who put the government leaders into power, creating a mutually beneficial business/government relationship and power elite. (This is the actual definition of fascism according to Gerald Celente’s historical description of Mussolini’s opinion on the matter).

8. Obsession With Crime And Punishment – Under fascist regimes, the police are given almost limitless power to enforce laws. The people are often willing to overlook police abuses and even forego civil liberties in the name of patriotism. There is often a national police force with virtually unlimited power in fascist nations.

9. Rampant Cronyism And Corruption – Fascist regimes almost always are governed by groups of friends and associates who appoint each other to government positions and use governmental power and authority to protect their friends from accountability. It is not uncommon in fascist regimes for national resources and even treasures to be appropriated or even outright stolen by government leaders. (Gee how about several TRILLION DOLLARS printed out of nothing and handed over to U.S. and foreign banks and companies – does that maybe count? How about hundreds of thousands of people’s homes? How many politicians leave Washington D.C. millionaires or billionaires after arriving there with next to nothing?)

10. Fraudulent Elections – Sometimes elections in fascist nations are a complete sham. Other times elections are manipulated by smear campaigns against or even assassination of opposition candidates, use of legislation to control voting numbers or political district boundaries, and manipulation of the media. Fascist nations also typically use their judiciaries to manipulate or control elections.

11. Dissent Equals Treason – Cast dissent as “treason” and criticism as “espionage”. Every closing society does this, just as it elaborates laws that increasingly criminalize certain kinds of speech (see also #17) and expand the definition of “spy” and “traitor”.

12. Create A Gulag – Once you have got everyone scared, the next step is to create a prison system outside the rule of law – where torture takes place. Gulags in history tend to become ever larger and more secretive, ever more deadly and formalized. Most Americans don’t understand yet that the destruction of the rule of law at Guantánamo set a dangerous precedent for them, too.

13. Deny Prisoners Due Process – Prisoners held indefinitely, often in isolation, and tortured, without being charged with offenses, and subjected to show trials.

14. Militarize The Police – When leaders who seek what I call a “fascist shift” want to close down an open society, they send paramilitary groups of scary young men out to terrorize citizens: (the powers that be) need citizens to fear thug violence and need thugs who are free from prosecution.

15 . Set Up An Internal Surveillance System And Harass Citizens – In Mussolini’s Italy, in Nazi Germany, in communist East Germany, in communist China – in every closed society – secret police spy on ordinary people and encourage neighbours to spy on neighbors. The Stasi needed to keep only a minority of East Germans under surveillance to convince a majority that they themselves were being watched. In 2005 and 2006, when James Risen and Eric Lichtblau wrote in the New York Times about a secret state program to wiretap citizens’ phones, read their emails and follow international financial transactions, it became clear to ordinary Americans that they, too, could be under state scrutiny. In closed societies, this surveillance is cast as being about “national security”; the true function is to keep citizens docile and inhibit their activism and dissent.

16. Harass Citizens’ Groups – Next step is to infiltrate and harass citizens’ groups. The American Civil Liberties Union reports that thousands of ordinary American anti-war, environmental and other groups have been infiltrated by agents. The secret Counterintelligence Field Activity (Cifa) agency of the Department of Defense has been gathering information about domestic organizations engaged in peaceful political activities: Cifa is supposed to track “potential terrorist threats” as it watches ordinary U.S. citizen activists. A little-noticed new law has redefined activism such as animal rights protests as “terrorism”. So the definition of “terrorist” slowly expands to include the opposition.

17. Rampant Sexual Harassment – The state is represented as the ultimate guardian of the family institution. (Sexual harassment by the state against the people takes place in order to demotivate opposition and destroy morale; the recent TSA activities are nothing more than a power play to ensure that the people know they are nothing more than slabs of meat to the powers that be – who are of course, exempted from being sexually harassed. Furthermore, the state decides what is sexually “appropriate” and enforces it’s opinion over the objections of the moralities of the nation and a majority of people who believe in them (i.e. homosexuality, abortion, pre-marital sex, etc.) are promoted as “normal” and any – pardon me – ‘deviation’ from that opinion is made out to be “hateful” and nearly criminal, with consequences including the denial of rights, property and even children being removed from parents if the parents do not hold the “politically correct” ideologies.