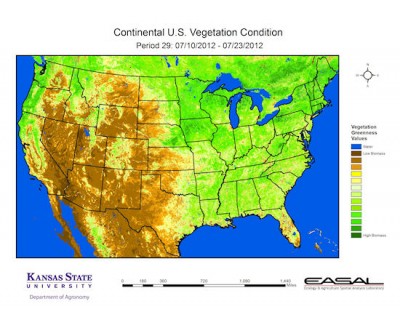 A nightmarish global food crisis is coming.  Even though about a billion people around the planet currently live on the edge of starvation, those of us that live in the wealthy western nations still have more than enough food to eat.  But it will not always be that way.  With each passing year, the global population goes up while global supplies of fresh water go down.  And you need lots of water to grow food.  The “breadbaskets” of the world, the United States and Russia, are currently experiencing horrible droughts that scientists tell us are part of a long-term trend.  In fact, some are projecting that the United States will soon see the return of Dust Bowl conditions.  So what will the rest of the world do when the topsoil in the heartland of the biggest food exporter on the globe dries up and blows away?  Just remember what happened back in 2007 and 2008.  Food prices rose rapidly and it sparked massive food riots in more than two dozen different nations.  So what will things look like when there is a very serious shortage of food around the globe?

On Thursday, the price of corn hit another brand new record high of $8.28 a bushel on the Chicago Board of Trade.

Unfortunately, the price of corn is likely to go a lot higher because this drought never seems to end.

We just came out of the hottest July ever recorded, and the drought just continues to intensify.

At this point, more than 78 percent of the entire country (excluding Alaska and Hawaii) is experiencing at least some level of drought.

24 percent of the nation is experiencing “extreme” or “exceptional drought”.  That number has risen by two percent in just the last week alone.

So what happens if we have another drought like this next year?

Yes, prices will rise as we burn through our reserves.

If things get bad enough, eventually the U.S. will cut back on ethanol production.

But there is not going to be starvation in the United States this year.

In other areas of the world, however, people are starving.

Just check out what is happening in Yemen.

And if drought conditions persist in the United States and Russia things are going to get a lot worse.  The following is from a recent Reuters article….

The world could face a food crisis of the kind seen in 2007/08 if countries restrict exports on concerns about a drought-fuelled grain price rally, the UN’s food agency warned on Thursday, after reporting a surge in global food prices in July.

Oxfam spokesperson Colin Roche had the following to say after the latest global food price numbers were released….

“These new figures prove that the world’s food system cannot cope on crumbling foundations. The combination of rising prices and expected low reserves means the world is facing a double danger.”

So what happens if global reserves are wiped out by the drought this year, and next year we see an even worse drought?

Most people simply have no idea how incredibly vulnerable the global food system is.

The following are 17 signs that you had better start preparing for a nightmarish global food crisis….

#1 The United States exports more corn, soybeans and wheat than anyone else in the world by far.  If Dust Bowl conditions return to the United States, there may not be any food to export in future years.

#3 The American Restaurant Association is projecting that the price of corn could surpass the $9.50 mark by the end of the year.

#4 Right now, approximately half of all corn being grown in the United States is either in “poor” or “very poor” condition.

#5 2012 will be the third year in a row that the yield for corn will decline in the United States.  That has never happened before in American history.

#7 The U.N. index of cereal prices rose by 17 percent during July.

#8 The global price of sugar increased by 12 percent during July.  That price increase had nothing to do with the drought in the United States.

#9 In July, the FAO global food index increased by the most that we have seen in a single month since 2009.

#10 As I have written about previously, millions of fish are dying in rivers and lakes all over the United States due to the heat and the drought.

#12 In many countries around the globe, the poor already spend up to 75 percent of their incomes on food.  Even a 10 percent rise in the price of food is enough to send many families over the edge.

#13 Approximately 1 billion people around the world go to bed hungry every single night.  So what will that number be if we have a major global food crisis?

#14 Somewhere in the world someone starves to death every 3.6 seconds, and 75 percent of those are children under the age of five.

#16 Sadly, the drought that we are facing this year is just part of a longer term trend.  In fact, one team of scientists recently published a study that postulated that the western United States could be facing a “100-year drought“.

#17 Some scientists are already projecting that it is already too late to avoid serious damage to crops next year.  According to a recent article in the Guardian, some believe that the drought in the U.S. has been so nightmarish this year that it is going to take a “freak event” to avoid catastrophic damage to next year’s corn crops….

What matters now is whether there will be enough rain to get next year’s crops off to a good start.

“This drought isn’t going anywhere,” he said. “The damage is already done. What you are looking for is enough moisture to avert a second year of drought,” he said.

However, Svoboda conceded that might require a freak event, especially in the mid-west which has already passed its rain season. “In the entire corn belt, from Indiana to Nebraska to the Dakotas, we have already reached the maximum precipitation periods for year. From here on in, it’s all downhill,” Svoboda said.

“As far as widespread general relief for the whole region it would take a really freakish dramatic change to make that happen. That doesn’t appear to be in the cards, given the time of year we are in.”

This drought is unlike anything the United States has seen since the Dust Bowl days of the 1930s.

This is particularly true for the western half of the nation.  The following is an extended excerpt from an absolutely outstanding article that was posted on preparednesspro.com….

A white paper I was reading recently showed Mexico as importing 80%+ of our vegetable produce. Now look at the map and see how Mexico is faring with this drought and intense heat. Needless to say this means even higher markups on our fresh foods as well. How about California? It provides over half or our fruit and nut harvests. Look at how they are faring on the Vegetation Condition map! In previous years over 48% of our corn crops went directly to the fuel industry along with another 10% going towards other corn products (some of which you’d never dream were influenced by the corn market). So in a drought condition like this, what little will there be left for our actual food needs?

Mexico is our biggest supplier of vegetables, only sharing a 2 to 1 portion of the lime light with Canada, though China does take a distant third (in dollar values, not pounds) In the fruit category, most of it comes from Central and South America, with only China (4th) to break up the Top 6 of Mexico, Chile, Costa Rica, Guatemala, and Ecuador. Hmmm…have you had a chance to see if there’s a drought problem in those countries too?  Yup, there are.

Did you know that nearly three fourths of our meat supplies come from the worst hit drought stricken areas?? Ouch! And we thought the high price of corn was going to kick  beef prices sky high? Imagine what will happen when they can’t get ANY food for their cattle.

Hopefully we will get some relief from this drought.

But what if that does not happen?

If you have not been preparing, you might want to get started.