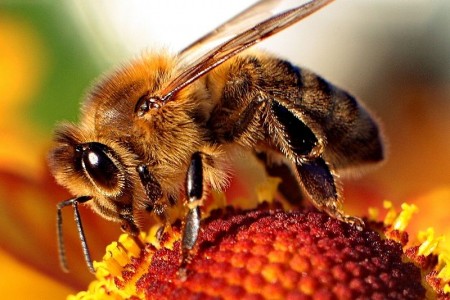 If bees keep dying off at this rate, we are going to be facing a horrific agricultural crisis very rapidly in the United States.  Last winter, 31 percent of all U.S. bee colonies were wiped out.  The year before that it was 21 percent.  These colony losses are being described as “catastrophic” by those in the industry, and nobody is quite sure how to fix the problem.  Some are blaming the bee deaths on pesticides, others are blaming parasites and others are blaming cell phones.  But no matter what is causing these deaths, if it doesn’t stop we will all soon notice the effects at the supermarket.  Bees pollinate about a hundred different crops in the United States, and if the bees disappear nobody is quite sure how we will be able to continue to grow many of those crops.  This emerging crisis does not get a lot of attention from the mainstream media, but if we continue to lose 30 percent of our bees every year it is going to have a cataclysmic effect on our food supply.

This past winter was one of the worst on record for bees. In the U.S., beekeepers lost 31 percent of their colonies, compared to a loss of 21 percent the previous winter. In Canada, the Canadian Honey Council reports an annual loss of 35 percent of honey bee colonies in the last three years. In Britain, the Bee Farmers’ Association says its members lost roughly half their colonies over the winter.

“It has been absolutely catastrophic,” said Margaret Ginman, who is general secretary of the Bee Farmers’ Association. “This has been one of the worst years in living memory.”

Scientists have been scrambling to figure out what is causing this, and one study that was recently conducted by researchers at the University of Maryland and the U.S. Department of Agriculture may have some answers…

The study, published July 24 in the online journal PLOS ONE, is the first analysis of real-world conditions encountered by honey bees as their hives pollinate a wide range of crops, from apples to watermelons.

The researchers collected pollen from honey bee hives in fields from Delaware to Maine. They analyzed the samples to find out which flowering plants were the bees’ main pollen sources and what agricultural chemicals were commingled with the pollen. The researchers fed the pesticide-laden pollen samples to healthy bees, which were then tested for their ability to resist infection with Nosema ceranae – a parasite of adult honey bees that has been linked to a lethal phenomenon known as colony collapse disorder.

On average, the pollen samples contained 9 different agricultural chemicals, including fungicides, insecticides, herbicides and miticides. Sublethal levels of multiple agricultural chemicals were present in every sample, with one sample containing 21 different pesticides. Pesticides found most frequently in the bees’ pollen were the fungicide chlorothalonil, used on apples and other crops, and the insecticide fluvalinate, used by beekeepers to control Varroa mites, common honey bee pests.

The particular parasite mentioned above, Nosema ceranae, is extremely destructive to honeybees, and this study found that some pesticides and fungicides make it much more likely that bees will become infected by these parasites…

When researchers collected pollen from hives on the east coast pollinating cranberry, watermelon and other crops and fed it to healthy bees, those bees showed a significant decline in their ability to resist infection by a parasite called Nosema ceranae. The parasite has been implicated in Colony Collapse Disorder though scientists took pains to point out that their findings do not directly link the pesticides to CCD. The pollen was contaminated on average with nine different pesticides and fungicides though scientists discovered 21 agricultural chemicals in one sample. Scientists identified eight ag chemicals associated with increased risk of infection by the parasite.

Most disturbing, bees that ate pollen contaminated with fungicides were three times as likely to be infected by the parasite. Widely used, fungicides had been thought to be harmless for bees as they’re designed to kill fungus, not insects, on crops like apples.

“There’s growing evidence that fungicides may be affecting the bees on their own and I think what it highlights is a need to reassess how we label these agricultural chemicals,” Dennis vanEngelsdorp, the study’s lead author, told Quartz.

So are these pesticides and fungicides the cause of Colony Collapse disorder?

The authors of the study stated very clearly that they were not making that conclusion.

But it does seem more than coincidental that continental Europe is not seeing bees die in the same kinds of numbers and they have banned many of these pesticides and fungicides.  The following is from a recent article by Christina Sarich…

A study by the European Food Safety Authority (EFSA) has labeled one pesticide, called clothianidin, as completely unacceptable for use, and banned it from use entirely. Meanwhile, the U.S. uses the same pesticide on more than a third of its crops – nearly 143 million acres. Two more pesticides linked to bee death are imidacloprid, and thiamethoxam. These are also used extensively in the US, while elsewhere, they have been taken out of circulation.

No matter what the true cause is, we need to find a solution quickly because if we start running out of honey bees we will rapidly be facing a nightmarish agricultural apocalypse.

Can you imagine life without those foods?

But if bees keep dying off like this, first those crops will start becoming extremely expensive and then they will start disappearing from our store shelves altogether.