If a major economic crisis hit us right now, the vast majority of Americans would be extremely vulnerable.  According to a recent CareerBuilder survey, 40 percent of all Americans live paycheck to paycheck all of the time, and 77 percent of all Americans live paycheck to paycheck at least part of the time.  This is why there was such a problem with foreclosures during the last recession.  When millions of Americans suddenly lost their jobs many of them quickly found that they were unable to pay their mortgages because they had no financial cushions.  For decades, Americans have been trained that it is okay to get into debt up to their eyeballs and live paycheck to paycheck because times will always be good and jobs will always be easy to get.  Unfortunately, times have changed and many Americans do not realize that what has worked in the past is not going to work any longer.  Our economy is completely and totally falling apart, and economic success is no longer defined by whoever is able to accumulate the most toys.  In this economic environment you could lose your job at literally any moment.  Anyone that does not have a sizable emergency fund is flirting with disaster.

So how did we get here?

Why are 77 percent of all Americans living paycheck to paycheck at least part of the time?

Well, the truth is that the U.S. economy simply does not produce enough jobs anymore.

Everyone that wants a job is not going to be able to have one.

Many were hoping that once the last recession ended that we would see a huge rebound in the employment numbers but that has not happened.

In fact, the percentage of working age Americans that have a job is actually lower now than it was at the end of the last recession…. 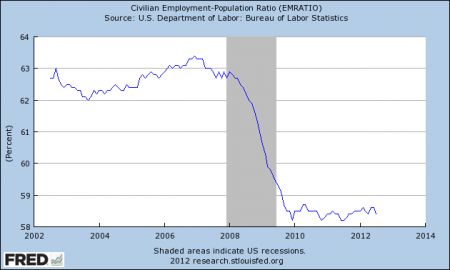 There are lots of reasons why this is happening.  One of them, of course, is that millions of jobs are being shipped out of the country.  When you consider how fast our jobs are being outsourced, it is actually a miracle that things in this country are not even worse.

When you total up all working age Americans that do not have a job in America today, it comes to more than 100 million.  Yes, many of them are parents that want to stay home with the kids or students that are enrolled in college, but still that is an absolutely staggering number.

And even the official unemployment numbers are starting to look quite gloomy again.

For example, the unemployment rate in New Jersey has risen to 9.8 percent, which is already higher than it was at any point during the last recession.

And if you do lose your job in this economic environment, it may be a long time before you are able to get another.  Today, the average duration of unemployment in the United States is nearly three times as long as it was back in the year 2000.

The Quality Of Our Jobs Is Declining

Not only is our economy not producing enough jobs for all of us, the quality of the jobs that are being produced continues to steadily decline.

At this point, only 24.6 percent of all jobs in the United States are good jobs.

That is a shocking figure.

The number of low paying jobs continues to increase, fewer jobs are offering health insurance and other benefits, and very few private sector jobs offer retirement benefits at this point.

In America today, one out of every four workers makes ten dollars an hour or less.

But you can’t support a family on 10 dollars an hour.

You can’t even come close.

Sadly, these low paying jobs continue to become a larger part of our economy.

30 years ago, less than 30% of all jobs in the United States were low income jobs.

Today, more than 40% of all jobs in the United States are low income jobs.

That is the wrong direction.

And those just entering the workforce are being hurt the worst.

As I wrote about a while back, approximately 53 percent of all U.S. college graduates under the age of 25 were either unemployed or underemployed last year.

As the quality of the jobs goes down, so does the wealth of average American families.

Back in 2007, 19.2 percent of all American families had a net worth of zero or less than zero.

And when you look at median net worth, it also tells a story of declining wealth for American families.

Needless to say, the middle class in America is being shredded.

Millions are dropping out of the middle class every single year.

So what is happening to them?

Well, they are joining the ranks of the poor and are becoming dependent on the government.

If you can believe it, right now more than 100 million Americans are enrolled in at least one welfare program run by the federal government.

Yes, that is actually true.

And those are just 2 of the almost 80 different “means-tested welfare programs” that the federal government runs.

It turns out that most Americans don’t like to be poor.

In fact, most Americans are desperately wanting things to go back to the way they used to be in this country.

The American people are steaming mad right now, and a whole host of recent polls and surveys have shown this.

For example, at this point Congress only has a 10 percent approval rating.  That matches an all-time low set earlier this year.

That is a crazy number.

And most Americans expect the economy to continue to decline.  According to a recent Gallup survey, 61 percent of all Americans believe that the U.S. economy is getting even worse.

But what can the U.S. government do?

It is already spending more than a trillion dollars more than it brings in.

We are stealing billions of dollars from our children and our grandchildren every single day and yet that is still not enough to get our economy going again.

We are now basically 16 trillion dollars in debt, and our debt is now more than 37 times larger than it was when Nixon took us off the gold standard.

We desperately need to change course, but neither major political party has any intention of doing that.

So we are headed for disaster.

The following is what renowned investor Jim Rogers had to say during a recent interview….

As far as I’m concerned, the election is irrelevant. One [candidate] happens to be from Boston and one from Chicago, and whoever wins, their friends are going to do well, but other than that America is not going to do well. There’s very little difference in any of these guys. None of them understands the problem. These are the guys that got us into trouble. You expect them to get us out?

And he is right.

We are living in the greatest debt bubble in the history of the world and we are suffering from a complete and total lack of leadership at the top.

Recently, a team of top economists and analysts carefully studied the global economic system, and what this team of experts discovered is quite chilling….

And according to these experts – who have presented their findings to the United Nations, the UK Parliament and a long list of world governments – the catastrophe may happen well before Americans hit the polls in November.

“What this pattern represents is a dangerous countdown clock that’s quickly approaching zero,” said Keith Fitz-Gerald, the Chief Investment Strategist for the Money Map Press, who predicted the 2008 oil shock, the credit default swap crisis that helped bring about the recession, and the Greek and European fiscal catastrophe that is still wreaking havoc until this day.

“The resulting chaos is going to crush Americans.”

Other members of the team were extremely alarmed by what was discovered as well….

Another member of this team, Chris Martenson, a global economic trend forecaster, former VP of a Fortune 300, and an internationally recognized expert on the dangers of exponential growth in the economy, explained their findings further:

“We found an identical pattern in our debt, total credit market, and money supply that guarantees they’re going to fail,” Martenson said. “This pattern is nearly the same as in any pyramid scheme, one that escalates exponentially fast before it collapses. Governments around the globe are chiefly responsible.”

“And what’s really disturbing about these findings is that the pattern isn’t limited to our economy. We found the same catastrophic pattern in our energy, food, and water systems as well.”

Most Americans do not realize this, but we are heading for an economic disaster of unprecedented proportions.

Get ready while you still can, because time is running out.