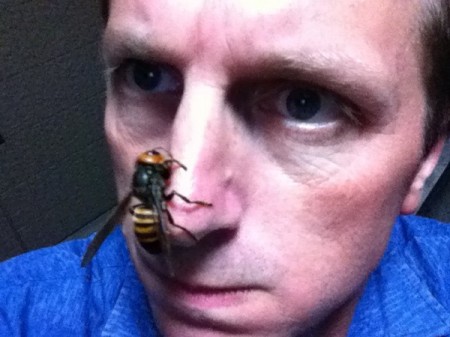 The photo of an Asian giant hornet posted above was taken by blogger Kurt Bell, and as you can see, these Asian giant hornets are freakishly huge.  They are also extremely aggressive and they are not afraid to attack people at all.  And as you will read about below, getting stung by one of them is exceedingly painful.  If they only attacked humans once in a while, it wouldn’t be that big of a deal.  Unfortunately, Asian giant hornets appear to be multiplying rapidly and they have killed dozens of people in China in recent months.  But most Americans are not going to get too concerned about a plague of giant hornets on the other side of the planet.  Well, what if I told you that Asian giant hornets are now spreading like wildfire in this country and attacking people all over the United States?  Would I have your attention then?  Because that is precisely what is happening.

The recent giant hornet attacks in China have made headlines all over the globe.  For example, the following is an excerpt from a recent article in the Guardian…

Twenty-eight people have died and hundreds have been injured in a wave of attacks by giant hornets in central China, according to reports.

Victims described being chased for hundreds of meters by the creatures and stung as many as 200 times.

And when you get stung by one of these giant hornets, it is immensely painful and it can dissolve your skin…

Being stung feels “like a hot nail through my leg,” as one entomologist put it, and their venom can dissolve skin. They’re fast, too, flying up to 25 miles per hour (41 kilometers an hour). They’re also the largest hornets on the planet, reaching 5.5 centimeters (2.2 inches).

You can’t outrun these hornets and they are unbelievably vicious.  Just check out what they do to other bees…

The Asian giant hornet is the world’s largest hornet, and is a voracious predator that dines on mantises, bees and other large insects. It has a deservedly evil reputation for wiping out entire hives containing thousands of honeybees by biting off the bees’ heads and then stealing their honey and bee larvae. The hornets are capable of flying up to 62 miles (100 kilometers) in a single day at speeds of 25 mph (40 km/h).

Asian giant hornets are five times larger than regular honey bees, and they have absolutely huge jaws.  They work incredibly quickly and they can kill up to 40 honey bees in a single minute.

Perhaps this is one of the factors that is contributing to the massive decline in the honey bee population around the globe.

But much more frightening is what these giant hornets are now doing to humans.  Just check out the following example from a recent Quartz article…

Here’s a chilling scene that Chen Changlin, an Ankang farmer, witnessed one evening a few days ago. As he harvested rice on evening, hornets swarmed a woman and child working nearby. When they reached Chen, they stung him for three minutes straight. Chen made it; the other two died. “The more you run, the more they want to chase you,” said another victim, whose kidneys were ravaged by the venom. When he was admitted to the hospital, his urine was the color of soy sauce.

Of course these giant predators no longer reside just in Asia.  Thanks to “free trade”, they are now also in Europe…

That’s why bee populations in France, where Chinese hornets arrived via a Chinese pottery shipment in 2005, have already taken a hit. Since then, Chinese hornets have spread at a pace of up to 100 km (62 miles) a year. Within the last three years, they’ve invaded Spain, Portugal and Belgium; soon they’ll arrive in Italy and the UK, says the European Environment Agency.

And even though most Americans don’t realize this, they are also spreading all over the United States as well.

According to one very disturbing news report, there have been recent sightings of Asian giant hornets all over the United States…

A forum on DSLReports.com Need to kill Asian Hornets and comments on a BadSpiderBites.com Giant Hornet article includes reports of Asian Giant Hornets in Alabama, California, Georgia, Illinois, Indiana, Iowa, Kentucky, Louisiana, New Hampshire, New Jersey, New York, North Carolina, Ohio, Oklahoma, Pennsylvania, Tennessee, Texas, Vermont, Virginia, and West Virginia. One of the pictures from a contributor from Tennessee shows a European Hornet. Last Fall posters reported aggressive infestations in recent years. In Georgia a poster reports he doesn’t go a day without seeing one of the giant hornets. One poster reports the insects flying into lights at night, and an infestation in a chimney with about 200 hornets getting inside the house. Many posters scoff at the comments that the insects aren’t aggressive. Some posters report that the large hornets are not affected by wasp/hornet spray.

Over time, Asian giant hornets will greatly multiply in this country and will be found almost everywhere.

So not only are millions of Americans losing their good paying jobs to “free trade”, we are also getting the added bonus of an endless plague of human-killing giant hornets.

These giant hornets don’t just attack little kids and elderly people.  They will even attack full grown men.  For example, just check out what happened to one man in Virginia…

I live in Richmond Virginia, & my parents live in King William Virginia. One day while visiting my folks, I was standing in their yard, talking to my mother with my arms crossed, when I heard what sounded like a rc airplane in a full on nosedive. I looked up just in time to see a humming bird sized hornet, identical to the picture of the Asian giant hornet, coming straight at me. It stung me on top of my ear & I have NEVER experienced such pain in my life, before, or since. The pain lasted for hours.

I am pierced & tattood all over, none of them hurt. This hurt. I cursed & cried like a little baby right in front of my mother. I am not allergic to bee or wasp stings, yet my entire face swelled up to extremely scary proportions. I have seen European hornets & cicada killers before. Nope, not it. Plus this thing was huge, & quite obviously, extremely aggressive, since I was doing NOTHING. Standing in the yard with my arms crossed. Not messing with a nest, not cutting grass, not doing jack. I have easily seen a dozen since that incident, & NO ONE will convince me they are not here. Yes it gets hot in VA, but NEVER over 100-105 degrees, so try again with the “It gets too hot here” B.S.. They ARE here.

Yes, they are here and now there is even a Facebook group dedicated to sharing spottings of Asian giant hornets in the United States.

What will you do when these vicious predators decide to take up residence in your neighborhood?