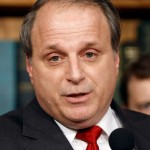 What in the world has happened to our once great republic?  The U.S. Congress has been turned into a festival of legalized bribery.  We all know that at least on some level, but when Glenn Beck interviewed Eric Massa the other day, what Massa had to say totally stunned many of us.  He told Beck that “you can literally be bought and sold legally” as a member of the U.S. Congress.  He also said that members of Congress spend about 5 hours a day just raising money, and that there are special coaches that are brought in that teach them how to do it better.  How insane is that?

Do yourself a favor and take a couple of minutes and watch the excerpt from the interview posted below.  No matter what your political persuasion is, you have to admit that this is really, really sad….