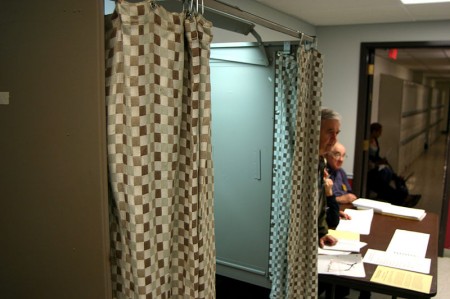 Why is the mainstream media saying nothing about election fraud even though there are eyewitness reports from all over the country of voting machines turning Romney votes into Obama votes? Why do the Republican Party and the Romney campaign seem completely uninterested in widespread reports of voter fraud in important swing states?  The integrity of our votes is of the utmost importance.  If our voting machines are not “working correctly” or if rampant voter fraud is being committed, what are we supposed to do about it?  According to the Election Protection Coalition, American voters reported more than 70,000 voting problems by 5 PM Eastern time on election day.  But it seems as though nobody even follows up on these complaints.  With each election cycle the reports of election fraud just continue to get worse, but once each election is over we never hear about anyone getting into any trouble.  What you are about to read will likely make you very angry.  There are eyewitness accounts of voting machines all over the nation turning Romney votes into Obama votes.  So will anything be done about this?  Of course not.  We are being told to sit down, shut up and blindly have faith in the results that the voting machines are giving us even though there is solid proof that there were very serious problems with the voting machines.

These problems first emerged in a number of swing states during early voting.  In many of the most important swing states it was being reported that Romney voters were claiming that when they tried to cast votes for Romney that the voting machines changed their votes to Obama instead.  The following is one example of this from Ohio…

“I don’t know if it happened to anybody else or not, but this is the first time in all the years that we voted that this has ever happened to me,” said Marion, Ohio, voter Joan Stevens.

Stevens said that when she voted, it took her three tries before the machine accepted her choice to vote for Romney.

“I went to vote and I got right in the middle of Romney’s name,” Stevens told Fox News, saying that she was certain to put her finger directly on her choice for the White House.

She said that the first time she pushed “Romney,” the machine marked “Obama.”

So she pushed Romney again. Obama came up again. Then it happened a third time.

“Maybe you make a mistake once, but not three times,” she told Fox News.

But of course this was not just happening in Ohio.  There were also eyewitness accounts of this happening during early voting in quite a few other states including Nevada, Kansas, North Carolina, Missouri and Colorado.

Officials assured us that the voting machines would be “recalibrated” and that we would not have these kinds of problems on election day.

Unfortunately, it turned out that there were a whole bunch of reports of voting machines turning Romney votes into Obama votes on election day.

For example, an equipment manager who worked for Chicago’s election system on election day says that he repeatedly witnessed voting machines fail to register Romney votes…

Steve Pickrum said he worked for Chicago’s election system during the early voting and Election Day voting for the 2012 race.

As an equipment manager for the system, Pickrum said, he responded whenever there was a glitch with a voting machine.

“On early voting, when I did work on the floor when voters needed help using the equipment, I was able to see the preference of the voter, and every time that I saw [a] voter voted for Romney a ‘voter save failure’ message came up on the screen,’” he reported.

And guess what happened when he went to cast his own vote?  The same thing happened to him…

Then when he went on Election Day to cast his own vote, he picked Romney and experienced the same error message.

Pickrum said he worked at both the Matteson voting area as well as in Precinct 70, and although he discussed the anomalies with his boss, had not yet filed a formal report.

He said when he voted, he was told by a precinct worker to just go ahead and assume that his vote had been tabulated, despite the error message. But since he knew the operations of the machines, he asked the poll workers to check the vote report, and they found his vote had not been counted.

Over in Pennsylvania, a poll watcher claims that “about 5 percent to 10 percent” of the votes were being switched from Romney to Obama by the voting machines in the polling location that he was monitoring.  What he recently told WND is absolutely staggering…

It was in Upper Macungie Township, near Allentown, Pa., where an auditor, Robert Ashcroft, was dispatched by Republicans to monitor the vote on Election Day. He said the software he observed would “change the selection back to default – to Obama.”

He said that happened in about 5 percent to 10 percent of the votes.

He said the changes appeared to have been made by a software program.

Ashcroft said the format for computer programming has a default status, and in this case it appeared to be designating a vote for Obama each time it went to default.

But issues with the voting machines were not the only problems that poll watchers were observing on election day.

Down at one polling location in the swing state of Virginia, a poll watcher named Dara Fox says that voter fraud was “rampant”.

-That it appeared that voters for Obama were being bussed in.

-That many of them could not speak English at all.

-That many of them could not tell poll workers the correct address on their identification cards.

-That many of them were obviously far from the correct age.

-That many people were voting more than once at that same polling station throughout the day.

The following is a YouTube video of Dara Fox being interviewed by WMAL.  Was there an organized effort to steal the vote in Virginia?…

According to the head of the Republican Party of Maine, a similar thing appeared to have happened in his state…

The head of the Maine Republican Party claims that “hundreds” of unfamiliar black voters may have cast fraudulent ballots in his state on Election Day.

“In some parts of rural Maine, there were dozens, dozens of black people who came in and voted on Election Day,” Charlie Webster told Portland’s NBC affiliate WCSH-TV on Wednesday.

“Everybody has a right to vote, but nobody in town knows anyone who’s black,” Webster said. “How did that happen? I don’t know. We’re going to find out.”

If anyone out there has heard of any other reports such as these, please let me know.

If we do not speak up, nothing will be done.

The Democrats aren’t going to do anything about this.

The Republicans aren’t going to do anything about this.

The mainstream media is not going to do anything about this.

As far as they are all concerned, we are not supposed to question the results.  We are just supposed to have blind faith in the system even though there is a mountain of evidence right in front of our eyes that is screaming that something is wrong.

So what do you think about all of this?  Please feel free to post a comment with your thoughts below…