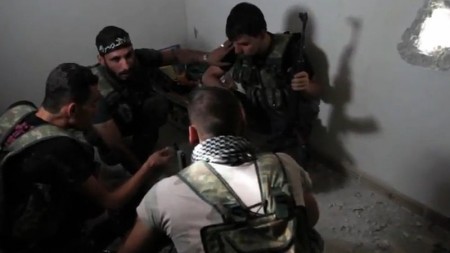 Do the Syrian rebels plan to attack Israel with chemical weapons in order to provoke Israel into a war with the Assad regime?  Now that it looks like the United States has been backed into a corner by Russia, it seems unlikely that the U.S. military will strike Syria in the immediate future and the Syrian rebels (and their backers in Saudi Arabia and Qatar) are extremely disappointed by this.  The entire purpose for the false flag sarin gas attack that took place back in August was to draw the United States military into the conflict.  Without U.S. intervention, the rebels have very little hope of overthrowing Assad and setting up the hardcore Sunni government that they desire.  So the rebels need another plan and they need one quickly.  Unfortunately, according to international news reports it looks like “Plan B” for the rebels may be to hit Israel with chemical weapons and blame it on Assad.  Of course the rebels absolutely hate Israel, but if they can get Israel to destroy the Assad regime they will be very happy about that.

A chemical attack may be launched on Israel by Syrian rebels from government-controlled territories as a “major provocation,” multiple sources told RT.

Jewish news source ynetnews.com has also posted a story about this…

In the report, it was claimed that “armed Syrian militants will use territories controlled by the Syrian regime to perpetrate their provocative plan.”

And as I discussed yesterday, there is very clear evidence that the rebels do have chemical weapons and have been using them against government forces for months.

These weapons have been supplied to the rebels by Saudi Arabia.  Qatar and Saudi Arabia have both spent billions of dollars to support the rebels in Syria, and they aren’t about to give up the fight now.

Needless to say, both the rebels and their financial supporters are absolutely against the diplomatic solution that Russia has proposed.  The following is from a Daily Beast article that was posted today…

The Syrian political opposition is dead set against the brand-new Obama-administration policy to pursue a new diplomatic negotiation with Russia in an effort to avoid a military strike on Syria, saying the delay and possible cancellation of Obama’s strike would only embolden Syrian President Bashar al-Assad.

And according to Reuters, the “Gulf Arab states” are also expressing their displeasure with what is happening…

Gulf Arab states said on Tuesday a Russian proposal calling for Syria to hand over its chemical weapons to win a reprieve from U.S. military strikes would not stop bloodshed in Syria.

But of course Assad never used chemical weapons in the first place.  This is something I discussed at length yesterday, and this point was underscored by a report in a German newspaper today…

Syrian President Bashar Assad has repeatedly rejected requests from his field commanders for approval to use chemical weapons, according to a report this weekend in a German newspaper.

The report in Bild am Sonntag, which is a widely read and influential national Sunday newspaper, reported that the head of the German Foreign Intelligence agency, Gerhard Schindler, last week told a select group of German lawmakers that intercepted communications had convinced German intelligence officials that Assad did not order or approve what is believed to be a sarin gas attack on Aug. 21 that killed hundreds of people in Damascus’ eastern suburbs.

The only ones that are using chemical weapons in Syria are the rebels.

And if they decide to hit Israel with those chemical weapons and they are able to make it look like Assad did it, the consequences could potentially be absolutely catastrophic.

On Monday, Knesset Foreign Affairs and Defense Committee chairman Avigdor Liberman made it very clear that if Israel is attacked with chemical weapons, it will respond “in the harshest way possible”…

The statement was the clearest warning to Assad delivered by a top Israeli figure since the escalation of tension between Syria and the United States.

“The supreme Israeli interest is to remain outside the conflict,” Liberman wrote on his Facebook page. “There are many figures trying to drag us in. We have successfully avoided that and we should continue in the future. That is why Bashar Assad’s threats in various media outlets to expand the conflict to neighboring countries bother me.

Israel has no interest, will or intention to take part in the Syrian civil war, but Assad must understand in the clearest way possible that if he and his regime do not leave us a choice and he attacks Israel or transfers chemical weapons to Hezbollah, Israel will respond in the harshest way possible, including toppling his regime.”

If a single chemical warhead falls in an Israeli city, and if the Israelis believe that Assad is responsible, they will respond by absolutely flattening Damascus.

When threatened with weapons of mass destruction, the Israeli military believes that it must respond with overwhelming force.  So Israel would not respond to a chemical attack by responding with a similar attack of their own.  Instead, their response would be asymmetric and it would be designed to completely end the conflict.

Let us hope that the Syrian rebels are not stupid enough to try a false flag attack against Israel.  It would result in a massive amount of innocent dead civilians on both sides, and it could potentially spark a major regional war in the Middle East which could ultimately lead to World War III.