It turns out that a lot of pro-Obama organizations ended up receiving a lot of “economic stimulus” money.  For example, it is being reported that the Obama administration gave General Electric $24.9 million in grants under the stimulus law.  Keep in mind that General Electric was the corporate owner of NBC, MSNBC and CNBC during the 2008 election.  These various news outlets were absolutely shameless when it came to promoting Barack Obama during the 2008 election.  In fact, MSNBC was more radically pro-Obama than even CNN was (and that is saying a lot).  Apparently Barack Obama was quite grateful for all the help.  25 million dollars is one heck of a tremendous thank you gift.  General Electric was the primary recipient of 14 separate economic stimulus grants.  In addition, the recipients of four other economic stimulus grants hired GE as a contractor.  So is this the way that the game of politics is played in 2010?  Sadly, the truth is that this is how the game of politics has been played for decades in this country.

It isn’t as if GE isn’t doing well.  According to Standard & Poor’s, GE had $156 billion in revenue during 2009.  But we all knew that the “economic stimulus” money wasn’t really about stimulating the economy, didn’t we?

A big percentage of the economic stimulus money went for the pet projects of individual members of Congress and for “payback” to those who helped Obama and other Democrats get elected.

In fact, if you want to get a really good idea of just how much money was horribly wasted by the stimulus law, just check out this great article.

So we shouldn’t be surprised that GE was handed 25 million dollars.  This is the way the world works now.

The truth is that MSNBC could be aptly renamed “The Obama News Network”.  They are perhaps the most clearly partisan news channel that the U.S. has ever seen….

Even Bill Maher (who hates George W. Bush and the Republicans) admits that the pro-Obama coverage by MSNBC has been way over the top….

Liberals whine and moan constantly about the supposed “conservative bias” on Fox News, and yet they have no problem with the extreme liberal bias on MSNBC, CNBC and NBC News.

If George W. Bush had tried to hand Rupert Murdoch 25 million dollars the liberals would have yelled and screamed about it for years.

But when Barack Obama hands his friends at General Electric 25 million dollars hardly anyone notices.

The truth is that both political parties are deeply corrupt and the way that the game of politics is played in this country needs to be seriously reformed. 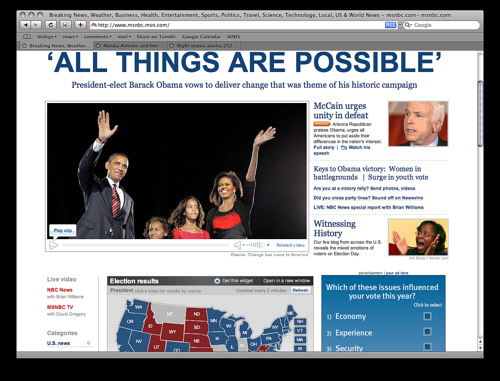