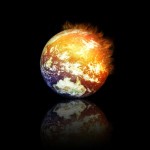 As absolutely brutal winter weather hammers the United States, Europe and Asia, many people are wondering where all of that “global warming” is supposed to be.  After all, if climate change is about to cause absolute devastation to the earth, shouldn’t we all at least be able to enjoy some mild winters in the meanwhile?  The truth is that this winter is making an absolute mockery out of the climate change crowd.  It simply does not make sense that the earth is massively heating up when we are experiencing record cold temperatures and record-setting snow storms all over the globe.

So just what is going on with the weather?  Well, it is actually the sun the drives global warming and cooling, and right now we are in a cooling cycle.  To learn more about the science behind this, just check out this article.

In any event, the truth is that even the common man or woman on the street can put 2 and 2 together this winter and realize that this whole “global warming” thing is not all that it is cracked up to be.  The following are just 8 reasons why this winter is making a mockery out of the climate change crowd….

#1) Global warming?  Record-setting cold temperatures and brutal winter weather have been sweeping North America, Europe and Asia with no end in sight.

#2) Global warming?  877 snowfall records were set or tied in the United States in just one week in December.

#3) Global warming? A massive storm barreling into the Upper Midwest just before Christmas stirred up a blizzard that some meteorologists said was stronger than just about any storm seen in South Dakota in the past 40 years.

#4) Global warming?  Winter has only just begun and 50 percent of the U.S. was already covered in snow at one point in December.

#5) Global warming?  The death toll from winter storms across Europe has risen to at least 80 people, as arctic temperatures and heavy snow continue to plague the continent.

#7) Global warming? Even Barack Obama has been impacted by this winter weather.  In fact, Obama had to leave the United Nations Copenhagen summit on global warming because of a record setting snow storm back home in Washington D.C.

#8) Global warming? In the wake of the Copenhagen climate change summit, many delegates returned home only to find record-setting subfreezing weather hammering their home nations throughout Europe.  Sometimes it seems like someone up there has a beautiful sense of humor.