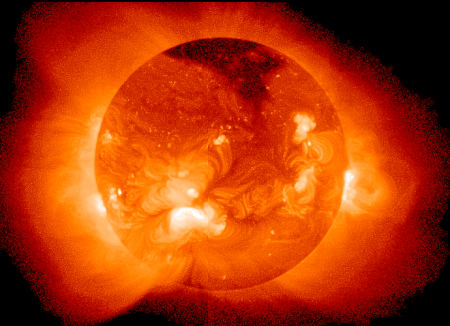 Something is up with the sun.  It has begun to behave very erratically, and scientists don’t know quite what to make of it.  Sunspot activity appears to be slowing down with each new cycle and absolutely gigantic holes have started to appear in the sun.  At the moment, the sun is approaching the peak of its 11 year cycle, and an increasing number of scientists are becoming concerned about what the next cycle will bring.  If sunspot activity continues to diminish, could the sunspot cycle eventually die altogether?  Is it possible that we could be approaching another ice age?  Even worse, could the increasingly erratic behavior of the sun be an indication that the sun is dying?  Traditionally, scientists have taught that the sun won’t die until billions of years from now, but in recent years astronomers have observed stars similar to our own sun suddenly begin to behave very erratically and then rapidly die.  Is it possible that the same thing could happen to our sun?

It is a fact that the current solar cycle has been the weakest in 100 years.  This has many scientists searching for answers…

What’s even weirder is that scientists, who aren’t usually shy about tossing hypotheses about, are at a loss for a good explanation.

Of course most scientists insist that everything is going to be okay and that we don’t have a thing to be worried about, but others are not so sure.

For example, Matthew Penn of the National Solar Observatory believes that a new ice age may be on the way…

Penn offered another, more catastrophic option: the sunspot cycle might die altogether. His team uses sunspot spectra to measure their magnetic fields, and his data show a clear trend: the magnetic field strength in sunspots is waning.

“If this trend continues, there will be almost no spots in Cycle 25, and we might be going into another Maunder Minimum,” Penn states. The first Maunder Minimum occurred during the second half of the 17th century. Almost no spots were seen on the Sun during this time, which coincided with Europe’s Little Ice Age.

Another strange phenomenon that astronomers are watching closely is the appearance of absolutely massive holes in the sun.  Just recently, a massive hole that covered nearly a fourth of the entire surface of the sun made headlines all over the globe…

A space telescope aimed at the sun has spotted a gigantic hole in the solar atmosphere — a dark spot that covers nearly a quarter of our closest star, spewing solar material and gas into space.

The so-called coronal hole over the sun’s north pole came into view between July 13 and 18 and was observed by the Solar and Heliospheric Observatory, or SOHO. NASA released a video of the sun hole as seen by the SOHO spacecraft, showing the region as a vast dark spot surrounded by solar activity.

This comes on the heels of another giant hole in the sun that was spotted between May 28 and 31.

So is this something to be alarmed about?

Some scientists say yes and others say no.

Meanwhile, the weather here on Earth is becoming very erratic.

Just a few weeks ago, high temperatures in the southwest United States approached 120 degrees, and record temperatures are being set all over Siberia right now.

In addition, as I mentioned in a previous article, we seem to be witnessing an increase in the number of earthquakes and volcanic eruptions along “the Ring of Fire” this year.  Recent examples include New Zealand, Peru and Japan.

Does all of this have anything to do with the activity of the sun?

Some people think so.

And what does all of this mean for the future of the United States?  In my new novel, there is a major earthquake along the New Madrid fault line and a major volcanic eruption on the west coast.  I included those disasters in my book for a reason.  Many believe that major earth changes are on the way, and many believe that the sun will play a major role in those earth changes.

Also, could it be possible that the activity of the sun has something to do with the mysterious hum that people are hearing all over the globe?…

It creeps in slowly in the dark of night, and once inside, it almost never goes away.

It’s known as the Hum, a steady, droning sound that’s heard in places as disparate as Taos, N.M.; Bristol, England; and Largs, Scotland.

But what causes the Hum, and why it only affects a small percentage of the population in certain areas, remain a mystery, despite a number of scientific investigations.

And could the activity of the sun have something to do with the strange unexplained sounds in the sky that so many people have been hearing in recent years?

Nobody really knows the answer, but we shouldn’t be afraid to ask these kinds of questions.

The truth is that at some point our sun is going to die.  Virtually everyone agrees on that.  The following is from an article posted on scienceblogs.com…

The fact that the Sun, our Sun, the bringer of warmth, light, energy, and the sustaining force of all life on this planet, isn’t going to shine forever. Quite to the contrary, someday, the Sun will die in a fiery, catastrophic explosion, one which will quite possibly obliterate our entire planet, and then eventually cease to shine at all.

Most scientists believe that we are still “billions of years” away from that happening, but not everyone agrees.  And when our sun does die, it is likely going to look something like this…

Basically, the sun’s chemical make up will cause it to grow twice as bright and twice as big as it is now, thus increasing Earth’s temperature from a mean of 68 degrees Fahrenheit to 167 degrees Fahrenheit and completely obliterating our planet’s oceans. That’s just the start.

Eventually, the sun will increase to a size 166 times larger than it is now, and literally melt Earth’s mountains, creating a planet dominated by flowing lava. As the sun grows bigger, its atmosphere will be shot off into space, pushing everything around it further away. Once that period ends, and once the sun basically runs out of fuel, it’ll approach the end of its cycle, and actually increase even more to 180 times the size it is now while also becoming thousands of times brighter.

So how soon could that happen?  Is it possible that the sun is rapidly running out of time?