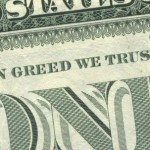 Mania and the Economic Meltdown of Society

During a period of the Dutch Golden Age prices of tulip bulbs reached extraordinary levels. Single tulip bulbs were bought and sold for small fortunes, making some very wealthy. It is widely considered the world’s first speculative bubble and, like all bubbles, it suddenly collapsed. The period is popularly referred to as “tulip mania.”

There have been numerous manias since the tulip craze of the 17th century. Recent bubbles include the dot-com bubble and many real estate bubbles around the world. In bubbles products and assets trade at considerably inflated values compared to their intrinsic ones.

Today, we are at the end of a period of wealth and excess like the Roaring Twenties. This time it is the value of money itself that has been distorted, and the pursuit and concentration of wealth without a relative productive merit to society that has reached the point of mania.

We have come to this point because of corporations and financial markets without integrity, and a government subordinate to these engines of speculation, manipulation and corruption with an unchecked power of capital accumulation.

The Founding Fathers granted Congress the authority to coin money and regulate its value, and Thomas Jefferson was deeply mistrustful of private banks and fiat currency. One wonders what Jefferson would say now, as the Federal Reserve, a privately owned bank that controls the money supply of the United States, debases the currency and fuels inflation.

The recent rally in the markets was not based on economic recovery but rather on fiscal stimulus. Money rolling off printing presses and ultra-low interest rates have distorted the value of money, and forced investors seeking higher yields from bonds into equities. All this cheap money encourages malinvestments that will harm the economy when they go bust.

The excess liquidity created in large part by the Fed’s rounds of quantitative easing helped cause inflation to surge worldwide. Food riots became full-blown revolutions and the price of oil soared, pushing the prices of goods up even further.

Many were duped before the financial crisis by the media buffoons who cheered as the treasuries of banks and firms swelled to sizes unseen before. They used their television and radio programs to convince the public that they too could be rich, that it was as easy as signing an adjustable-rate mortgage, and that there was no end in sight to this bull market.

We would have been wiser to recall words often attributed to Abraham Lincoln when he purportedly wrote that “corporations have been enthroned and an era of corruption in high places will follow, and the money powers of the country will endeavor to prolong its reign by working upon the prejudices of the people until the wealth is aggregated in the hands of a few, and the Republic is destroyed.”

In 2011 as corporations once again post record profits, the cheerleaders are back. For these courtiers who parrot official propaganda, corporate profits are the only economic indicator worth looking at.

After our last flirtation with total economic meltdown those we elected on populist platforms bailed out the ruling class of this kleptocracy. The impoverished throngs clamored for heads. Then the outrage slowly dissipated, and many people were left to scoff at the corporate bonuses printed in newspapers read in the waiting rooms of unemployment offices. Meanwhile, “too big to fail” only got bigger.

We should have learned that these bloated, heartless entities were not benevolent creatures. Instead, we accepted as truth the lie that we could not survive without them. So we continued to feed them, and consumption became a patriotic duty. As the German writer Johann Wolfgan von Goethe, born 1794, put it, “None are more helplessly enslaved than those who falsely believe they are free.”

Government is largely to blame for our servility. It gives free rein to mega corporations that lobby Capitol Hill and offer campaign contributions, placing corporate interests above public ones. Like Bernie Madoff, it promises impossible returns. It runs its Ponzi scheme Social Security—which will run a $45 billion deficit this year according to the Congressional Budget Office—taxing younger generations for the entitlements promised earlier to others. It embodies fiscal irresponsibility running historic debts and deficits, and citizens are encouraged to spend beyond their means. This government is not the “wise and frugal government” envisioned by Thomas Jefferson.

It was those entrusted with protecting the public who allowed financial institutions to regulate themselves. These institutions traded and insured each other’s toxic assets. Ordinary people are to blame too for being fooled into believing they were richer than was ever possible. Those who warned about the dangers of derivatives such as Brooksley Born, former chairperson of the Commodity Futures Trading Commission, were quickly silenced. Those who championed deregulation such as Alan Greenspan, former Chairman of the Federal Reserve, were our mania’s rock stars.

When a meltdown became imminent, Wall Street turned to the government. The most capitalist country in the world suddenly became more socialist, forgot all about moral hazard and nationalized failing companies. The Fed turned on its printing press, buoyed corporate profits, and now we will need to tackle inflation combined with economic stagnation.

Ben Bernanke, Chairman of the Federal Reserve, feels you cannot have destabilizing inflation—an increase in the money supply causing prices to rise—with a high rate of unemployment. The same reasoning kept monetary policy loose during the 1970s when oil prices soared on Middle East turmoil. The cost of food and fuel rose, the economy stagnated and the dollar depreciated. But even when it bears so many similarities to the present, why learn from the past?

What will happen in the United States when its loose monetary policy becomes untenable? The overall public debt of the United States is over $14 trillion—nearly 100% of GDP—and since foreigners hold much of that debt the interest payments are leaving the country; unlike in Japan where payments are made to its own citizens. As the debt increases, interest rates will rise and payments will swell.

Municipal and state governments are broke, pushing combined government indebtedness to levels unseen since the end of World War II. Repayment of debt was made easier after World War II by a booming labor force, an abundance of natural resources, a growing manufacturing sector, high personal savings and demand for consumer goods. This is not the case now.

Those with employment may not feel the situation is so dire unless they scrutinize economic data when it is released. The confusion is unsurprising given the habit of many commentators and news organizations of focusing on the more optimistic numbers of usually mixed financial data.

In order to have a more accurate gauge of the current economic climate people would need to read through the headlines. Consumer spending rises! (But consumer sentiment fell in March at the fastest pace since the financial crisis began; jobless claims rose in the first week of March; and Americans are once again turning to credit.) Unemployment is down! (Because many have given up on finding work altogether; the labor participation rate is at its lowest since the early 1980s, and the real unemployment rate, removing statistical distortions and adding long-term discouraged workers, stands at around 22%.) Corporate profits are up! (Home prices are falling, foreclosures are mounting and inflation is rising.)

Recently the U.S. trade deficit jumped 15%, and to buy all this imported stuff American consumers are relying more on credit as shown in the Fed’s Consumer Credit Report. The U.S. budget deficit for February hit an all-time record of $223 billion, the largest monthly deficit in U.S. history. The deficit for the first five months of fiscal year 2011 was a whopping $642 billion. As the Republicans and Democrats fight over the budget it is clear the government has no plan on how to manage its entitlement spending, especially as the population ages and health care costs mount.

The truth Americans will come to realize is that the “recovery” was never as surefooted as some made it out to be, and that the situation is quite dire. Big cuts in government spending at this point will likely drag down a fragile economy which is not self-sustaining; to continue this kind of spending (or to roll over its debt) the U.S. will need to borrow more and lenders will demand higher interest rates that will increase the borrowing costs of the government; if interest rates do not rise the Fed and central banks could be the only buyers of U.S. Treasuries and, as the U.S. monetizes its debt, exported inflation and the social unrest it fuels will punish the economy while the dollar collapses.

The billionaire real estate magnate Sam Zell recently warned that Americans should be prepared for a 25% reduction in their standard of living when the U.S. dollar loses its status as the world’s reserve currency. Already France, Russia, China and others are moving away from the dollar, proposing that commercial exchanges be done in other currencies.

PIMCO, the world’s largest bond fund, recently announced it has dropped all of its U.S. Treasuries. The Fed has been buying 70% of Treasuries issued, and many wonder who will fill that buying demand when the Fed’s quantitative easing program ends. Muni bonds can no longer be considered safe as the threat of defaults looms.

The Eurozone with Greece, Ireland, Spain and Portugal is in dire straits as well. The United States has not been alone in running its printing press while accumulating debt. But it helped set the pace. The United States is the lynchpin of this global economy, so it is likely the death knell will sound here. It is a matter of time before the young, educated and restless, forced to face the fact that their generation will be the first to experience a lower standard of living than the previous generation, will form riotous crowds on the streets of America.

It will start with a nasty bout of stagflation. That word will become vernacular. Then may come the double-dip recession. A meltdown, when it happens, will come quickly because such is the nature of panic. Those left with the means will run to gold and silver, time-tested stores of wealth. This too will reach the point of mania, and bubbles will fizzle in champagne flutes for a few, until that one bursts too.