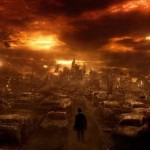 For the most part, Barack Obama has done a horrible job when it comes to keeping his promises.  But when it comes to nuclear disarmament, it looks like he intends to be a man of his word.  During the 2008 presidential campaign, Barack Obama openly set a goal of a world without nuclear weapons.  At the time a lot of people did not take him seriously, because after all, who in their right mind would suggest that the U.S. should give up having nuclear weapons?

Well, apparently Obama was quite serious.

But shouldn’t you wait until you negotiate with the other side before you declare that you intend to give up a large percentage of your weapons?

Well, apparently that is not the way things work in Obama World.

In fact, Obama’s obsession with getting rid of nuclear weapons is creating quite a bit of friction between him and the boys down at the Pentagon.

On Monday, Obama met with U.S. Secretary of Defense Robert Gates to discuss the “Nuclear Posture Review” which was supposed to be published in December but which was delayed because Obama did not consider it radical enough.

Apparently the brass over at the Pentagon is very resistant to dramatically change U.S. policy regarding nuclear weapons, but Obama is very clear about what he wants.

According to one senior administration official quoted by the New York Times, Obama wants the Nuclear Posture Review to commit to a drastic reduction in the U.S. nuclear arsenal….

“It will be clear in the document that there will be very dramatic reductions — in the thousands — as relates to the stockpile.”

In fact, during the campaign he very clearly told the American people that it was his intention to set a goal of a world without nuclear weapons….

Since being elected, Obama has been working hard on negotiating a new nuclear arms reduction agreement with the Russians.  Under a memorandum of joint understanding signed last July, deployed nuclear warheads for both the United States and Russia will be reduced to below 1,700 on each side within seven years of signing a new treaty.  That represents a radical reduction by both sides.

So are we likely to see a new treaty soon?

Well, Russian President Dmitry Medvedev said on Monday that Russia and the United States are close to completing negotiations on a new treaty on strategic arms cuts.

So it is getting close.

But besides the cuts called for in negotiations with the Russians, Obama is making unilateral pledges as well.

For example, Obama has pledged that the United States will not develop new nuclear weapons.

In addition, Obama has ended financing for a new nuclear warhead sought by the Bush administration.

In addition, there are rumors that there have been “back-channel discussions” with U.S. allies about whether to withdraw American tactical nuclear weapons from Europe.

All of this comes at  a time when strategic threats around the globe are multiplying.

Once upon a time, Russia was the only serious nuclear threat we needed to be concerned with, but now China and North Korea are very serious threats, and nations such as Iran and Venezuela could soon become very big problems as well.

At this moment, the U.S. nuclear arsenal consists of approximately 2,600 deployed nuclear warheads, with another 2,500 in reserve and 4,000 more that are scheduled to be dismantled.

This would mean that that U.S. nuclear arsenal would end up being less than 10 percent of what it was at the height of the Cold War.  Just check out the chart below….

Meanwhile, the Russian military is modernizing their tactical and strategic forces as if they were preparing for war….

*Russian Prime Minister Vladimir Putin said on Wednesday that Russia must improve its space defenses as well as modernize its nuclear arsenal by 2020.

*Russian Prime Minister Vladimir Putin said on Monday that once it has completed work on its own fifth-generation fighter, Russia must proceed with designing a “next generation” strategic bomber.

*Russia has announced plans to buy four warships from France in the biggest defense deal with a NATO member since the end of the Cold War.

But the Obama administration acts as if the Cold War is over and as if Russia poses no threat to the United States whatsoever.

In fact, the Obama administration is acting as if the U.S. really doesn’t need a nuclear deterrent at all anymore.

But what if they are wrong?