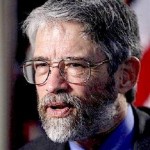 Most Americans have never even heard of Barack Obama’s top science advisor.

His name is John P. Holdren, and he co-authored a book in 1977 in which he advocated mass sterilizations using the food and water supply, mandatory bodily implants that would prevent couples from having children, forced abortions for American couples trying to have too many children and a global police force to enforce population control.

Holdren advocated these horrific proposals in the 1977 book entitled “Ecoscience”, which he co-authored with Paul Ehrlich and Anne Ehrlich.

When reports of Holdren’s book first started to surface, they were quickly dismissed by many because it just seemed so unbelievable that the top science advisor to the president of the United States would hold such bizarre beliefs.

However, once one blogger posted pictures of the pages of Holdren’s book up on the Internet, people started to realize that Holdren really did write these things.

Let’s take a look at some of the more shocking quotes from Holdren’s book.

On page 837,  it is written that compulsory abortion would be perfectly legal under the Constitution of the United States:

“Indeed, it has been concluded that compulsory population-control laws, even including laws requiring compulsory abortion, could be sustained under the existing Constitution if the population crisis became sufficiently severe to endanger the society.”

On page 786, the book says that single mothers should have their babies taken away by the government and that they could be forced to have abortions if the government decides that is best:

“One way to carry out this disapproval might be to insist that all illegitimate babies be put up for adoption—especially those born to minors, who generally are not capable of caring properly for a child alone. If a single mother really wished to keep her baby, she might be obliged to go through adoption proceedings and demonstrate her ability to support and care for it. Adoption proceedings probably should remain more difficult for single people than for married couples, in recognition of the relative difficulty of raising children alone. It would even be possible to require pregnant single women to marry or have abortions, perhaps as an alternative to placement for adoption, depending on the society.”

On pages 787 and 788, the book advocates the mass sterilization of humans by putting drugs in the water supply:

“Adding a sterilant to drinking water or staple foods is a suggestion that seems to horrify people more than most proposals for involuntary fertility control. Indeed, this would pose some very difficult political, legal, and social questions, to say nothing of the technical problems. No such sterilant exists today, nor does one appear to be under development. To be acceptable, such a substance would have to meet some rather stiff requirements: it must be uniformly effective, despite widely varying doses received by individuals, and despite varying degrees of fertility and sensitivity among individuals; it must be free of dangerous or unpleasant side effects; and it must have no effect on members of the opposite sex, children, old people, pets, or livestock.”

On pages 786 and 787, the authors discuss sterilizing women after their second or third child:

On page 838, the authors state their belief that there is nothing wrong or illegal about the government dictating family size:

On pages 942 and 943, the authors call for the development of a “planetary regime” that would control the global economy and enforce population control measures:

Toward a Planetary Regime

“Perhaps those agencies, combined with UNEP and the United Nations population agencies, might eventually be developed into a Planetary Regime—sort of an international superagency for population, resources, and environment. Such a comprehensive Planetary Regime could control the development, administration, conservation, and distribution of all natural resources, renewable or nonrenewable, at least insofar as international implications exist. Thus the Regime could have the power to control pollution not only in the atmosphere and oceans, but also in such freshwater bodies as rivers and lakes that cross international boundaries or that discharge into the oceans. The Regime might also be a logical central agency for regulating all international trade, perhaps including assistance from DCs to LDCs, and including all food on the international market.”

“The Planetary Regime might be given responsibility for determining the optimum population for the world and for each region and for arbitrating various countries’ shares within their regional limits. Control of population size might remain the responsibility of each government, but the Regime would have some power to enforce the agreed limits.”

On page 917, the authors advocate the surrender of national sovereignty to an armed international police force:

“If this could be accomplished, security might be provided by an armed international organization, a global analogue of a police force. Many people have recognized this as a goal, but the way to reach it remains obscure in a world where factionalism seems, if anything, to be increasing. The first step necessarily involves partial surrender of sovereignty to an international organization.”

The truly frightening thing, however, is that Holdren is not just one isolated nutjob.  Rather, his views are an accurate representation of what is commonly believed among the global elite.  They believe that the earth is way too overpopulated, and that if totalitarian measures are not taken it will have catastrophic consequences for the planet.

Those scientists who advocate eugenics and radical population control are funded and promoted by the global elite.  In fact, prior to becoming Obama’s top science advisor, Holdren was the Teresa and John Heinz Professor of Environmental Policy at the Kennedy School of Government at Harvard University.

The truth is that the global elite are absolutely obsessed with reducing the population of this planet, and it would be a huge mistake to underestimate their obsession with population issues.  If you have any doubt about this fact, then you should read this article which we posted on a sister blog.

It is NOT acceptable for a member of the president’s administration to believe in mass sterilization, forced abortions for American women and a global police force.  Please contact your representatives in Congress and ask them to call for the resignation of John Holdren.