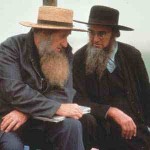 Under the health care reform bill that the Democrats are cramming down the throats of the American people, will all Americans be required to purchase health insurance?  No.  It turns out that there is a “religious conscience” exemption in the health care reform bill that will enable the Amish, as well as a number of other religious groups, to opt out of the mandate to purchase health insurance.  So will the rest of us be able to get in on this action?

This “religious conscience” exemption is in both the House and the Senate versions of the health care reform bill.  Thus it is almost certain to make it into the final version of the bill unless there are some dramatic last minute objections.

So why do the Amish want to be able to opt out of this system?  Well, the reality is that most Amish are disgusted by any type of government assistance.  In most Amish societies, families and neighbors take care of one another.  The thought of participating in a government-run health care system is totally repugnant to them.

But it is not only the Amish that will benefit from this provision.  Other groups such as Old Order Mennonites and Christian Scientists could benefit as well.

So what about the rest of us?

Can the rest of us get in on this action?

If the Amish can opt out of the requirement to purchase health insurance, they why can’t average, hard-working Americans?

Or do we need to invent a religion first?

If so, here are a few potential ideas for new religions which might work…..

*The “You can take your death panels and you can stick them where the sun don’t shine” center for peace, love and forgiveness