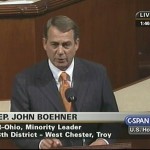 Most of you know by now that the U.S. House of Representatives has passed the health care reform bill and has sent it to Barack Obama to be signed into law.  The government takeover of the health care system will soon be complete and the earliest it will have any chance of being repealed is after the 2012 elections, because Obama will veto any bill that seeks to repeal Obamacare.

But at least there were a few brave members of Congress that fought to the bitter end.  One of them was U.S. Rep. John Boehner.  Boehner made an impassioned plea on the floor of the House in an effort to sway votes, but it was not enough.  However, this speech by Boehner on the floor of the House on the eve of the vote will go down in history as one of the most memorable moments of this entire health care debate.  You have got to check this out….