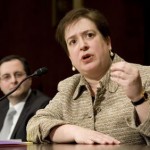 Barack Obama’s latest nominee for the U.S. Supreme Court, Elena Kagan, is almost certain to be confirmed, and that is truly frightening news for America.  Why?  Because the truth about Elena Kagan is beyond shocking.  When she is confirmed, she will become the most liberal member of a Supreme Court that is already extremely liberal.  She is radically pro-abortion, extremely sympathetic to the gay agenda and has no respect for life whatsoever.

Just consider a few of the startling facts that have come out about Elena Kagan….

*After the election of Ronald Reagan, a young Elena Kagan openly yearned for a more “leftist left”.

*As an aide to President Bill Clinton, Kagan took a lead role in fighting a Republican bill to limit abortion.

*Kagan once referred to the Pentagon’s Don’t Ask, Don’t Tell policy as “a profound wrong—a moral injustice of the first order”.

*One newly produced document from the Clinton archives has revealed that Kagan once defended ex-President Bill Clinton’s veto of a bill to ban partial-birth abortions.

*White House memos from 1997, when Elena Kagan was a top domestic policy advisor to President Clinton, show that she recommended that the Clinton administration permit cloning of human embryos for research purposes.

Cloning of human embryos for research?

Is that the kind of future we are headed towards?

Well, the answer is yes if Elena Kagan has anything to say about it.

The truth is that Elena Kagan would give new meaning to the term “liberal activist judge”.  Between Elena Kagan and Sonia Sotomayor, the Democrats now have a liberal core of judges on the Supreme Court that could last for decades.

America cannot afford for Elena Kagan to be confirmed, but with the Democrats firmly in control that is exactly what is going to happen.

This is yet another indication of just how far America has fallen.

The United States is heading straight into the moral toilet, and we have nobody to blame but ourselves.

What a horrible nation we are becoming.