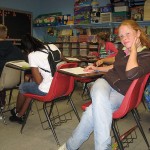 ***The following letter is reproduced on The Truth by the original author, Jimmie Parr.  I think that you will find it very enlightening.***

The reason for my concern about the topic of this letter is that I used to function as a substitute teacher, and once thought about becoming certified as a teacher.

A few weeks ago, a co-worker told me that he was concerned about whether his child was learning any English grammar in his/her 11th-grade English class. As I thought about what grammar lessons I had in high school, I remembered Mrs. Jenkins’ 10th-grade English class, at Robert E Lee High School, in Baytown, Texas (home of the famous Robert E. Lee Fighting Ganders). I remembered Mrs. Jenkins’ lessons about gerunds, participles, and infinitives. I wondered whether this co-worker’s child knows what a gerund is. And I wondered about whether other students know what gerunds, participles, and infinitives are. I have asked several local students (current and former students of Laker High School, and some 11th graders, including the young lady who works in the public library in Pigeon) about gerunds. I have yet to find anyone who knows what a gerund, participle, or infinitive is.

I understand that one of these students at Laker High School asked the above-mentioned 11th-grade English teacher what a gerund is. His response was that he’d heard enough stupid questions from that student, and informed that student that any more “stupid” questions would land that student in the office.

This teacher left himself open to the notion that he doesn’t know what a gerund is. Had he answered the “stupid” question, he wouldn’t leave anyone wondering about whether he—on a taxpayer-funded payroll as an English teacher—knows what a gerund is. Now, several people are left wondering about his fund of knowledge; about the abilities of other teachers at Laker High School, and about public school teachers, in general.

When I was young, I used to hear that the only “stupid” question was the question which wasn’t asked. Times change. Have schools changed? Are some questions asked in class now considered “stupid questions?”

For starters, anyone who heard that teacher tell that student that the question about gerunds is a stupid question needs to hear an apology from that teacher.

I am concerned for the final grade of the student who asked the “stupid” question. That student’s grade could be lowered, significantly, as “payback” for this kind of news about the school getting out. But I am more concerned about the condition of your school, or, at least, of any classes which the above-mentioned teacher teaches. So, at risk of getting that student who asks “stupid” questions in trouble, I am letting you know about my displeasure.

I believe that you people should move to ensure that no student who asks a question pertinent to English grammar in an 11th-grade English class need worry about a grade being lowered. I can tell you that that assurance is not there.

One thing that I find ironic is that I had just heard about another Laker student who was learning about how “free” we are, in this country. Yet, in that same school district, students fear for their grades, because they dare to ask an English teacher what a gerund is.

I will not discuss, in detail, my suspicions that public schools are being “dumbed down,” deliberately. But I believe that the fact that a blue-collar slob informed an 11th-grade student about gerunds before anyone in your school informed that student about them speaks volumes.

I graduated from high school in 1973. I doubt that many people in my graduating class remember what gerunds are, but I do know that we had lessons about them. The fact that I can’t find a local student who knows what a gerund is makes me suspect that Laker High School is not teaching what a gerund is. That makes me think, “dumbed down,” about public schools. And I graduated from a school in Texas, which never has had the best schools.

In closing, I strongly suggest that anyone who cares about students check out John Taylor Gatto’s website, and Charlotte Iserbyt’s website. I happen to know that this English teacher has been teaching, in his English class, that anyone who eats hot dogs is eating cats and dogs. Because he wishes to be controversial, I’d like for that English teacher to bring up the above-mentioned websites in his classes, and attempt to disprove their notions, point-by-point.

Don’t be a passive, “just following orders,” part of a tragedy. Fight it.