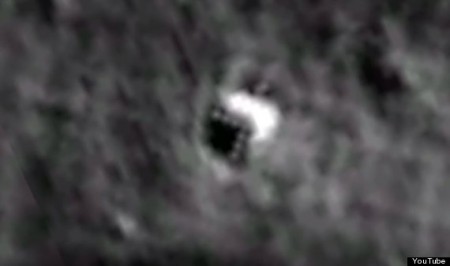 What you are about to see is extremely puzzling.  A very curious “mystery object” has been discovered on the Moon by a YouTube user that was using Google Earth.  I didn’t even know that Google had mapped the moon, but apparently they have.  What this individual found was a series of 7 “lights” that are arranged at a nearly perfect 90 degree angle.  Some have suggested that this weird object could be a spaceship or flying craft of some kind.  If it is, it is far larger than anything ever built on Earth.  Others have suggested that this could be the entrance to a base that is manned by either aliens or humans.  And of course there are yet others that believe that the 7 “lights” are just the result of errors caused by the digital zoom.  In the end, this is a mystery that will probably not be solved any time soon.  Unless we send someone up to the moon to take a closer look, there is no way to tell for sure what is going on up there.

The original YouTube video that started this frenzy about the “object on the moon” has been posted below.  Watch it and decide for yourself what you think it is…

If the “triangular anomaly” is really there, it seems logical that there is a decent chance that it was designed by an intelligent being or beings.

After all, you don’t look at a 747 sitting on a runway and think that it just got there by chance.  Well, you might believe such a thing if you buy into the fairy tale of Darwinian evolution, but rational people do not think that way.

So if that “anomaly” truly exists, someone may have put it there.

But who could have done such a thing?

Is it part of an alien spaceship nestled under the dust of the moon, or a secret moonbase occupied by humans?

Speculation has exploded over these controversial images which appear to show something unexplained on the surface of the moon.

The triangular anomaly, spotted on Google’s map of the moon, has rows of seven light-like dots along its edge that have been likened to an alien base or spaceship.

Of course the UFO community is full of speculation that “aliens” are the ones responsible for creating this triangular structure.  The following is how Tech and Gadget News described this object…

The gigantic shape actually looks like the leading edge of an immense, triangular space ship, similar to, so far, super secret Stealth aircraft technology, but is much larger than any airplane ever built on Earth.

The regularly spaced, circular promontory shapes which make up the seven points on the perfectly formed triangle wedge seem to be intelligently designed.

To date, no other feature has ever been discovered which matches this shape on the Moon, or any other planet observed by satellite or exploratory rover.

The anomaly is so huge, it’s possible it is some sort of moon base used as a facility for storing and launching alien “UFO” spacecraft.

But, if this highly irregular feature of the moonscape is proven to be engineered by intelligent minds, is it possible it could be some kind of secret area built by humans?

What makes all of this even more intriguing is that the exact same YouTube user that made this video says that there is a very similar structure under the ice in Antarctica.  You can find that video right here.

But before you get too excited, there is always the possibility that this could just be a giant hoax.  Just consider what one expert recently told the Huffington Post about this anomaly…

“Basically it’s similar to the thing you get in all those ‘UFO videos’ you see these days from people with digital cameras – when they use digital zoom too much, you get ‘artifacts’ as the missing data is recreated using an algorithm which create regular shapes simply because of the nature of digital.”

So what is the truth?

In this case, I have absolutely no idea.  This could be an absolutely mind blowing discovery or it could be absolutely nothing.  As I mentioned above, to find out more we would really need to send someone up to the surface of the moon to investigate, but that is not likely to happen for a very, very long time.

I don’t really know what to say about any of this.  I just thought that it was interesting.

So what do you think?  Please feel free to share your opinion by posting a comment below…