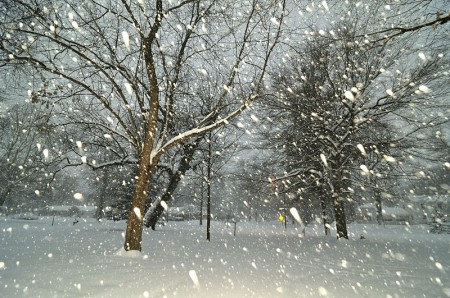 If radioactive snow is falling in Missouri, is it safe to assume that much of the snow that is falling on the rest of the country is also radioactive?  What you are about to see is absolutely shocking.  A highly respected YouTube personality known as DutchSinse has released video of himself measuring radiation levels of the snow falling on St. Louis, Missouri.  What he discovered was that he got a reading that was about twice as high as he did on a sunny day when there is no precipitation.  So what in the world could be causing this?  Could Fukushima be to blame?  Is radioactive water originally from Fukushima being picked up in the Pacific and dumped all across the country?  If so, there would seem to be no way to stop this from happening.  Now that highly radioactive water from Fukushima is spreading throughout the entire Pacific Ocean, it is simply impossible to put the “genie back in the bottle” again.  So could this mean that we might have to deal with radioactive rain and snow storms in North America for many years to come?

According to YouTube user, DutchSinse, who posted a video of him taking the Geiger readings in St Louis, the findings mean that ‘small particles of radioactive material are indeed coming down in the precipitation. Past tests show around 30CPM in the same spot on a nice day with no precipitation’.

You can watch the video for yourself below…

Of course this video is very similar to another YouTube video that I discussed just a few days ago.  In that video, a YouTube user measured levels of radiation on California beaches that were five times higher than normal.

California officials have confirmed that particular radiation spike and say that they are “befuddled” by it, but they insist that we don’t have anything to worry about…

Health officials in California are now telling residents not to worry after a video uploaded to the internet last month seemed to show high levels of radiation at a Pacific Coast beach.

The video, “Fukushima radiation hits San Francisco,” has been viewed nearly half-a-million times since being uploaded to YouTube on Christmas Eve, and its contents have caused concern among residents who fear that nuclear waste from the March 2011 disaster in Japan may be arriving on their side of the Pacific Ocean.

Throughout the course of the seven-minute-long clip, a man tests out his Geiger counter radiation detector while walking through Pacifica State Beach outside of San Francisco. At times, the monitor on the machine seems to show radiation of 150 counts-per-minute, or the equivalent of around five times what is typically found in that type of environment.

So do you believe them?

But authorities in California are sticking to their guns.  The “official story” is that none of this has anything to do with Fukushima…

Officials have dismissed the possibility that it could be linked to Fukushima radiation reaching the west coast, despite forecasts by experts last summer that radioactive particles from Fukushima would reach U.S. coastal waters in 2014.

Last week RT reported that new plumes of radioactive steam were emerging from the crippled reactor number 3 at the plant, but TEPCO representatives refused to explain the cause.

The Department of Health and Human Services has ordered 14 million doses of potassium iodide, the compound that protects the body from radioactive poisoning in the aftermath of severe nuclear accidents, but a DHHS official denied that the purchase was connected to the Fukushima crisis.

Meanwhile, more signs are emerging that something very strange is happening to the Pacific Ocean.  For example, the Los Angeles Times is reporting that “the biggest sardine crash in generations” is causing havoc for fishermen along the west coast…

The sardine fishing boat Eileen motored slowly through moonlit waters from San Pedro to Santa Catalina Island, its weary-eyed captain growing more desperate as the night wore on. After 12 hours and $1,000 worth of fuel, Corbin Hanson and his crew returned to port without a single fish.

“Tonight’s pretty reflective of how things have been going,” Hanson said. “Not very well.”

To blame is the biggest sardine crash in generations, which has made schools of the small, silvery fish a rarity on the West Coast. The decline has prompted steep cuts in the amount fishermen are allowed to catch, and scientists say the effects are probably radiating throughout the ecosystem, starving brown pelicans, sea lions and other predators that rely on the oily, energy-rich fish for food.

So what in the world could be causing that to happen?

Could Fukushima be to blame?

When you start putting all of the pieces together, a very disturbing picture begins to emerge.  For much more on all of this, please see my previous article entitled “36 Signs The Media Is Lying To You About How Radiation From Fukushima Is Affecting The West Coast“.

Look, the truth is that there has been a pattern of covering up the reality about Fukushima for more than 2 years.  Just a few months ago, the BBC reported that radiation readings at Fukushima were actually 18 times higher than previously reported, and hundreds of tons of highly radioactive water from Fukushima continues to be released into the Pacific Ocean every single day.

That means that the total amount of radioactive material in the Pacific in constantly increasing, and considering the fact that some of these particles have half-lives of about 30 years, that means that we are going to be dealing with it for a very, very long time.

The health toll from this disaster is going to be much larger than most of us could possibly imagine.  The following is a quote from Helen Caldicott about how this radioactive material moves up the food chain…

Hazardous radioactive elements being released in the sea and air around Fukushima accumulate at each step of various food chains (for example, into algae, crustaceans, small fish, bigger fish, then humans; or soil, grass, cow’s meat and milk, then humans). Entering the body, these elements — called internal emitters — migrate to specific organs such as the thyroid, liver, bone, and brain, continuously irradiating small volumes of cells with high doses of alpha, beta and/or gamma radiation, and over many years often induce cancer.

Ultimately, millions of people could end up getting cancer and other illnesses as a result of all this, and most of them will never have any idea why they got sick.

It has been estimated that the Chernobyl disaster killed about a million people, and the Fukushima disaster is turning out to be far, far worse.

In the end, what price will humanity pay for the foolishness of a few?